Behind the clock tower is a cozy area few know about. 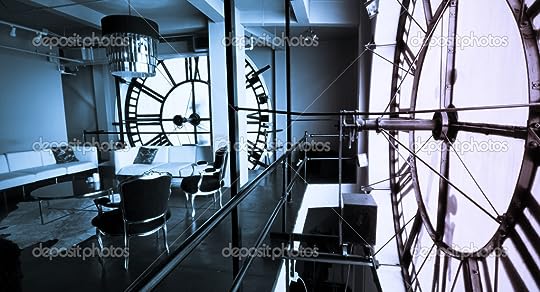 A smile crossed the face of the angel Amitiel as she slipped into the room, two others leaving before she did. Oh she was good. Everyone had known that that couple liked eachother, and she was able to give them just that bit of a push they needed to act on it. So the couple was leaving after a major talk session, and was now officially a couple. Thanks to Amitiel's help, but she knew no one would know that. Or, if they did, didn't think she was worthy of mention.

However, she could live with that. she knew and her brothers knew, and that's all that mattered to her. She settled down in the comfortable white couch, shifting to stretch out on her back on it. The white tanktop she was wearing blended into the furniture, while her black skinny jeans stood out as much as her naturally firetruck hair that had fallen around her head.

Two people had their fingers intertwined as they made their way down the stairs, their faces bright with happiness. It made Sariel grin, mentally giving the pair a huge thumbs-up and a pat on the back - as the humans often do in congratulations. Sariel was perched on the railing, his dark wings spread slightly for balance as he pecked at the rail.

As soon as the couple disappeared onto the lower level, Sariel tipped himself forward. By the time he got his feet onto the ground, he had shifted into his true, angel form. He quickly made his way up the stairs, wondering what it was that the couple had gotten up to here.

As he entered the room, what caught Sariel's attention was the shock of red hair against the white furniture. "Ah, Amitiel," He smiled, giving a small bow in her direction, "Lovely to see you here."

Looking over in slight surprise, Amitiel brightened instantly. "Sariel!" She said happily, jumping up and running over to hug him. Despite being one of the oldest angels, she rarely acted like it. She'd rather be close to her family then all high and mighty, so she had no qualms about just tackle hugging him. Which is just what she did.

She pulled back slightly, though she didn't release him completely. "How are you? I haven't seen you in ages!" She chirped, her brilliant green eyes looking up into his dark brown. She grabbed his hand and tugged him over to the couch to sit next to her, her endless energy bubbling over quite positively as she plopped down beside him, ignoring the twinge that came from the ridges of scars along her back.

This angel was used to humans, and she had adapted many more of their customs than her fellow angels. Whereas many of her siblings stayed all professional and sure, she didn't care. She acted mostly like the young adult she appeared to be, just way wiser than she would have been.

Amitiel was one of the oldest and most powerful angels, so Sariel felt a good deal of respect for her. She was up on a pedestal, and most of the other angels were unsure how to approach her. But Amitiel always acted in a way that made everyone feel equal to her; Sariel never felt uncomfortable around her.

When she hugged him, he staggered back slightly, before wrapping his arms around her and lifting her, spinning her in a circle once. "It's been way too long." He agreed, grinning as he let her tug him to the couch. Her positivity was energising him, and brightening his spirit. "I'm fine, how are you?" He settled on the couch, kicking his shoes off and resting one foot on the table in front of him.

Amitiel was one of Sariel's favourite people to be around. Like him, she was more human, which was a great relief from the coldness of some of the other angels.

Amitiel laughed as she was spun, grinning and curling up against his side when he sat down. Her flipflops were already off, so she didn't have to bother with removing them. "I am doing well, thank you. I don't like this town though. Too many... demons." She admitted, shuddering slightly at the mention and pressing closer to him as if one would jump out at any moment.

She had both a fear and hatred of demons. Sure, she was a powerful and highranked angel. But no emotion powers could fight a demon. She just had to get them to be all peaceful to stop attacking her, then kill them the normal way. Which was not enjoyable. To someone who was in charge of peace and love and things like equality, killing was not a joy. Even demons.

"Have you seen Michael or Gabriel? I haven't seen them around." She frowned slightly as she thought of her other brothers, who she was closer to than any of her other angelic siblings. And the only ones besides Lucifer that were older than her. Heck, she was even close to Lucifer before the whole fiasco, but she didn't trust him, despite how much she still loved her brother.

"Mmm," Sariel murmured in empathy, placing an arm around Amitiel, "I know. But it's something we have to do," He smiled down at her and squeezed her shoulder gently, "Stay strong lovely lady."

The demons did bother him, but he knew Amitiel felt a much stronger hatred and fear of them. Sariel had a more mechanical way of dealing with deaths. For him, it was simply another tick in his mind. Another name removed from the List of the Living.

"Neither have I," He said, absently running his thumb over the skin on Amitiel's shoulder, "I was down with the humans recently - didn't see them while I was there either. Why?" He knew how tight of a bond the angel had with her siblings, so he was surprised that she hadn't seen them.

Amitiel smiled at his compliment, taking full advantage of his arm half-hugging her and cuddling up into his side farther. Flinching just slightly as his thumb ran over a burn that had scarred long ago, she closed her eyes as she rested her head against his shoulder, sighing softly. She was tired. Both physically and just tired of being so close to all the demons around and being so afraid of them. She wished she wasn't, but in a way she knew she deserved it.

"Well, they had to go work out some kind of agreement with Lucy and Lilith and them, so I know they'd be gone for a while. But I want them back here now....." She pouted. She didn't really care that she sounded like a petulant child. She wanted her brothers back where she could see they were safe and hadn't been attacked by demons.

Sariel could feel Amitiel's warmth against his whole side and smiled down at her, gently kissing the top of her head. He was an affectionate angel, and often kissed and hugged his friends. "They'll be back soon, don't worry." He said. He leaned his head on top of hers, brushing a few strands of her hair out of his face as he did so. Her childlike impatience didn't bother him. In fact it was endearing to him that she cared so much for her brothers.

"Let's do something fun - I'm bored," Sariel said, "what's there to do in this town?" He was content to stay here and soak in the relaxation and good vibes the angel gave off but he wanted to do something to get Amitiel's mind off Michael and Gabriel's absence.

"Well..." Amitiel mused, biting lightly on her lower lip in thought. Her powers really didn't apply themselves to activities others could join in, but she was sure she could think of something. "We could go running or skating or swimming or biking or jump-roping or walking or skipping or sunning or swimming or-" She paused to take a breath to go into another bright recitation, then frowned as she realized she had no more ideas off the top of her head.

"I don't know. It depends on what you count as 'fun.' We could.... see a movie? Um..." She trailed off, looking up at him expectantly. It was his turn to either pick something or list some more options he wanted to do.

Sariel chuckled as the angel spouted off a bunch of ideas. He tried to merge several of her ideas into one - making a connection between running, swimming, walking and sunning. "How about we go to the beach?" He said finally. It was a beautiful day - a bit chilly, but lovely nonetheless.

"Ok!" Amitiel chirped happily. She smiled up at him cheerfully, springing up to her feet. She grabbed his arm and pulled on it playfully, attempting to tug him up and to his feet. "Should we run back to my place and get swimsuits or something?" She suggested brightly.

"Definitely," Sariel said, grinning, "I'll race you there!" Yanking the arm Amitiel was latched on to, he pulled himself off the couch, with enough force to make Amitiel fall back onto it. With a quick stoop to grab his shoes, Sariel started running to the staircase. Instead of running down the stairs, he dove off the edge, quickly shifting into his bird form, and swooped down the middle of the spiralling stairs.

"That's cheating!" Amitiel yelped, jumping up and running forward after him. She jumped down the staircase after him, dropping down faster than his bird because of her greater weight. Her white wings flared out and caught herself right before she hit the bottom, and she twisted over to stick her tongue out at him before rocketing off.