To celebrate the release of the post-apocalyptic dystopian novel Zero Hour we are giving away 3 signed copies of the book on Goodreads Giveaway page.

Being thousands of miles from home is always a daunting prospect, but at the apocalypse it’s astronomically unthinkable. Jack Lee was just outside L.A. when the most devastating war the world has ever seen begun. He was also there when it ended, over in almost an instant. Jack survived the attack, but he was on the other side of the country from his wife and son. Not knowing if his family were still alive, Jack sets out on the long journey home, his legs his only mode of transport. To get back to his family he had to survive, but he didn’t yet know the dangers that lay in front of him.

Check out the first review on Amazon.com

Just over 34 Hours to go in the Giveaway 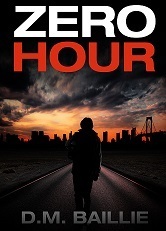 Less than 12 Hours to go in the Giveaway