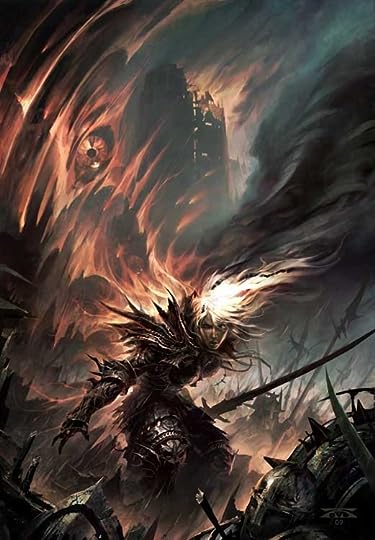 Mod
I never read any Glen Cook. Should I start with The Black Company?

S.E. wrote: "I never read an Glen Cook. Should I start with The Black Company?"

Yes, this is the best place to start. He has very minimalistic descriptions (we are talking about written annals of the company), but if you get used to it, the series is great.

I think my mini-review of the series is appropriate here. I did it to convince one of my GR friend to read the series, she is now a big fan.

The Black Company is a band of mercenaries who are not nice people by any stretch of imagination. Still they always try to choose the lesser evil (there are no good guys in their world). They do grow on you and you begin to care about them.

Speaking about strong women: one of the characters (actually two) can kick the crap of of practically everybody and still be a woman and not Conan the Barbarian after a sex change operation. She also happened to be one of the best anti-heroes in any fantasy book.

Glen Cook is not shy about killing his characters, but he manages to bring the new ones which are as interesting as the departed ones. Military camaraderie, fight of drunken minor wizards, double-crossings and back-stabbings (Cook is a master of these) - it is all there. This series is a father of modern grimdark fantasy. The end of the series is one of the best one in fantasy, on par with The Lord of the Rings.

The series is written as annals of the said company which means the style is fairly minimalistic (you will not find a lot of descriptions of nature, cloths, food, etc.) The puts some of the people off. The writing style grows on you with time, but it might be somewhat problematic initially.

Mod
Evgeny wrote: "I think my mini-review of the series is appropriate here..."

Splendid review, Evgeny. Thanks for sharing. I am anxious to try out Cook's writing style.

The Black Company. yes. But be aware that it's written in a somewhat non-standard style. it took me a little bit to get used to it but I loved it. The first three of the Black company books are terrific in my opinion.

Mod
I remember discovering the series back in the summer of 1990 -- I plowed through them in a matter of days, a couple of weeks, tops, hit the end of Dreams of Steel and had no idea that I'd have to wait another six years to find out what happened next ...

These were the first fantasy novels I'd read that felt as if they'd been influenced more by the Vietnam war (grubby and ambiguous) as opposed to WWII (we're the good guys; they're the bad guys).

and they were influenced by Glen's Vietnam time, Joseph. Yes Seth, begin with The Black Company. I have not yet read but keep adding the titles to my TBR, but I wish to read his Instrumentalities of the Night also.

And I absolutely love Swanland's art!

And if anyone wants insight on Cook's writing style and characters (and you haven't yet read Writing Fantasy Heroes), he has an excellent essay titled "Shit Happens in the Creation of Story, Including Unexpected Deaths, with Ample Digressions and Curious Asides" that sheds light on his methods.

Mod
Jason M wrote: "And if anyone wants insight on Cook's writing style and characters (and you haven't yet read Writing Fantasy Heroes), he has an excellent essay titled "Shit Happens in the Creation of Story, Includ..."

I'm currently in a buddy read of the entire series with two others. Two of us are listening to the audiobook and the other is reading them. I have to say that I love this series. There are some books that are weak, but for the most part all of them are amazing. And I highly recommend the audiobooks.

Mod
On a somewhat related note, the first Dread Empire collection, A Cruel Wind is currently $1.99 on Amazon and the other usual suspects:

Joseph wrote: "On a somewhat related note, the first Dread Empire collection, A Cruel Wind is currently $1.99 on Amazon and the other usual suspects:

The first Dread Empire book is quite weak, being the first published one of the author. The series improves by a lot in the next installments, so do not be put off by a bad start.

Evgeny wrote: "Joseph wrote: "On a somewhat related note, the first Dread Empire collection, A Cruel Wind is currently $1.99 on Amazon and the other usual suspects:

I'll be getting to that one as soon as I finish

Mod
Evgeny wrote: "The first Dread Empire book is quite weak, being the first published one of the author. The series improves by a lot in the next installments, so do not be put off by a bad start."

The series as a whole isn't as good as the Black Company, I'd say, but it's painted on a much broader canvas and has some amazing bits. My favorite Dread Empire book is probably actually Reap the East Wind, which is almost a side story (kind of like The Silver Spike) but which has some amazing set-piece sequences and some great use of battlefield magic.

And after 20+ years, he did finally write a concluding volume, so the series no longer ends on a massive cliffhanger.

I actually like books 2-7 of the series, the conclusion was OK, but not great, but there were different reasons for it and mostly it was not Cook's fault. I mean, we are lucky to have the last book at all.

Mod
Evgeny wrote: "I actually like books 2-7 of the series, the conclusion was OK, but not great, but there were different reasons for it and mostly it was not Cook's fault."

(To summarize: Back in the 1980s, Cook & his wife used to host parties for fandom at their house, and at one such party, some "fan" apparently walked out with the mostly-completed manuscript for what should have been the next Dread Empire novel. For various reasons, including relatively poor sales, Cook pretty much abandoned his plans for the series and turned his attention to things that were selling better, namely the Black Company and Garrett, P.I. books, and there things stayed until I believe Jeremy Lassen of Night Shade acquired rights for the whole Dread Empire series and convinced Cook to write a final volume to wrap things up.)

To the person who stole the manuscript: may the fleas of thousand camels infect your armpits.

Mod
Evgeny wrote: "To the person who stole the manuscript: may the fleas of thousand camels infect your armpits. "

And other, more sensitive areas.

As I think about the timing, I wonder if that could've also had something to do with the delay between Dreams of Steel and Bleak Seasons, or if that was just the story kind of getting away from him.

I like the Dread Empire series pretty well too, although not as much as the Black Company. The writing style is more conventional. I also started with a later book in the series rather than the first. "Reap the East Wind" is indeed a good un.

Mod
If it wasn't for this group, I would likely have never experienced the Black Company. Glad others voted for it and that I finally took the bait. This was great stuff.

Book two is even better. I love this series!

Mod
Athena (Shardbearer) wrote: "Book two is even better. I love this series!"

Actually I am confused with one to buy. I read the 1992 TOR version of the Black Company = Chronicles of the Black Company, which shares the coverart used for an omnibus for books #1-3. Searching on Amazon and reading book synopses, it is not clear there is a #2 by TOR. Seems Like I should get "Shadow's Linger."

Any help here? Which one comes after this:

If you read the omnibus version then you need The Books of the South: Tales of the Black Company

Since you read the omnibus, you've already read Shadow Linger.

Mod
Athena (Shardbearer) wrote: "Since you read the omnibus, you've already read Shadow Linger."
Thanks Athena, Funny thing is that I don't think I read the omnibus (printed in 2007). My version has the same cover, but was printed in 1992 (I think) and only seems to have the first book. Yet TOR did not seem to publish "Shadows Linger" by itself in the mid-90's...opting it seems to re-use the cover for 3 books. Looks like I'll just spring for the omnibus edition.

@Robin, the action is rather intense, and sustained. Some may argue that the pace is so fast and scale so large that readers sometimes get lost; seems like folk in this group tend to be okay with that.

Is it well done or is it just a bunch of guys bashing each other with swords? I'm currently on a martial arts binge, so descriptions of combat would be welcome. After reading Sensei: A Thriller I've become obsessed with all things martial arts. I'll probably read this if the combat is well done. But it's definitely on my TBR it's just a matter of time until I get to it.

Mod
S.E. wrote: "Athena (Shardbearer) wrote: "Since you read the omnibus, you've already read Shadow Linger."
Thanks Athena, Funny thing is that I don't think I read the omnibus (printed in 2007). My version has th..."

The last paragraph in The Black Company is "Thirty-seven years before the comet returns. The vision has to be false. I'll never survive that long. Will I?"

If that's the last thing you read, then yes, you want Shadows Linger, or to jump into the second part of the first omnibus.

Thanks Joseph! I am on to Shadows Linger.

@Athena, oops/sorry...adding to the confusion is some of the links within goodreads confuse the single vs. omnibus edition. It may be too difficult to untangle the mess, but I apologize to Athena since my links above pointed to confusing places.

@Robin, I think the fighting was well done for fantasy warfare standards, but it does not seem to be as tactical as you crave.

Thanks for the info Seth. I'll get to reading it sometime soon. But right now, I'm just looking for some martial arts fiction. I'll eventually get over my obsession with martial arts. I seem to go through phases whereby I'm particularly keen to read a particular genre. Before martial arts it was military science fiction. Fantasy will get it's turn soon. This will definitely be making it to the top of my TBR.