I've totally rewritten my blurb/teaser for my Verge of History: Rebirth story. I'd love your feedback. I welcome all feedback, but here are questions I'd appreciate answers to:

Renee died in 1996 but her head was cryonically preserved. She has been revived 300 years later in a far-off, desolate world by Sigma, a machine of vast intelligence and uncertain motives. Not a trusting sort, Renee struggles to understand where and why she is. She will come to realize that sometimes the edge of nowhere is actually the center of the universe. As Renee uncovers Sigma's secrets, he'll force her to make the choice that will determine the fate of the rest of her life and possibly the future of humanity.

Rebirth is the opening salvo in the Verge of History epic science fiction series that escapes the familiar trope of a future where nothing changes but the gadgets. Favoring strong scientific realism, VoH posits a very plausible but delightful and frightening future awaiting humanity as a result of a few technologies that are already close at hand today. As a contemporary of ours, Renee carries us firsthand into this startlingly transformed future as she begins her epic journey.

I'd also welcome beta reads of my current progress. I'm 20k words in and maybe 3/4 done. 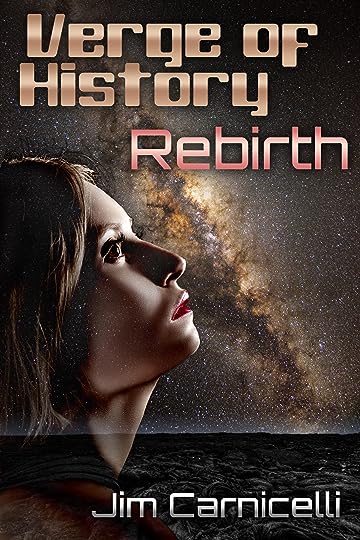 Blurb is getting much better! It's close. Why is the date 1996 important? And just her head? I'd leave this out and let the opening of the story impart these elements. This might work better: "After being cryonically preserved for 300 years, Renee finds herself revived in a far-off desolate world..."

I love: "She will come to realize that sometimes the edge of nowhere is actually the center of the universe."

I'd replace the word "trope." It's a writerly term. How about just "stories"?

1.) What do you think this story is about?

A woman. A machine. (robot? computer?) She'll be at the center of some serious sh*t. I guess that's all I need to know. Your hook is good. I'd read the first few pages.

Not sure what this question means. Am I intrigued? Yes.

3.) Is it the right size and "density" for a short teaser?

Seems about right. Don't want to tell to much.

Wow. Excellent feedback. It's got me thinking about how to tighten up a few other lines, too.

Let me toss a question out to others. I learned the term "trope" in the context of TV shows and movies last year and have been hearing it a lot in sci fi circles, especially with superhero stuff (see tvtropes.com). So my sense it is an emerging pop culture term that is becoming quickly known, especially among my target audience. I may be deluding myself, however. Question: do you all hear this term used in your own circles?

Renee died in the late 20th century and was cryopreserved for 300 years. She is awakened in a far-off, desolate world by Sigma, a machine of vast intelligence and uncertain motives. Not a trusting sort, Renee struggles to understand Sigma’s world and yet find meaning for her life, both before and now. And sometimes the edge of nowhere is actually the center of the universe. As Renee uncovers Sigma’s secrets, he’ll force her to make the choice that will determine the course of her life and possibly the future of humanity.

Rebirth is the opening salvo in the Verge of History epic science fiction series that escapes the familiar trope of a future where nothing changes but the gadgets. Favoring strong scientific realism, VoH explores a delightful and frightening future awaiting humanity as a result of a few technologies that are close at hand today. As a contemporary, Renee carries us firsthand into this startlingly transformed future as she begins her epic journey.

Hi Jim, try this on for size:

When Renee awakens, it's no longer 1996, but 300 years later, and she's not on earth, but a far-off, desolate world, run by Sigma, a machine of vast intelligence and uncertain motives. And the last she checked, she was supposed to be dead. As Renee's new life begins, she faces new struggles, as she attempts to understand Sigma's world and find meaning in her past and an uncertain future. A future where Sigma's secrets unravel and force her to make a choice that will determine not only her fate, but the fate of humanity. Sometimes the edge of nowhere is actually the center of the universe.

--
Put a bit of mystery in the blurb. It's a hook. That's why I left out the cyro stuff. And the part about her not being the trusting sort. We'll learn that in the story. No need to tell us that now. SHOW us in the novel that she's not trusting. And, make me want to read what happened to her and why she's suddenly 300 years in the future. Was she cryopreserved or was it black magic? Again, just plant the question. Let the reader work at finding the answer. Although, I suspect, Sci-Fi fans will assume she was cryopreserved. I'm not a Sci-Fi person. Plus, I'm still curious why 1996 is important. You had that in the original, so it must have significance to the story. Again, the reader will want to know. And if it's not important, then I'd ditch the starting date and readers will assume she's from our present. Which is what you hint at in the last sentence, that she's our "contemporary." I guess it's all relative, but 1996 is almost 20 years ago! No Facebook, twitter, iPhones, texting, twerking, Youtubers, 9/11, etc. Renee is a relic! ;-)

Since you are asking, I'm happy to ramble on about Renee's death year. :-)

1996 is not important, per se. I wanted Renee to be a contemporary of ours, but I didn't want her to be too close to us for several reasons. Most importantly, I am hoping that being a couple of decades behind us means that some of the "future" that Sigma tells Renee about will be our established past. He references 9/11, for example, which was 5 years after she died.

Fiction authors regularly connect dubious future events to popularly known things. The Fukushima disaster awoke Godzilla's nemesis. The Enquirer contains actual news about space aliens (Men in Black). Mayan calendar ending in 2012 predicts that Earth will swallow everyone. No matter how ridiculous the outcome, connecting it to some audience-known premise lends some credibility.

1996 is close enough that most of my readers (for now) will remember how it differs from today. Rebirth is full of little nods to her time, like how Renee thinks a small rack-mounted server looks like a library's card catalog. When was the last time you saw a card catalog? Or how Renee marvels at the idea that some big company started taking pictures down every street in America. I'm hoping my readers will smirk and quietly think, "oh, right; that happened after she died."

I struggled with how to succinctly express this idea that Renee is a wee bit old-fashioned in a blurb. But you're right that exactly spelling out 1996 suggests that the reader should be wondering "what happened in 1996 that's important?" I don't want to trip them up this way. So maybe "late 20th century" will achieve the desired goal better.

Thank you for the alternative rewrite. I'm going to keep rereading it several more times and will probably make some changes in response.

I concur with your point about putting mystery in the blurb. If you haven't had a chance to read my story's opener, I will point out that the things I spell out in the blurb appear almost immediately. Sigma reveals to Renee that she was cryopreserved right on the first page.

Why she was cryopreserved is a mystery, though I'll spoil that by saying it's one that won't be answered in this book. But the big, rolling mystery is: why all the secrecy? She starts out with almost no context to understand what's going on. And while Sigma is explaining in a neat, orderly way, Renee feels he's not telling her what's "really" going on. I could spell out the big reveal in the blurb, but that'd be no fun.

Your suggestion that I leave Renee's suspicious nature out of the blurb has me thinking and waffling. It may be telling too much up front. But I'm hoping that note creates a sense of her character and hints that there is a big mystery. If the main character is suspicious, there must be a truth to uncover, no? Waffling ...

Thanks for excellent, thought provoking feedback. I really do appreciate it.