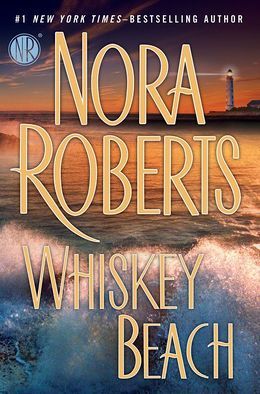 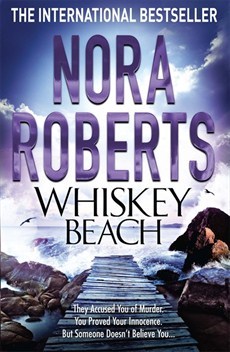 Book synopsis:
For more than three hundred years, Bluff House has sat above Whiskey Beach, guarding its shore - and its secrets.

To summer tourists, it's the crown jewel of the town's stunning scenery. To the residents of Whiskey Beach, it's landmark and legend. To Eli Landon, it's home...

A Boston lawyer, Eli has weathered an intense year of public scrutiny and police investigation after being accused of murdering his soon-to-be ex-wife. And though there was never enough evidence to have him arrested, his reputation is in tatters as well as his soul. He need sanctuary. He needs Bluff House.

While Eli's beloved grandmother is in Boston, recuperating from a nasty fall, Abra Walsh has card for Bluff House, among her other jobs as yoga instructor, jewelry maker, and massage therapist. She is a woman with an open heart and a wide embrace, and no one is safe from her special, some would say over-bearing, brand of nurturing - including Eli.

He begins to count on Abra for far more than her cooking, cleaning, and massage skills, and starts to feel less like a victim - and more like the kind of man who can finally solve the murder of his wife and clear his name. But Bluff House's many mysteries are a siren song to someone intent on destroying Eli and reaping the rewards. He and Abra will become entangled in a centuries-old net of rumors and half-truths that could pull them under the thunderous waters of Whiskey Beach...

Passion and obsession, humor and heart flow together in a novel about two people opening themselves up to the truth - and to each other.

Woo!! I've subscribed to the thread, I've written this on my handy-dandy notepad, and I'm ready to read! Well, once the 10th arrives, hehe.

How do you subscribe to a thread. See there are so many things that I still don't know about GR, will it be easier to find this thread with that?

Just below the last post in this thread, above the comment box and to the right, you will see in gray text, "You are following this discussion" and there is a "edit" link. Click "edit", and then you can choose if you want to receive a digest of this thread, or have each individual post sent to your email as a reminder or just receive notifications. I subscribe to all emails because when I don't, inevitably, GR screws up and doesn't send me notifications all the time. So, if I notice I haven't received notices of certain threads being updated after awhile, I check my email and find them.

Oh. Ok, I usually just check each group I'm participating in once every day to check for updates :)

I'm in for this one.

I'm in and will pick up a copy from the library next week.

I have this one audio so I may join in

Neat. It's been on the to-read for awhile.

I'm in. Have on hold at the library.

I'm looking so much forward to this one :)

I'd like to join in on this one if that's okay. I've put it on hold at the library so hopefully it will come in before the start date.

Someone beat me to my local library's copy so I had to request another one. Should come in quick though.

I'm also in. It's sitting on my reader too long.

I have it on hold at the library, too. I'm the next person in line, so I should have it in time.

I *think* I'll join and read, but I'll decide when I know how I'm getting on with my other books closer to start date.

Got my library copy, I'm in.

I'm picking my copy up from the library today. I might start it tomorrow or Sunday since I'll be looking for a new audiobook to start then. I'd also like to get most of it done before I start on the Codex Alera series read.

I'm starting this up next probably around Monday, Australian time. I'm currently reading a historical and a paranormal so a bit of Nora will be a nice change.

Didn't get far enough into it for anything to happen yet other then the 2 main characters meet.

I have a few books I'd like to finish before starting this one, but I plan to start on it Tuesday.

I might start this tonight but I'm planning to just read a few chapters a day. I am trying to finish a book I started a few days ago, plus I'm reading two others.

I picked up another of her books at the library a few days ago:

. I read a pretty good review of it so I'll be reading that sometime this month or December. I am not sure if I'll do a BR for it or not, guess I'll see if there is interest and if I feel like I can dedicate the time.

I haven't read that one and don't have many BRs for December yet. So I'd probably join you.

I'm already half way through Whiskey Beach. I'll just hold off talking about it for now since I seem to be the only one who started.

I've started too Mary but as we are on the same team I'll hold off for a few days and switch to another book I'm reading.

I did like how straight away Nora set the scene so well, you could nearly feel the salt spray and the beauty of the place. New England is sooo on my travel bucket list.

I live there so I can say it's worth seeing. October is the best month. The changing leaves are spectacular.

I'm starting it today and will be up for talking about it probably in spurts throughout the day.

I've started audio. Have to be honest it took me a while to figure out what's happening. Should probably stay off GR while doing that :P

I might take a break from it today to start the Johnny Cash book and let some others catch up.

❀Tea❀ wrote: "I've started audio. Have to be honest it took me a while to figure out what's happening. Should probably stay off GR while doing that :P"

After reading 40% of it so far, I can totally get that. I got really confused from Chapter 1 to 2 and I'm reading it so audio must have been confusing.

I also now feel like I missed something earlier in the book because (view spoiler)[all of a sudden they are talking about this dowry thing (hide spoiler)] and I feel like Nora could have mentioned that earlier. I'm not sure I really like Eli but I wouldn't mind having an Abra around/hanging out with his grandmother.

Stacie wrote: "I also now feel like I missed something earlier in the book because (view spoiler) and I feel like Nora could have mentioned that earlier. I'm not sure I really like Eli but I wouldn't mind having an Abra around/hanging out with his grandmother. "

I just got to that part. Definitely got me confused until I saw your post. I thought I missed something. :D
I still don't have opinion on Eli. I do feel little sorry for him. But Abra... She might be great with grandma, but with Eli I find her little too pushy. Does he really need that much babying?

(view spoiler)[As for basement thing, that was unexpected. I was sure PI was hired by in-laws. That's obviously not the case. Do you think Abra's ex is behind it? (hide spoiler)]

Hmm. I am also listening to it and have had no trouble figuring out what's happening.

(view spoiler)[Found it! Esmeralda's Dowry was mentioned on page 27 when Eli is thinking about the areas history and the sunken ship Calypso that had the treasure on it which was the dowry and about all the treasure hunters that have looked for it over the years (hide spoiler)]

And yes Tea, (view spoiler)[I am wondering the same thing about Abra's ex but then there was something else that made me wonder if it was just someone who hated him. Maybe the ex wife's lover? (hide spoiler)]

I'll probably finish today. It makes me really want a dog and a trip to the beach.

(view spoiler)[I was thinking about wife's lover too, but why would he dig in the basement? Thats why I'm thinking Abra's ex. He followed fer to Whiskey beach, heard about the story and went for it. Of course, since I still don't know anything about him, except that something happened in Abra's past, I could be wrong. Maybe lover and ex are same guy :P (hide spoiler)]

Mary: Harry Dresden's Love Slave wrote: "Hmm. I am also listening to it and have had no trouble figuring out what's happening.

Thanks Mary! That's what I meant when I said I have no idea what's going on being on audio. First chapter or two passed by and I haven't even noticed what's happened. I was hearing it but not listening. :P

Yeah that happens sometimes with audio books. Many times I have had to go back and relisten to parts because my mind wandered.

I checked out the kindle version of The Cold Dish because I realized that my mind must have vegged during part and someone was dead and I had no clue when it had happened. I did a search on the kindle a reread part.

Good point. My other thought? It's (view spoiler)[Wolfe but at the same time I think Abra has seen him (hide spoiler)].

Okay I finished. I'm waiting for others to finish so we can chat about the last few chapters.

I started last night, and it'd so good - I'm having a hard time putting it down. Why is Wolfe so obsessed? I want to be the grandmother!

So fun fact, the city that Abra is from is right next to mine. It's really this part of the state's only "city" type city and it's not really much of that. But it does have the Basketball Hall of Fame and more than a couple strip clubs and a couple of blocks of small skyscrapers.