Mod
Lord Dunsany (1878-1957) is one of the major figures in 20th-century fantasy, an influence on everyone from H.P. Lovecraft to Neil Gaiman. Now up for order is one of his best books and one of our favorite releases this year, THE CURSE OF THE WISE WOMAN (1933). Long out-of-print (it was last published in the '70s as part of Dennis Wheatley's Library of the Occult series), it returns at last with a new introduction by Mark Valentine. Very highly recommended! 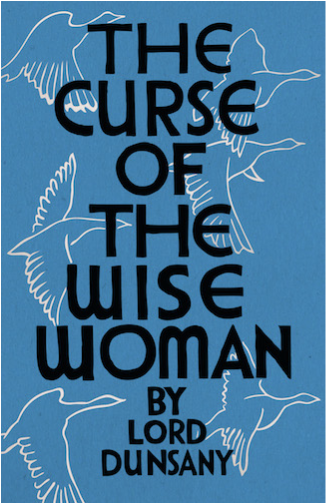 The Curse Of The Wise Woman by Lord Dunsany

After his father’s interference in Irish politics ends with a band of killers arriving on Christmas night to assassinate him, young Charles Peridore finds himself master of the estate. During idyllic school holidays, Charles enjoys riding to hounds and hunting geese and snipe while his friend Tommy Marlin tells stories of Tir-nan-Og, the land of eternal youth that lies just beyond the bog. But when Progress arrives in the form of an English corporation determined to convert the landscape into factories and housing, it appears that an entire way of life is destined to vanish. Only one thing stands in the way: the sorcery of an old witch, whose curses the English workers do not even believe in. In the novel’s unforgettable conclusion, the ancient powers of the wise woman will be pitted against the machinery of modern corporate greed, with surprising and thrilling results.

Lord Dunsany (1878-1957) is one of the most influential fantasy authors of the 20th century, counting H.P. Lovecraft, J.R.R. Tolkien, Michael Moorcock and Neil Gaiman among his many admirers. Regarded by many as his finest novel, The Curse of the Wise Woman (1933), a rich blend of fantasy, nostalgia and autobiography, returns to print for the first time in decades in this edition, which features a new introduction by Mark Valentine.

“Inventor of a new mythology and weaver of surprising folklore, Lord Dunsany stands dedicated to a strange world of fantastic beauty . . . unexcelled in the sorcery of crystalline singing prose, and supreme in the creation of a gorgeous and languorous world of incandescently exotic vision. No amount of mere description can convey more than a fraction of Lord Dunsany’s pervasive charm.” – H.P. Lovecraft

“There is a seam of memorable beauty running through the whole story.” – Seamus Heaney, The Listener

“This story shows Lord Dunsany at his best. His imagination, and his mellifluous prose, are to be found in it; but more than most of his books it keeps its feet upon earth . . . it has the singular, melancholy charm of something solid and yet hazy, like the woods in autumn.” – Saturday Review

“[N]o reader will forget the final wild scene . . . There is a strangeness and beauty and sorrow here, and all within a small and unobtrusive frame.” – Bookman

*Please note, this title is US/Canada only at this time but we're working on expanding the rights.

oh my gosh! You are throwing temptations at me on nearly a daily basis!

This will be my first one, Nancy.
I'm a Dunsany virgin. :)

You're in for a treat, Charlene!

The Curse Of The Wise Woman (other topics)