I am always so disappointed that Utah has so little culture to enjoy. It was cool that in 2002 we did host the Olympics putting us on the world map at least, but I didn't even live here at that time so it didn't really affect me anyway.

But I was pleasantly surprised to walk down the street in Park City and pass a Banksy on the wall! I had to take a picture and share it with you all.

Since a lot of his work has some sort of message, I'm curious to know what your thoughts are as to what he is saying in this particular piece. Any comments? Please share! Hopefully you can see it well enough through the glass. 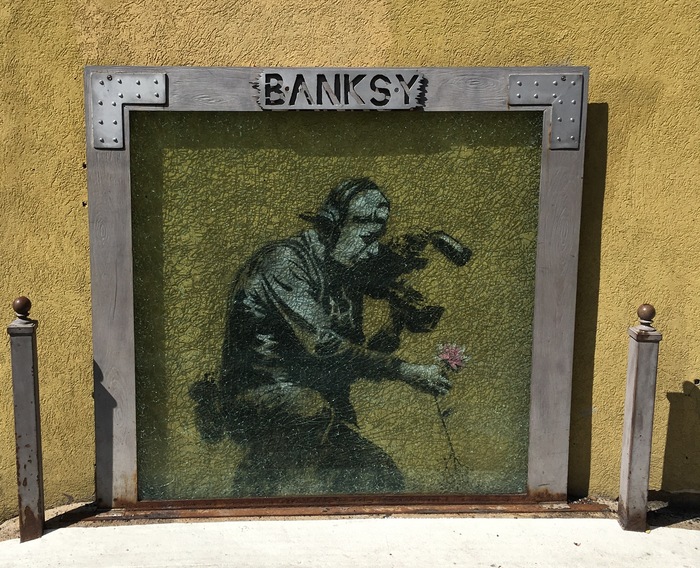 It looks like the photographer has pulled the flower from the soil since the roots are showing. He's destroying something beautiful at the same time as he's preserving its beauty on film.

Do you think it's authentic? It's always difficult to know.
It certainly looks like it.

Why wouldn’t it be? I would think it was here during the Olympics in 2002 and I just never noticed it before. But obviously someone thought it was authentic...

Just found an article and it's seems the real thing, there is more than 1 and they appeared in 2010 during the Sundance Film Festival:

One of the last films to get announced was also its biggest: Exit Through the Gift Shop. Focusing on the graffiti art movement, the film was directed by Banksy and it featured many of the biggest artists in the field on camera and explaining how they work. 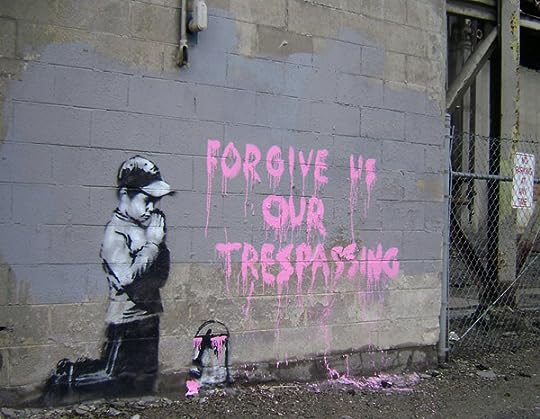 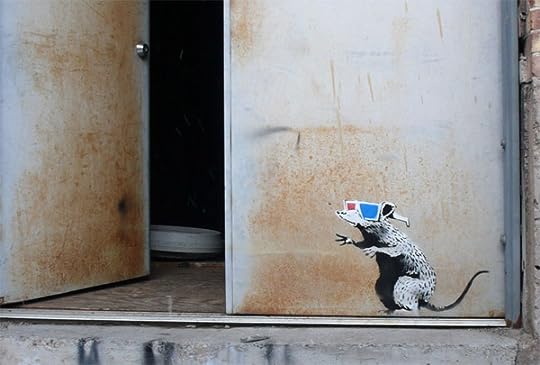 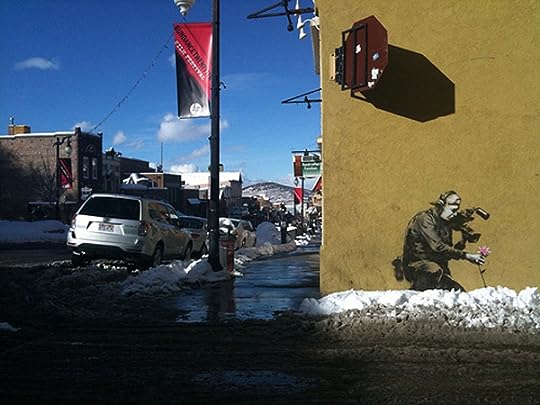 Exactly, Dirk. I just found an article, too. It coincided with a Film Festival in Sundance with a documentary that Banksy directed in 2010. The second one was destroyed and this one the glass is shattered because they attempted to destroy it, too.

PARK CITY — It's both sad and a bit ironic. The world-renowned street artist famous for his graffiti drawings had his own murals defaced in Park City.

Banksy is an anonymous street artist from the United Kingdom. He is known for his political, satirical and sometimes humorous street art.

In 2010, two of Banksy's pieces appeared along Main Street in Park City. They coincided with the 2010 Sundance Film Festival and the release of a documentary he directed called "Exit Through the Gift Shop."

Shortly after 8:30 a.m. Tuesday, police received a call reporting that the glass casing over a Banksy piece outside Java Cow Cafe and Bakery, 402 Main, had been damaged, according to Park City Police Sgt. Jay Randall. The vandal apparently was unsuccessful in trying to break the glass covering the depiction of a cameraman uprooting a flower.

The responding officer spotted another damaged Banksy piece, a mural of an angel located near the steps to the garage at 537 Main, on his way to the scene. The glass covering on the mural was shattered and the piece entirely blocked out with brown spray paint, according to police.

The officer collected evidence at both scenes and found footprints. Video footage showed a white man taking a blunt object to the case of the Banksy piece outside the Java Cow Cafe and Bakery around 2 a.m. Tuesday, Randall said.

No footage was available for the piece at the parking garage.

Police could not give an estimate the value of the damaged art because it was not sanctioned or paid for, Randall said. However, the owner of the parking garage estimated the damage to that piece at $15,000.

If the vandal is caught, he could face criminal mischief charges ranging from a misdemeanor to a felony, depending on what a judge and insurance companies determine, Randall said.'

Banksy is a man who chooses to keep his identity hidden, but his artwork pops up all over the world, often with politically charged themes. Some have called Banksy's murals vandalism, others have labeled them as works of art. In Park City, they're iconic.

"It is such a shame, heartbreaking even," said Robin Marrouche, executive director for the Kimball Art Center on Main Street. "Banksy's voice and importance in our culture today is significant, and the vandalism against his street art is just as upsetting as vandalism you read about against works by important artists of earlier times."

Whitney Tassie, curator of modern and contemporary art for the Utah Museum of Fine Arts, said she doesn't believe Banksy created his art to be preserved. 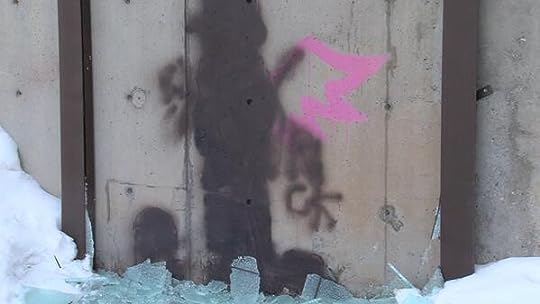 "It's always a shame, I think, when his work gets defaced," Tassie said, but as a graffiti artist, Banksy knows that his work is open to being either defiled or added to.

"Anytime that he makes a work, he knows that it's open for any other graffiti artist" to adjust or reframe how they want, she said.

But the real question may be, how does one vandalize vandalism? Many say that Banksy was breaking the law when he painted the murals in the first place.

"In the eyes of the law, yes," said Cory Aliinson, Park City Police Department. "As far as the business owners say, they're happy to have it and support it."

They supported it so much, they even paid to install protective glass over the artwork.

Jude Grenney operates J-Go Art Gallery on Main Street and welcomed the so-called "graffiti" when it first appeared on her building.

"I thought it was fabulous," she said. "I felt fortunate that he was able to do a couple in town. The more we know about street art, the more we can appreciate it. Banksy is the best."

Park City Police said they're following up on several leads. If you have any information, you can call their anonymous tip line at 435-615-5500.

I found different articles that showed the two above defaced pieces—the one Dirk posted and the angel one I posted. I did find a Wikipedia post on the Trespassing piece that Dirk posted that claims it to have been painted in the city of Salt Lake but I did read some articles that put it in Park City so I can see where he got that one. I wish I knew that was there so I could have seen that, too! Apparently, the mouse was taken down to avoid it being ruined.

Hey Dirk, I noticed that you contributed some great comments but didn't answer my above question as to what you thought was the meaning of his above picture? Would you feel to share your ideas?
Or anyone else?

Did you watch the docu?
It starts with a Frenchman, Thierry Guetta, a French immigrant in Los Angeles, and his obsession with street art. He lived with a camera in his hand always filming and one day he starts to follow graffiti artists and he does this for a couple of years until the only one he hasn't filmed is Banksy. Then one day when Banksy is in LA to do some stuff, his helper is refused entrance to the States and he is looking for some help and so ends up with Thierry following him and later coming to London and even filming the trip to Jerusalem.
But Thierry only films stuff, hours and hours and then he just stuffs the films in boxes. He never "makes" something worth watching until Banksy urges him to make a film. From this "movie" some fragments are shown in the docu, it's really unwatchable ;-)
Banksy then orders Thierry back to LA and takes a shot at making it watchable.
But that is only half the story.
Back in LA Thierry decides to become an artist, he takes on the name Mr Brainwash and wants to make an immediate impact on the art scene with one of the biggest exhibitions ever...

Maybe the man with the camera refers to this Thierry?

That is a good point. And it could be attributed to the camera man, but I think there is some deep significance in the fact that the flower is the only dominant color in the piece and that it is being uprooted as it is being filmed. What do you think of that? Any ideas?
(Of course, it is very difficult to see in my picture that the flowers is showing roots because of the shattered glass)

OMGosh! I have had such limited art history training, education, even any real interaction with people who are actually interested in art. Most of my knowledge comes from my own reading. This is true also in my reading of neuroscience, when I read about the brain.
I read words, names of artists, paintings, areas in the brain (like amygdala for example) and I've never heard them pronounced so I end up just making up my own pronunciation. In fact, I started studying the brain around 2002, and it wasn't until 2013 that someone actually corrected my pronunciation of 'amygdala'. That was embarrassing!

Just now, rereading these posts, I noticed that I have misspelled Banksy's name all along and the reason is because I have mispronounced it this whole time!
When I saw his work on the wall in Park City, I got so excited! I yelled out loud "It's a Banksy! It's a Banksy!" Nobody was around it when I had seen it. But I had the guy I was with take my picture next to it and we gathered quite a crown and everyone was taking pictures of it. Now I wonder how many of them had heard of him and knew I was saying his name wrong! lol
Oh well, now I know! How many of you have gotten a good chuckle out of me? ;)

No chuckle from me ;-)
I didn't realize you misspelled his name. How?

Did you know his first idea for a name was "Robin Banks"?

Yes, it went from Banks to BanKSy but I was writing and saying it BaNSKy and thought it sounded better. I think I had just read it wrong at first and never noticed anytime I read it afterward until today when I looked at the picture I took in Park City. It has his name above the glass over his art and I thought THEY spelled it wrong because personally, I like the sound of mine better. Lol. But going from Banks to BanKSy makes more sense.