Mod
Make your Character here. Oc's and cannon are aloud

Mod
Name and bio: Ice a soul reaper with no group, very quiet and calm, likes to drink and enjoys reading and music, does not enjoy fighting but will if have too, responsible but can be fun at times, most of the time alone.

(i do not have soul reaper clothes)

tries to not get into fights, and is amazingly good at shunpo (flash step)

good at parkour and fast.

Quote: "alright you deal with this ima go take a nap"

reply | flag *
message 5: by [deleted user] (last edited Sep 16, 2019 12:26PM) (new)
Sep 13, 2019 08:46AM
Name: Luciel Lucitor Valentine
Age: 16
Gender: Male
Species: Human (Hell Hound)
Appearance Description: Luciel has white hair and pale blue eyes. His skin is also rather pale. He's often wearing a spiky green and purple bracelet, and a necklace with a respirator key chain on it (like the one's they wear when there's a lot of radiation around.) He also has two piercings on his lower lip. He has tatoos all along his back and chest. On his chest, where his heart should be, is a tattoo of a heart with a arrow through it, much like's Cupid's arrow. He also has a large tattoo of a snake surrounding a Raven, seemingly fighting.
(view spoiler)[ 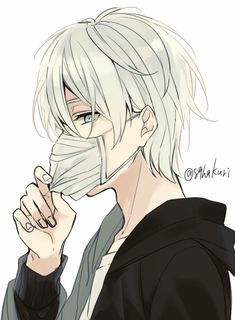 (hide spoiler)]
Abilities: His quirk is called Hell Hound. It's basically like a hybrid quirk like Shoto, but it's ice and a wolf-based quirk. He can turn into a canine that can basically manipulate the temperature and ice. He can not make things hotter, only colder. It's called "Hell Hound" because the quirk is based off of how Hell used to be before they changed it in some religions. Hell used to be cold, as "God's light did not shine" upon the crooks of hell. He doesn't often use his quirk, but as it is a mutation quirk, his ears and tail aren't really something he can hide, so they kind of are always there and is practically a part of him and his identity.
Likes: Sweets, animals, Coffee, Females (Not in the sexual way), pastel colors,
Dislikes: Most people, Anything burnt, Strong Scents, being in new places and around new people, most cats, green
Fears: The Dark, Feeling Helpless, Lightning, Intimacy
Sexuality: Homosexual
Anime: BNHA
Background:

Well, as you can imagine, he didn't exactly have it easy. Growing up was basically just trying to survive with the least amount of injuries. His father was well, the CEO of his own company in South Korea. Having been an immigrant from Germany, he did surprisingly good for himself. Luciel's mother was from North Korea, having managed to make it to South Korea after running away from her parents as a teenager. She fell in love, and well, had Luciel. However, the man she married became more and more cruel. As Luciel grew older, he had difficulty developing. While he did grew, he had problems with speech development. He could not be a good heir if he couldn't even talk properly. His father, naturally, wanted to rid himself of the nuisance and have a new child, one capable of being actually useful. However, she was not capable of birthing another child, as Luciel even coming into the world was a miracle, as he was expected to be a miscarry. Even so, she refused to get rid of him, however, in order to make her husband happy, she paid for Luciel to take speech development classes. While Luciel grew wary of his abusive father, his mother always seemed to make everything better. She was cheerful, warmhearted, and kind. She always taught him to help others, and naturally, he grew to respect her, which is why he's nicer around females in the present. However, as he grew older and his eighth birthday was growing near, he was making his way home from school. He saw his mother struggling against a criminal, a common thief, so, naturally, he rushed in to try to help. The criminal pointed a gun at Luciel, however, the small boy never received the bullet. Instead, his mother did. The crook ran. He was a murderer, and it wouldn't be long before the police showed up. After that, Luciel became solemn. His mother was the only one he could call family, someone he looked up to. He was absolutely devastated. His father was too. Even if he was cruel, part of him loved the woman. However, he did not comfort his son. Instead, he turned his sadness to anger and took it out on Luciel. If only Luciel didn't try to intervene, then she would still be alive. It was his fault that his mother was dead. After that, Lucien only really smiled for the cameras. He was abused a lot at home, and soon enough, in order to make good connections, his father practically prostituted him. He gave him to business partners as an 'assistant.' It became known throughout the media that he had started taking antidepressants, and he was known as this whole sob story. 'Son of Max Valentine, fell into depression after the death of his beloved woman.' Some of the titles said. People who recognized him gave him looks of pity all the time. Soon enough, the male one shy, gentle, energetic kid became violent. Even as people slowly forgot about what happened to him and the media's interest shifted.


He pushed himself away from people, always seemingly angry, always willing to hurt someone. However, he was better at school, not as violent, willing to make friends if you just made the effort. School was his safe house after all, however that didn't last. He was moved to Japan when they expanded their company, lost connection with all his old friends. It seemed to him that his father's goal was to make him miserable. He spent a year there continuing his speech development classes. He had already known the language, having grown up learning it from a young age. His father's plan was always to expand the company all the way to Japan, so it was expected of Lucien to know the language just in case they had to move suddenly. After a year of that, he was sent into his third year of middle school, his first time at a Japanese school. He, naturally, befriended a group of delinquents. However, as time past and he got comfortable there; it happened.

He had finally felt safe in Japan and the year was nearing to it's end, when he was asked to stay after school by one of the teachers. In the classroom where he had considered his safe haven, something unexpected happen. His teacher had confessed his undying love for him. Lucien didn't really know what to say. When he tried to refuse, the teacher forced himself upon Lucien. In the walls of his safe haven, he was raped. The teacher was arrested when the media found out, however, it didn't matter, Lucien was absolutely traumatized already. His father sued the male, to seem good in the public eye, for rape and assault on a minor. And once again, Lucien was forced into the spotlight because of a tragedy. He didn't want it. He hated the look of pity people gave him, hate how people tried comforting him and telling him everything was alright, hated when people tried to force their fake sympathy upon him. As always, in less then a month, the media had forgotten the boy. And now, his father was forcing him to go here.