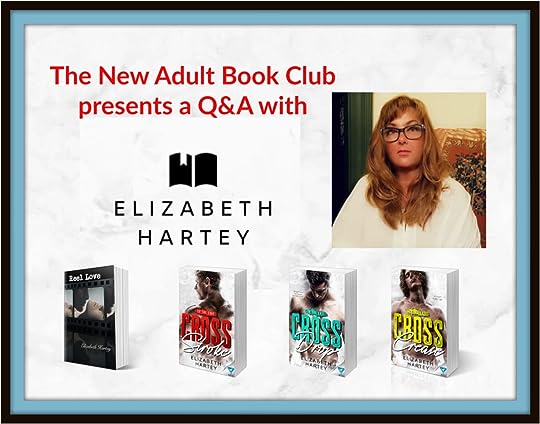 Taking a break from her busy schedule, Elizabeth Hartey joins us this week on the Q&A seat to answer any question you might have.

She is the author of books such as Cross Drop and Reel Love.

Leave your questions for her below.

What started your love of writing? Can you remember what book opened your heart to the written word? Do you have a favorite genre to read? To write? Is there a genre you are interested in writing but haven't ventured into yet?

Hello...
Do you use famous people when creating your characters? Who have you used?

What topic or genre would you like to write about/in that you have not?

Tashia wrote: "What started your love of writing? Can you remember what book opened your heart to the written word? Do you have a favorite genre to read? To write? Is there a genre you are interested in writing b..."
I loved to read even as a small child. when I old enough I would spend hours at the local library and my love of reading led me to want to write my own stories. I would write short story adventures with my dolls as the main characters getting into all kinds of adventures and harrowing situations they would need to escape. LOL. I wish I had some of those stories now. I had a favorite book when I was very young that was a collection of stories about elves and fairies. It opened up a world of imagination for me and I think it was the catalyst for me wanting to create my own worlds of make-believe. Now, romance is my favorite genre to read. Any kind really. i'm a sucker for a happy ending. i'm definitely interested in writing a YA fantasy. I have one started but it's still simmering inside my head.

Antonella wrote: "Hello...
Do you use famous people when creating your characters? Who have you used?"
I don't really use famous people per se. I do picture what my characters look like and then try to find pictures of anyone that looks like what I'm imagining to keep on my desktop as inspiration while I'm writing. They may or may not be famous. But the character always starts inside my head first and then I see if I can find someone real to match my thoughts. I like to try to match the person on my cover with the character in my book. So I've recently started picking my own models to be sure that happens. While writing dialogue I'll sometimes look at the photos to determine if I think that person would say or behave the way I'm writing them.

carrie thackston wrote: "What topic or genre would you like to write about/in that you have not?"
I would love to write more fantasy. My first novel was an adult women's fiction/romance fantasy and I loved writing it. There's definitely more fantasy books in my future.

Hi,
Are you working on another series? If so, can you give us an inside to it?

Which one of your books was your favorite to write?

Marie wrote: "Hi,
Are you working on another series? If so, can you give us an inside to it?"
I actually have one more book to write in this series. It's Dante Battaglia's story which will be out sometime in 2020. It begins back at Bernard University and will take us post graduation years when Batt is COO of the Summit Studios. After that I have a few standalone books which I've had on the back burner for some time and am anxious to get back to.

Katherine wrote: "Which one of your books was your favorite to write?"
Ooo that's a tough one. It's kind of like picking your favorite child. I have a special place in my heart for each one of the books in this series. I fall madly in love with the characters of each book as I'm writing it. Cross Stroke will always be special to me because Dak and Trace's story started the On the Edge series and the saga of the Bernard University bad boys. Their story flowed so easily as if it was just waiting to be written. Dalt and Nikki's story had all the feels and, I'm not ashamed to admit, had me crying at my desk a couple of times. Then there's Cross Crease, Wolfe and Heaven's story. It was a bit more difficult to write and took me longer than the other books. Wolfe's past was difficult to write about and a few readers were a teensy bit upset that I gave him such a sad childhood. But when I started writing about him, the one who had been the biggest goofball in the other books, I found myself having to show why his attitude was a compensation for what he had lived through. I didn't plan it, he just seemed to speak to me as I was writing, almost like he wrote his own story. In the end, he gave me the hardest time but I had to love him the most, because as Heaven will tell you, he was the most broken and needed more love than the other guys. LOL

Elizabeth wrote: "carrie thackston wrote: "What topic or genre would you like to write about/in that you have not?"
I would love to write more fantasy. My first novel was an adult women's fiction/romance fantasy and..."
P.S. I forgot to add that I would love the next one to be a young adult fantasy which I haven't tried yet

If you could spend the day with one of your characters, who would it be and who would you both do?

I think it would be Nikki. I love her strength and independence and how straightforward she is.
She's also a bit quirky and seems like she would be a hoot to hang out with. She's also a very loyal friend, always ready to have your back. And her family owns an Alpaca farm! How cool would it be to spend a day there?

I love young adult fantasy, well all fantasy really! That would be awesome!

Hi! I loved Heaven and Wolfe's story.
What are you currently working on?