Lets talk Clan powers. I think Magdalena is ok - she has the run of the mill superspeed and vague "know how to kill Things", nicely balanced by a timer and Exhaustion. I am ok with that.

I felt that Kais powers are a little over the top for being a first book. I already felt this when he healed Mags from (view spoiler)[ Lightning Sword to the Heart"... (hide spoiler)] , but now I know (from the blurb of book 2) that he himself is (view spoiler)[basically immortal.
That does take a lot of suspense out and will raise the question forthcoming "why does any character need to die?" ... (hide spoiler)]

His "secret" power is nice. I fully expect in book 2 we will find out that it is like the (view spoiler)[ Jedi Mind trick (hide spoiler)] and can be resisted, so I am not worried about that. By the way, does anybody else feel that it was extremely obvious from ist first use and Maggy was a) a bit oblivious and b) the author hander her the idiot ball. I mean, at least make a short dialogue like "What is your second clan power anyway" and have him lie convincingly. Because come on, wouldn't that be the very first question you ask anybody with powers you meet? Especially if you go with them into life and death situations?

How do you feel about the Clan powers?

I agree. Having read the sequel, I can confidently state that you don’t have to, as you’ve already got it figured out.

Again, this is very much like X-Men, although I suspect Roanhorse is using “clan power” as a metaphor for being a child of two cultures, as she is both black and Native American. That’s something we’ve seen in novels before, just not with the American Indian slant.

(So much so that I shamelessly riffed on the concept and based one of my superhero RPG character’s primary and secondary powersets on my Italian and Irish heritage.)

Yeah, I thought his second clan power was pretty obvious from the beginning. If I were Maggie, I feel like I would have pushed him harder on that; then again, I guess he could have been low-key using it on her to dissuade questions.

Molly wrote: "Yeah, I thought his second clan power was pretty obvious from the beginning. If I were Maggie, I feel like I would have pushed him harder on that; then again, I guess he could have been low-key usi..."

Yes! This was so obvious from the outset that the idea of it being a “reveal” at the end was just... but surely we all knew that all along?.??

Part of what is shown, but perhaps not enough, is that Maggie is about 20 years old, and traumatized by the death of her grandmother and then abandonment by her mentor. She makes bad decisions regularly. She even knows this intellectually but can't get past it. In that sense her blind spots are plausible. I just find it insufficiently established given her significant fighting prowess.

I'm glad I'm not the only one who thought the "reveal" of Kai's second clan power was underwhelming. When Mags finally asked him about it I was just rolling my eyes. Duh! It seemed obvious to everyone BUT Mags.

This discussion has made me suddenly flash on this: 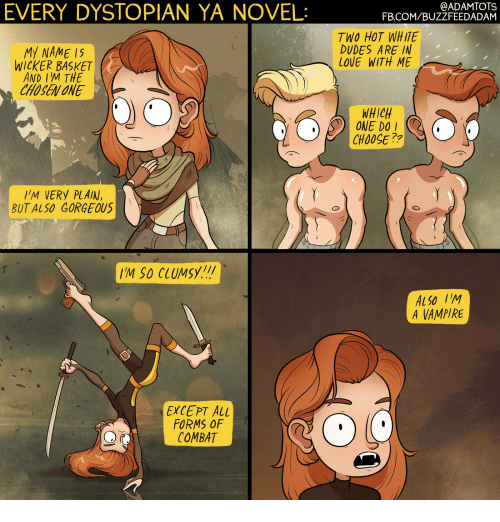 John (Taloni) wrote: "This discussion has made me suddenly flash on this:

Oh thank goodness for this discussion. I'm new here, and I was sort of scared that everyone else would love the book and that I was the only one feeling cranky about it. The most cranky-inducing moment was when one of the warriors guys suddenly turns out to be gay and gives Mags a fabulous makeover. Because every girl needs a gay friend makeover in YA land.

Janet wrote: "Oh thank goodness for this discussion. I'm new here, and I was sort of scared that everyone else would love the book and that I was the only one feeling cranky about it...."

Nah, I thought the book and sequel was great with an excellent main character.

Now I'm the one all alone in the corner.

(though just listened to the podcast and Tom seems pretty much on my side).

Still some months it's the other way around. I actually love the fact that whenever I'm in the minority I get to read the other point of view - it makes reading the books more fun for me.

Janet wrote: "Oh thank goodness for this discussion. I'm new here, and I was sort of scared that everyone else would love the book and that I was the only one feeling cranky about it. The most cranky-inducing mo..."

Hah. I got halfway through (maybe slightly more) and gave up. I wasn't engaging with the book, it wasn't drawing me in. I didn't want to read it and as such, didn't want to read. I'm glad others enjoyed this book but it clearly wasn't for me. I'm bummed, because after the interview, I thought I'd like it.

William wrote: "Janet wrote: "Nah, I thought the book and sequel was great with an excellent main character.

Now I'm the one all alone in the corner."

Nah, it's okay, I loved it too, and immediately preordered the sequel (it's out in November in the UK). It was a fun ride and I loved Mags and Kai.

That said, it's not without it's flaws (far from it) and I agree that the reveal was strange. My reaction was 'um, wait, we know this; it ain't news - he told us this already'. Ah well.