The Readers Review: Literature from 1714 to 1910 discussion

Mod
I apologize that I was away and lost track of the date! Please go ahead and add comments on this second section of the book.

Hope your trip was relaxing
AS has already been posted. The Ladies'Paradise was the result of Zola's 5 year study of the Mason Du Bon Marche. In fact it has been mentioned by name in the books
image: 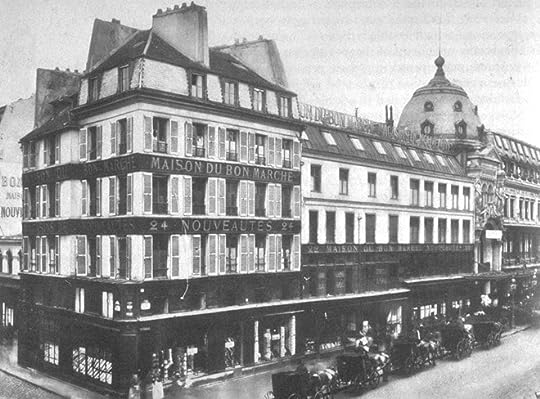 We also hear a lot about mantles. This one is from around 1890
mage: 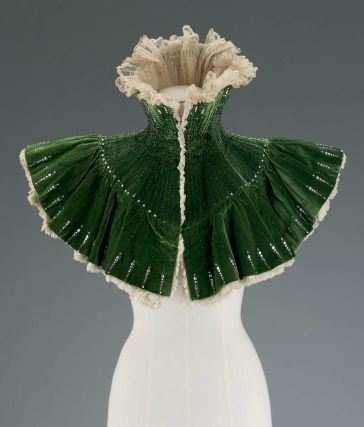 this may be more properly a capelet, but a mantle is along similar idea, a shoulder wrap, designed to be easy to fit any woman.

Lace also seems to be very important. Maybe it is more than we think about..
From 1930
image: 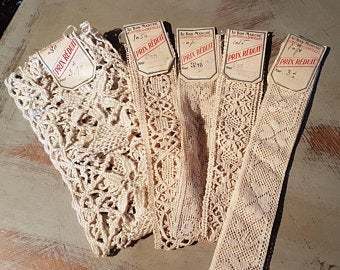 Any clue as to what the store owner sees in this mouse of a girl from the country?

Are we supposed to notice that the Department store is almost like American Company towns?
Is it me or are there hints of these shop girls getting Middle Class notions about themselves.
I think that over all Zola has a low opinion of middle class values. Is this clear so far in this book?

This is Wiki at lenght on the French term for Middle Class:
Bourgeoisie (/ˌbʊərʒ.wɑːˈziː/; French: [buʁʒwazi]) is a polysemous French term that can mean:

a sociologically defined class , especially in contemporary times, referring to people with a certain cultural and financial capital belonging to the middle or upper middle class: the upper (haute), middle (moyenne), and petty (petite) bourgeoisie (which are collectively designated "the bourgeoisie"); an affluent and often opulent stratum of the middle class who stand opposite the proletariat class.[1]
originally and generally, "those who live in the borough", that is to say, the people of the city (including merchants and craftsmen), as opposed to those of rural areas; in this sense, the bourgeoisie began to grow in Europe from the 11th century and particularly during the Renaissance of the 12th century (i.e., the onset of the High Middle Ages), with the first developments of rural exodus and urbanization.
a legally defined class of the Middle Ages to the end of the Ancien Régime (Old Regime) in France, that of inhabitants having the rights of citizenship and political rights in a city (comparable to the German term Bürgertum and Bürger; see also "Burgher").

The "bourgeoisie" in its original sense is intimately linked to the existence of cities recognized as such by their urban charters (e.g. municipal charter, town privileges, German town law), so there was no bourgeoisie "outside the walls of the city" beyond which the people were "peasants" submitted to the stately courts and manorialism (except for the traveling "fair bourgeoisie" living outside urban territories, who retained their city rights and domicile).

The previous book in this sequence had made it clear that Zola felt the French bourgeoisie were not a people to be emulated. Is this disdain at all clear in his depiction of the shop girls and thier nascent pretensions?

Mod
It's understandable that the shop girls want to live like other people on their one day off, going to a park, restaurant, theater, etc. Very few just save their money as Denise does (but they don't have dependents.) I'm very annoyed at the older brother and think she should stop giving him money and let him take any consequences.

Robin wrote: "It's understandable that the shop girls want to live like other people on their one day off, going to a park, restaurant, theater, etc. Very few just save their money as Denise does (but they don't..."

Robin, I was gonna comment, but as happens, you have said it well and in a lot fewer worlds.

I am not all in with Zola and the middle class. Being poor as many of the shop girls were/are, aping their 'betters' is perhaps no worse than indicating that their goal is to stop living like a poor person. (taking a mo to look at all the unnessarry crap in my place)

Mod
It's a bit like the comments today on how the working poor, or millennials, or some other group, should budget better in order to get ahead. However, there are often systemic factors working against them (for instance, not being able to open a bank account so having to pay fees to cash or write checks, or only being able to get a contractor job without security or benefits.)

Also, for the working poor, spending the money they have may be a logical choice. In their world, if they have money lying around, it is likely to be stolen, or wheedled by relatives, as happens to Denise. Many middle-class and rich people are impulsive and self-indulgent but they have cash or credit to cover it.

Some of the customers of the Paradise are buying way more than they need. Though it's true they used to change clothes multiple times a day, so I guess they get to show everything off at least once. But this seems not to match with the desire to save a few francs on a bit cheaper deal.

The price war is fascinating, as it is the same thing that happens today. The vendors and employees lose out, as their commissions are reduced or there is less money to pay them. The competitor was brilliant to start buying his material from the Paradise at the lower cost, even though the customer insisted his wasn't as good. There is a bias for name brands even when the product is the same. (For instance a supermarket's brands may be made by one of the national companies and contain the same quality items, but some people will only buy the national name brand.)

While I said I would only audit, I adjusted my reading schedule to read this. I am very glad I did as I am enjoying this book very much, more than I did Germinal. It may be that I enjoy this translator more (Brian Nelson here while Peter Collier did Germinal) as I find the writing smoother.
It may be that the subject matter here is just more appealing to me than in Germinal. As a labor relations professional, the subject matter of Germinal attracted me, but maybe it felt more like a work read. Germinal did feel like an important book, though, and I did like it.
However, the advent of the department store versus the specialized shops is an attractive story and, as mentioned by a previous poster, is very relevant to today. My thoughts went to the popular movie You've Got Mail.
While I hadn't noticed Zola's disdain for the middle class, I will look for it now.
I too feel like strangling Denise's little brother Jean. I know he is young and naive, but if he's old enough to be pursuing affairs with married women he's old enough to bear the full cost and responsibility of them. When he figured out he was a burden, he did engage in some self-castigation, but he continued being a leech. He can't self-castigate himself enough for my taste.

Mod
Although there are serious issues here, it's not the same existential struggle as Germinal. We are told the Paradise employs 1000 people, and although other businesses are closing, there must be related jobs, such as delivering all those packages. The mom and pop stores just had their own family do all that. It's interesting that Denise favors the large stores and seems to have a sophisticated understanding of the industry. In the TV show Mr. Selfridge, the heroine didn't want to marry the boss, she wanted to be the boss.

The heroine on Mr. Selfridge was named Agnes Towler, and her story was a co-lead story with the one about Selfridge himself. Now that I'm reading this novel, I wonder if the writer Andrew Davies added the Agnes character because of Denise's character in the Ladies Paradise novel. While the show was based on actual events and people, I'm presuming some characters such as Agnes were creative inventions.
Adding the Agnes character gave the show an Upstairs/Downstairs feel like Downton also had, with plots of both the owner/wealthy class and the worker class. It has been an effective plot devise for such shows.

Mod
Bad enough, I was getting our books Wyllard's Weird and The Claverings mixed up because of their similar time period and story arcs, but when a character in the first book went to Paris and bought clothes at the Bon Marche department store, I thought of it as The Paradise and thought I was back in this book!

Brian wrote: "While I said I would only audit, I adjusted my reading schedule to read this. I am very glad I did as I am enjoying this book very much, more than I did Germinal. It may be that I enjoy this transl..."

I agree. I hated all the problems he brought to poor Denise.

Someone familiar with diseases could try to answer my doubt? What disease could explain that thirsty that Denise's cousin (I forget her name) is feeling? maybe the weight loss could be explained by a disease, not just the sadness that she is feeling?

Mod
Although Zola is a realistic novelist, I think her problem is the romantic disease of unrequited love and despair. (Maybe we would call it depression.)I think she is isn't eating and drinking. No one really cares and the father ends up causing more delay.

Robin wrote: "Although Zola is a realistic novelist, I think her problem is the romantic disease unrequited love and despair. (Maybe we would call it depression.)I think she is isn't eating and drinking. No one ..."

I m going with Robin on this.
Zola may be hinting at something medical, but if so he is being vague.

Robin wrote: "Although Zola is a realistic novelist, I think her problem is the romantic disease unrequited love and despair. (Maybe we would call it depression.)I think she is isn't eating and drinking. No one ..."

Phrodrick wrote: "Robin wrote: "Although Zola is a realistic novelist, I think her problem is the romantic disease unrequited love and despair. (Maybe we would call it depression.)I think she is isn't eating and dri..."

There was a term to depression at that times? Maybe the vagueness could be explained by the lack of comprehension of it.

Mod
Rafael wrote: "Phrodrick wrote: "Robin wrote: "Although Zola is a realistic novelist, I think her problem is the romantic disease unrequited love and despair. (Maybe we would call it depression.)I think she is is..."

You're right, depression wasn't diagnosed like today. It seems to me anyone would be depressed in her situation. Her father's business is dying because of competition from new models, the man she loved for years doesn't care about her, indeed loves someone else, and she has no other opportunities for work or marriage. Plus their home/business is dark, smelly and cramped.