I'm offering a few copies of my new novella in exchange for honest reviews. While the book is a prequel to my cosmic horror SPECTRA Files trilogy, it also works as a stand alone and is the perfect place to start the series.

Available: 3 paperbacks (US only) and 10 ebooks (MOBI, EPUB, or PDF). Paperbacks may take a week to ship as this is my first indie release and amazon is notoriously slow with author copies. First come, first served.

Thanks for your consideration! Here's some more info about the book: 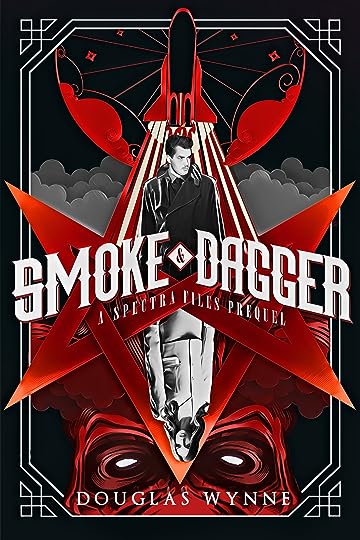 Catherine Littlefield was raised in a seaside New England town haunted by whispers of arcane lore that remained tantalizingly out of reach to a daughter of well-to-do Baptists. But when her studies at Barnard College in New York lead to an encounter with a secret society, she is offered access to the knowledge she has always sought…if she can pass a test.

Dispatched to California to infiltrate the occult world of a rival magician—a pioneering rocket scientist with ties to the apocalyptic Starry Wisdom Church—Catherine soon discovers that she’s not the only one spying on Jack Parsons. A fledgling government agency devoted to the investigation of weird science in the aftermath of World War II has assigned a pair of hard-nosed agents to gather information on her target, whose experiments with sex magic and eldritch artifacts are approaching a cosmic crescendo.

Drawn into the volatile chemistry of Jack’s inner circle and tempted with knowledge and power, Catherine must determine what’s at stake for a world threatened by dark forces and decide where her true loyalties lie.

"Wynne weaves a spell that will take you back in time, slip you into alternate universes, and drench you in a hot, smoky world filled with tantric sex, mad scientists, mysterious cults, secret government agencies and characters that leap off the page to pull you in. Don’t miss this ride."
-Philip Fracassi, author of Behold the Void

"Wynne skillfully blends ancient myth, modern events, and Lovecraftian ideas into a fast-paced narrative about the places where history official and history secret collide."
-John Langan, author of Sefira and Other Betrayals

I'd love to check this one out, please. Looks awesome.

Thanks, Bandit! What's your preferred format?

Paper. If paper isn't an option, then Mobi. for Kindle.

Mod
I enjoyed the heck out of this! Hope you do too, Bandit!