20 views
Restoration of Christian Culture > 7. Along the way

Mod
Use this thread for comments as you read or that don't fit anywhere else.

What do other readers think of his assertion that women's place is in the home doing their "proper work, participating with God in the creation and nurture of human life, which cannot be done by men"? Even though we chose for me to be home full-time with our children (then parents) and lived well on one modest salary, I think many models work, including having dad as primary caregiver, working from home, co-working... And of course this leaves out women single, whether by choice, vocation, accident or misfortune.

I think the Scriptural directive to "pray always" is for all of us, not just for cloistered religious! The Holy Spirit can be praying in and with us no matter what we're doing.

random question: What essential event does he think St. Joseph "slept through" (chapter 5)? The nativity? I'd rather picture him heating the water and catching the baby!

He has a strong view of the role of the teacher. What about the "community of learners," with the teacher as guide but also open to learning from his students? What did those of you who are teachers think of his treatment of education?

I don't think he makes a very convincing case for the centrality of Mary in all worship and culture.

Jill asks "What about the 'community of learners....'"

In my 20 plus years teaching high school, I think that dynamic is the ideal--I learned more from teaching a novel than simply reading it, for sure, especially when I taught it for several years. There were several fine classic novels in our curriculum to choose from. I found the most inspiring classes came about when I picked several novels, gave a brief summary and let them choose individually. That allowed me to put the students reading the same novel into discussion groups, and they were assigned a presentation (most chose to do very imaginative videos) to make the book appeal to the rest of the class. We did the same thing with poetry, and definitely minimized the reluctant readers! To avoid one person in the group doing all the work, we had assigned roles within the group. I haven't read all of Senior yet, but I definitely agree with the community of learners!

Mod
Jill wrote: "What do other readers think of his assertion that women's place is in the home doing their "proper work, participating with God in the creation and nurture of human life, which cannot be done by me..."

I think he is partly right (women do have a unique role in giving birth and nurturing their children), but it's difficult to make general assertions about this. As you say, today there are many other possibilities.

Jill wrote: "I think the Scriptural directive to "pray always" is for all of us, not just for cloistered religious! The Holy Spirit can be praying in and with us no matter what we're doing."

Jill wrote: "What essential event does he think St. Joseph "slept through" (chapter 5)?"

I haven't the faintest idea. I'd say he means when Joseph dreamed that he should accept Mary and father her baby, as though that had happened at the same time as the Incarnation, but it didn't! Mary's pregnancy was already visible when that happened.

Anyway it's difficult to say which was "the second greatest event in the history of the universe." Which was the first? I'd say the Incarnation. But then the second would have been the Crucifixion plus Resurrection, wouldn't it? And Joseph wasn't there. Or perhaps he puts the Resurrection in the first place and the Incarnation in the second. In any case I don't think he means the Nativity, which is (in my opinion) secondary to the other two.

Jill wrote: "What did those of you who are teachers think of his treatment of education?"

I agree with Madeleine. Let's take into account that Senior was a successful learner. However, I don't like his dictum that "Gymnastics, music... and science follow in that order and cannot be skipped, reversed or mixed." As a boy, gymnastics was my bogey subject. I think some boys are more adapted to this subject, and some are not at all. In my opinion gymnastics should be an optional subject. Or reduce it to the minimum so that everybody can do it, not try to make of every child an Olympic champion, as teachers of gymnastics frequently do!

In this case, he goes even further back than the nineteenth century! Gymnastics, music and science (philosophy) were the three subjects proposed by Plato in The Republic!

Mod
In chapter 3, Senior writes about prayer: The third degree is for those in the married state... [who pray] two and one-half hours per day...

There are two ways to understand this. If he means, as Jill suggested, that we can pray every moment of our lives (which is correct), for even sleeping or working we can be praying if we always put God in the center, then it seems too little. That way we'd be praying 24 hours a day.

If he means that we must stop what we are doing, to say vocal or mental prayers, two and a half hours every day, I think that's too much.

In his biography of Don Juan de Austria, the victor of the battle of Lepanto (Jeromín), Father Coloma (a priest) says in wonder that Don Juan prayed for one hour every day of his life. That's 2.5 times less than what Senior is asking from everybody, and Don Juan was an exceptional person.

In her biography of her father (Fighting Angel) Pearl S. Buck mentions that her father (who was a protestant missionary) prayed every morning for one hour. According to Senior, he should have been praying for four hours, as he belonged to the second degree.

Therefore I think Senior is not realistic with respect to the time we should dedicate to vocal or mental prayers.

“Jesus is true man; he is truly a part of the earth, truly a moment in the biological evolution of this world, a moment of human natural history, for he is born of woman. . . In the Catholic Church it is freely permitted to see the Incarnation first of all, in God’s primary intention, as the summit and height of the divine plan of creation . . . the statement of God’s Incarnation — of his becoming material — is the most basic statement of Christianity. . .”
(Karl Rahner, S.J., Theological Investigations, Volume V., Dayton, Longman & Todd, L.T.D., pages 185, 176-177.)

By Gymnastics, he doesn't mean what we studied (and I too hated, not being physically coordinated), "phys ed," exercise, sports, etc. I can't find his or the classical definition, but I think he means things like walking, careful observation of nature, immersion in the actual world.

Mod
Jill wrote: "By Gymnastics, he doesn't mean what we studied (and I too hated, not being physically coordinated), "phys ed," exercise, sports, etc. I can't find his or the classical definition..."

For the Greek, gymnastike means "what you do when you are naked" (gymnos = naked). It was practically equivalent to what we call athletics: https://commons.wikimedia.org/wiki/Fi....

I can see that Senior uses the term in a broader sense.

Jill wrote: "I don't think he makes a very convincing case for the centrality of Mary in all worship and culture."

For someone growing up in a Catholic country, there's not much need to make the case, it's very obvious: Most of the old-time harvest feasts have our Lady (under different invocations) as their patroness; work used to stop at noon for a couple of minutes to pray the Angelus; in times of disaster or at funerals, the Rosary was the prayer people turned to; and even small towns of under 5000 people would get their resources together to build a church like this one to honor their Virgin: 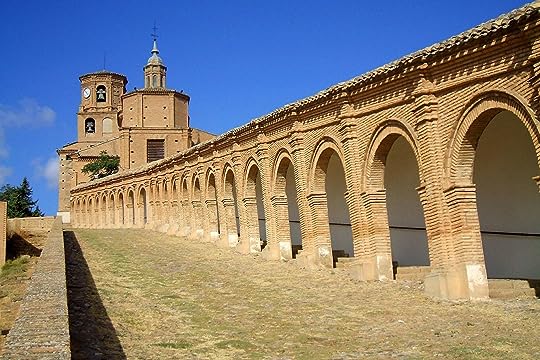 I remember we prayed the Angelus at noon in my high school. We live 1/2 mile from our parish church and their bells ring it. When I can hear it, I can still pray most of it along from memory, but forget otherwise.

Mod
Manuel wrote: "Jill wrote: "What do other readers think of his assertion that women's place is in the home doing their "proper work, participating with God in the creation and nurture of human life, which cannot ..."

Re second greatest - this is one of my problems with Senior, he makes an assertion like this and simply expects he will be understood, or doesn’t care if you don’t understand him. The only way I can make sense of the reference is that Creation was the greatest, and the Incarnation was 2nd, but as you note, there is no information that Joseph was sleeping at the time, and it seems likely he wasn’t. This fits a pattern of strongly asserted views that seem idiosyncratic at best if not a bubble off plumb.

John wrote: "Manuel wrote: "Jill wrote: "What do other readers think of his assertion that women's place is in the home doing their "proper work, participating with God in the creation and nurture of human life..."

I agree. We have a bit of a stumbling block here. Senior could have explained himself better. Generally speaking, when one thinks of the complimentarity of the the sexes, then a natural division of labor ensues. However, this is different for each couple depending on each person's physical natures and intellectual aptitudes. Now women bear children and tend to naturally be more nurturing, so for woman to stay home with the children while they are growing up seems logical. However, there are a few particulars he doesn't address.

One, families for most of history haven't lived in isolation from the rest of their families as we do today, what we call the nuclear family. You had multiple generations under one roof, and it was often the grandparents or older siblings that tended to the (younger) children while the able-bodied adults worked in the fields or whatever their occupation was.

Second, throughout history women have always contributed to the family finances. The instances where women in large numbers (excluding the wealthy) didn't are actually very rare. The industrial revolution which geographically separated the home from the workplace wasn't good for families and introduced all sorts of problems.

Third, the ideologies coming out of the French Revolution, collectivism, feminism, etc. further tore at the natural family fabric and dynamic.

This is what I came up with on the spur of the moment. Since we could talk for a while on each one of these points, we see that the situation is rather complex and always was. There are unique stress factors to each that aren't negligible.

Yale is now offering a freshman seminar titled "Six Pretty Good Books," a clear dig at "Great Books of the Western Tradition." Four have an Eastern origin (Chinese, Middle Eastern, etc.), plus "The Tempest" and Frankenstein.
Senior would turn over in his grave!