Mod
This month's featured author is Tove Jansson from Finland.

Mod
Rosemarie, do you have a list of the Classics for this Author that you might be suggesting?

Or does anyone have a referral?

Mod
Tove Jansson is famous for her series of books about the Moomins. The first book in the series is The Moomins and the Great Flood, followed by Comet in Moominland, which I will be reading since the library had a copy of that one.
Other books in the series are:
Finn Family Moomintroll
Moominpappa's Memoirs
Moominsummer Madness
Moominland Midwinter
Tales from Moominvalley
Moominpappa at Sea
Moominvalley in November

Lesle wrote: "Rosemarie, do you have a list of the Classics for this Author that you might be suggesting?

Or does anyone have a referral?"

She is most well known for the Mumin books

Not sure if this is the entire series and there are also Mumin graphic novels.

Mod
Tove Jansson was born in 1914 and grew up in Helsinki. As a young woman she studied art and design in Sweden, Finland and France, and made Finland her home.
In the 1940s she worked as an illustrator and cartoonist for various Finnish magazines. She created a cartoon figure called Snork, an early version of the Moomins,
Her first book was published in 1944, but was not a success.
However, her next two books were very successful and were soon translated into many languages.
Tove Jansson died in 2001, after winning many honours for her achievements as artist and author.

Mod
Thanks, Manybooks. We were posting at the same time! 😄

I really like the cover and it seems like a fun read.
She did comic strips too.

Rosemarie wrote: "Thanks, Manybooks. We were posting at the same time! 😄"

I want to try to complete the Moomin series and perhaps also try The Summer Book.

Mod
Our library system finally has a copy of The Summer Book. But I am starting with the Moomins.

Rosemarie wrote: "Our library system finally has a copy of The Summer Book. But I am starting with the Moomins."

I'll be starting with Comet in Moominland also since my library has that one available.

Tove is one of my all time favourites!

I am hoping that reading the remaining Moomin books in English translation will be enjoyable. I read both Comet in Moominland and Finn Family Moomintroll in German translation as a child and absolutely loved them to pieces. But when I read both books a couple of years ago in English, I did not all that much like the writing style of the translation and so I am hoping that things might have imporoved and that the remaining Moomin books will feature a translated writing style more to my tastes (as I also do not have a way to get them in German at present and that the more recent ttranslations, not the ones I read as a child, have faced quite a bit of criticism ).

As well as the Summer Book there is also a Winter Book (note clever marketing). This contains a delightful found story based on letters from a Japanese fan.

These are books written for adults, but some stories are written from a child viewpoint, and have the same insight into the child mind as the moomin books.

Manybooks wrote: "I want to try to complete the Moomin series and perhaps also try The Summer Book."

I read The Summer Book recently and can recommend it.

I love the Moomin books but I am going to be reading Sculptor's Daughter: A Childhood Memoir

Tracey the Bookworm wrote: "I love the Moomin books but I am going to be reading Sculptor's Daughter: A Childhood Memoir

I have this on my kindle but in German.

The moomins are very cute, but the son is called Moomintroll. But trolls are nasty creatures, not cute at all. It seems that the moomins evolved from her drawings of characters which were black bodied, red eyed and skinny, with horns and pointed noses. An excellent makeover!

Bernard wrote: "The moomins are very cute, but the son is called Moomintroll. But trolls are nasty creatures, not cute at all. It seems that the moomins evolved from her drawings of characters which were black bod..."

I think part of the problem is that we have been perhaps too influenced by Tolkien's trolls, as some of the trolls of Scandinavia are actually considered more diminutive and gnome like creatures that like British Brownies tend to be helpful if one feeds them.

I have already read ALL the books by Tove Jansson
and am a huge Moomin fan :)

I have a lot of Moomin paraphernalia, including my own special cup 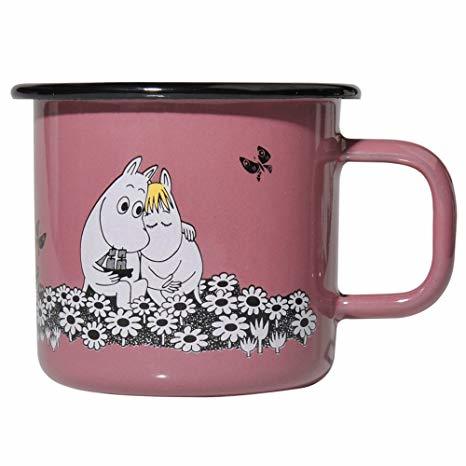 and a set of saucepans. 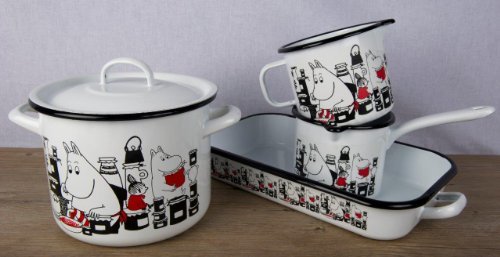 One day I hope to go to Finland and find her little island.

Mod
Those are adorable, Jazzy!

Rosemarie wrote: "Those are adorable, Jazzy!"

Thank you! I had a really cute Moomintroll tag on my luggage too! 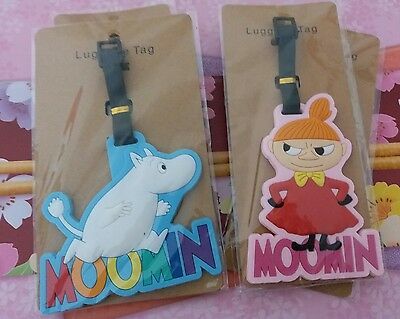 The same luggage that was stolen in Hungary... c'est la vie!

Manybooks, I am not greatly disturbed by the troll origins of the moomins, but I am glad they are cute.

Jazzy wrote: "I have already read ALL the books by Tove Jansson
and am a huge Moomin fan :)

I have a lot of Moomin paraphernalia, including my own special cup

I have a question, who is your favourite Moomin book character?

They are all quite wonderful and quirky but my favourite is Snufkin. His love of peace, solitude and the great outdoors speaks to my inner child. As a child I loved wandering alone contemplating nature and the wonders there. But for the past 20 years I have been more like Moomin Mama tending to my family and other people. But as I age I think I feel Snufkin calling to me.,

An indicator of good children’s literature is whether the characters are ones that you can relate to in yourself and others around you. A A Milne’s Pooh characters fit this bill also.

If you want to find books by Tove Jansson
follow the link!

They are all such good characters, but I do feel sorry for the Groke.

Jazzy wrote: "If you want to find books by Tove Jansson
follow the link!"

I remember that at age 10 I was puzzled that the original title did not look Finnish. But at that tender age my knowledge of Finnish history was quite limited.

I have read The Summer Book and Fair Play and Ioved them both. I have all the Moomin books, and would love to read them with the group! I also want to read the rest of the books she wrote for adults, but that will have to wait for another time when I can afford them.

Mod
I have just finished Comet in Moominland. It's a cute story, reminiscent of The House at Pooh Corner. I can see why the books are popular.

I was lucky to get the Summer and Winter books in charity shops, for a pound each!

Tracey the Bookworm wrote: "I have a question, who is your favourite Moomin book character?

They are all quite wonderful and quirky but my favourite is Snufkin. His love of peace, solitude and the great outdoors speaks to my..."

Mod
That is lucky, Bernard.

When I got my books I got them all from Charity shops, amazon or ebay. I've got a lovely cookbook too.

My favourite character is Moomintroll.
However Snorkmaiden is annoying and sometimes I wonder what he sees in her. :)

Re: However Snorkmaiden is annoying and sometimes I wonder what he sees in her .... I agree, but perhaps Tove is teaching us that loveliness is in the eye of the beholder.

I read The Moomins and the Great Flood and Comet in Moominland last night. They really are adorable stories. I have a few "heavy" reads on my September schedule, and I think I'll read the rest of the Moomin series in between those books to help lighten the mood.

So far, my favorite characters are Moomintroll and Sniff. I also really like Moominmamma and her incredible purse, and the Muskrat kind of reminds me of Eeyore from the Pooh books.

Interesting point Jazzy and Bernard about snorkmaiden. Tove herself was a woman who seemed less interested in her outward appearance as the inner life and with your comments l see that reflected in snorkmaiden.

I am reading Sculptor's Daughter and right at the beginning she is at her grandfathers house with another granddaughter called Karin, and Karin has ‘hair that curled naturally and very big eyes.’ And later on she says, ‘She was more beautiful than ever and I hated her.’ Could Karin be the origin of snorkmaiden?

What I think is lovely about the Moomin characters is that I think we all know someone who is at least a little like each of them. And even with our choosing of our favourite characters we are revealing a lot about our own. This is one of the reasons I feel group reading is such a healthy experience, helping us to understand ourselves and where we fit into the whole.

Re: She was more beautiful than ever and I hated her.’ Could Karin be the origin of snorkmaiden?
It is certainly plausible. Hate can be as powerful an emotion as love.

Snorkmaiden does come across as somewhat of an air head and I could see Tove being able to get back at a cousin who was pretty and loved by casting her as the character.
I wonder who Little My represented? Tove herself?

I would like to think that Tove was not as malevolent as My. But maybe she acted out her bad traits through My.

No I don’t think she was as malevolent in real life but, based on what I am reading she believed in the sinfulness of human nature and within herself. Little My would be a perfect outlet. I think Tove was someone who was very self aware, even unforgivingly so. I have read before that authors exorcise their inner demons in their works.

I don't think Tove was ever as spiteful as Little My. I loved all her works, and her enduring friendship with her lady lover that she didn't have the freedom to be as open about in her writing as she may have wished (at least in her earlier works). In the Sculptor's daughter, I was most taken with her father's pet monkey Poppolino, upon which was showered all the affection her father couldn't show his children, and perhaps Tove's jealousy was her inspiration for Little My. 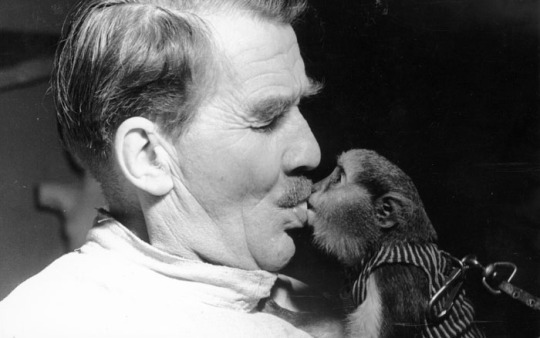 and of course you should look at this.
https://www.moomin.com/en/

They are not my favourite characters, but the Hattifatteners are certainly intriguing. They are always in large groups, and always on the move. Their faces only have eyes, which do not betray any emotions.
During a thunderstorm they become electrically charged, and produce crackling noises. And they worship a barometer!

They do not seem to be malevolent towards the moomins, but I find their alien nature disturbing. Truly a curious species.