note: This topic has been closed to new comments.
141 views
Feeling Nostalgic? The archives > Weird Things People Do To Money

Check out this slideshow...

Anybody get any money with weird messages on it? Heh...I want to make a TC dollar now...

I love the KISS one.

I once got a dollar bill that was clearly torn up into pieces and then taped back together. WTF. I wasn't sure if I could use it, but the convenient store clerk took it.

When I was twelve a friend of my parents gave me five ten dollar bills, all painstakingly origamied. It presented a problem, since clearly they were meant to be used, but they were too pretty to use. I kept them for two years, until I unfolded them as part of the payment for my second electric guitar.

That was the monumental day of my first and second solo subway rides to Brooklyn, and the day I learned the life lesson Music Stores Don't Take Checks (hence the unfolding of the beautiful origami bills).

I have had horrible luck trying to get places to take even ratty bills with no tape on them. It was REALLY bad in India, even if a little corner had been bent to the point it almost tore; they refused to take it. The US seems to be better about it, and sometimes banks will exchange your bills if you take them in in person.

I almost became a korean geisha girl once.
But it didn't work out.
Possibly because I am not Korean.

*edit* oops, I read the title of this thread as weird things people do to make money.
Huh.

I'm now smiling as I imagine a geisha girl wearing a fake mustache.

Yeah, the mustache could have been part of the problem too.
No wonder that old korean man didn't want to buy me a car.

I thought Geisha were Japanese? Or am I being too Asian Specific?

Damn! one of those days already. lol

Stephen wrote: "I thought Geisha were Japanese? Or am I being too Asian Specific?"

I was thinking the same thing, Stephen.

Oh no Stephen, there was no stearnest to what I was saying, it was just a flip statement.

Whew! However, I do like Korean food. And Koreans.

http://news.yahoo.com/s/nm/20090910/t... I think this might fall under the rubric of stupid things people do with money.

Technically, they are Japanese. But if there is a similar thing for Koreans, I don't know the term. So I just say Korean Geisha.

Mod
Several times I've gotten bills with the "Where's George" stamp. When I do, I always enter them into the website.

Clark, how much you wanna bet someone's tried to pay for a meal at Burger King with that currency...and got away with it?

Isn't it some kind of federal offense to deface money? Or, is that just photocopying it? :)

Gus wrote: "Clark, how much you wanna bet someone's tried to pay for a meal at Burger King with that currency...and got away with it?"

Even after one of the employees marked it with one of those pens to see if it's counterfeit.

The guy who taught me to make a bill into a bowtie told me that he made one once and taped it to his shirt so that he could get into a fancy restaurant. Probably not true.

Another weird thing people do with money: spray it with oven cleaner.

Counterfeiters do this to $1 bills in order to remove all of the ink so they can then reuse the paper to print fake $100 bills. This is apparently the easiest way to get access to the special paper that the government uses for currency, which has colored filaments running through it and reacts chemically to those fake-detector pens that Clark mentioned.

There's a very interesting book on the history of counterfeiting in America called A Nation of Counterfeiters: Capitalists, Con Men, and the Making of the United States. Worth a read.

Here is the note from my dictionary. 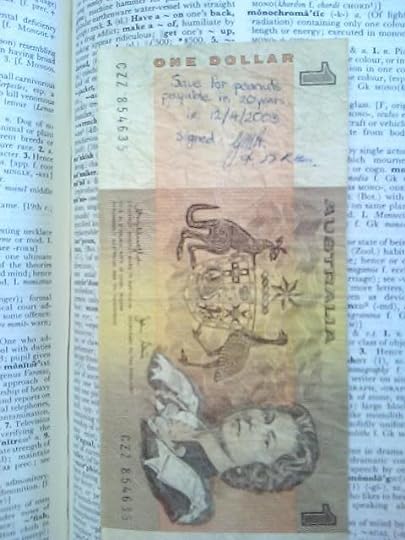 Note: it is filed under 'M' for money.

Polymer series, The first polymer banknotes were issued in 1988 by the Reserve Bank of Australia, specifically polypropylene polymer banknotes (produced by Note Printing Australia), to commemorate the bicentenary of European settlement in Australia. All Australian notes are now made of polymer.

They asked at the Australian Federal Reserve if they wanted paper or plastic Larry.

Polymers -- one day we will be buried in polymers that never degrade.

Good one, Jim. I can always count on you.

I suppose their money lasts longer?

Never heard of it.

I will happily take any "dirty" money off your hands that you don't want.

(What can I say, I'm just selfless like that.)

I suppose it would be OK if we mailed it to you?

I keep reading the thread title as "Weird Things People Do To Monday."

Mod
Finally, I see a fresh dollar bill signed by Timothy Geithner. In 2011! He's been treasury secretary since 2009!

A Nation of Counterfeiters: Capitalists, Con Men, and the Making of the United States (other topics)