Mod
"Where there is water, there is a weeping woman."

This is one version of the Llorona (pronounced: yo-ro-nah) that I heard from my parents when I was old enough to have my own room but young enough to scream for mom when the wind shook the house and howled through the window frame cracks. "She's coming to get you!" my dad would say in his spookiest voice, and then start laughing at us. Then mom would guide us (all crying and shaking and rubbing our eyes) to her bedroom and dad would sleep on the floral orange couch.

I'm curious to hear the ghost stories you all grew up with.

This is a story that the old ones have been telling to children for hundreds of years. It is a sad tale, but it lives strong in the memories of the people, and there are many who swear that it is true.

Long years ago in a humble little village there lived a fine looking girl named Maria Some say she was the most beautiful girl in the world! And because she was so beautiful, Maria thought she was better than everyone else.

As Maria grew older, her beauty increased. And her pride in her beauty grew too. When she was a young woman, she would not even look at the young men from her village. They weren't good enough for her! "When I marry," Maria would say, "I will marry the most handsome man in the world."

And then one day, into Maria's village rode a man who seemed to be just the one she had been talking about. He was a dashing young ranchero, the son of a wealthy rancher from the southern plains. He could ride like a Comanche! In fact, if he owned a horse, and it grew tame, he would give it away and go rope a wild horse from the plains. He thought it wasn't manly to ride a horse if it wasn't half wild.

He was handsome! And he could play the guitar and sing beautifully. Maria made up her mind-that was, the man for her! She knew just the tricks to win his attention.

If the ranchero spoke when they met on the pathway, she would turn her head away. When he came to her house in the evening to play his guitar and serenade her, she wouldn't even come to the window. She refused all his costly gifts. The young man fell for her tricks. "That haughty girl, Maria, Maria! " he said to himself. "I know I can win her heart. I swear I'll marry that girl."

And so everything turned out as Maria planned. Before long, she and the ranchero became engaged and soon they were married. At first, things were fine. They had two children and they seemed to be a happy family together. But after a few years, the ranchero went back to the wild life of the prairies. He would leave town and be gone for months at a time. And when he returned home, it was only to visit his children. He seemed to care nothing for the beautiful Maria. He even talked of setting Maria aside and marrying a woman of his own wealthy class.

As proud as Maria was, of course she became very angry with the ranchero. She also began to feel anger toward her children, because he paid attention to them, but just ignored her.

One evening, as Maria was strolling with her two children on the shady pathway near the river, the ranchero came by in a carriage. An elegant lady sat on the seat beside him. He stopped and spoke to his children, but he didn't even look at Maria. He whipped the horses on up the street.

When she saw that, a terrible rage filled Maria, and it all turned against her children. And although it is sad to tell, the story says that in her anger Maria seized her two children and threw them into the river! But as they disappeared down the stream, she realized what she had done! She ran down the bank of the river, reaching out her arms to them. But they were long gone.

The next morning, a traveler brought word to the villagers that a beautiful woman lay dead on the bank of the river. That is where they found Maria, and they laid her to rest where she had fallen.

But the first night Maria was in the grave, the villagers heard the sound of crying down by the river. It was not the howling of the wind, it was La Llorona crying. "Where are my children?" And they saw a woman walking up and down the bank of the river, dressed in a long white robe, the way they had dressed Maria for burial. On many a dark night they saw her walk the river bank and cry for her children. And so they no longer spoke of her as Maria. They called her La Llorona, the weeping woman. And by that name she is known to this day. Children are warned not to go out in the dark, for, La Llorona might snatch them and never return them. 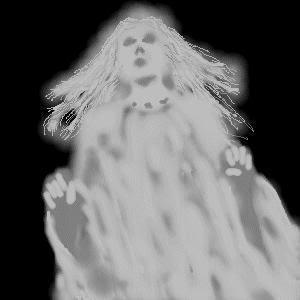 The Telltale Seaweed
retold by
S. E. Schlosser
Two sisters were motoring through Cape Cod late one stormy night in the early 1900's when their car broke down in an unpopulated area. Seeing an old, neglected house nearby, they went to the door and tugged on the bell-pull. When no one answered, they looked through a nearby window whose shutter was banging in the bitter wind. The window was broken. Through the window, they could see a library. The dust lay heavy over everything.
The women decided to take shelter for the night and find someone to tow the car the next day. They brought blankets in from the car, their feet leaving tracks in the thick dust of the floor as they settled in for the night.
Sometime later, they were both suddenly awakened. A bedraggled sailor, dripping wet, was standing next to the fireplace as if he were looking to dry himself before a non-existent fire. The sailor was glowing in the dark. The braver of the sisters finally called out a strangled: "Who is there?"
The sailor muttered something they could not make out and disappeared. Deciding it was a dream, the sisters lay back down to sleep. But the next morning, they found a patch of wet salt water by the fireplace, and a piece of seaweed. And there were no footprints in the dust by the fireplace save their own.
The sisters hurried out to their car. Soon, they were given a tow to the nearest village by a passing motorist. There they asked about the abandoned house. They were told the house had been empty for years. The people who owned it had a son who was driven from home by his father and had drowned at sea. The family had moved away because they claimed strange things kept happening at night.
A few months later, one of the sisters told her tale at a dinner party. A museum curator seated near her volunteered to test the seaweed for her. The curator sent her a message several days later. The message simply said that the seaweed she had found in the abandoned house was a rare type of seaweed only found on dead bodies.

I wish I new some more. There was one I partly remember but I tried to look on line and couldn't come up with anything close. It's local "The Green Man". But not the European Nature God. I'm going to ask my brother about it.