20 views
Random Queries > Does the Loch Ness Monster Exist?/WWYD (What would Yeti Drink)?

I would think they would have found it already, eh?

I would think they would have found it already, eh?"

Does this mean we're going to cancel the TerminalCoffee beer bash/monster hunt on the shores of Loch Ness?

That sounds like a good idea. Only good beer, though, please.

Smithwick's is the beer of choice for monster hunters everywhere.

Ah, in that case you're buying! hahahahhahahaa

Dan, you read The Lord of Light. That was one of my top favs as a teenager. Seduced me into reading more, that and Little Big.

After about eight beers I'd probably see him.

He probably senses alcohol and only appears when everyone's blood alcohol level is above the legal limit. That way, no one will believe them...

Dan, I am sure that is the reason Nessy has been so hard to locate, only the sober truly search for her! One needs to be legally drunk, and somewhere nearby. There is a lake near here, I wonder if it has a monster? Perhaps I should try that.

Dan, you are a genius.

Does anyone else think the Google Earth image is clearly of a boat with trailing wake?

There are some tasty ones, this would be a bad year to judge, but have you had there Summer Shandy on a really hot day?

I like that too. We can still have our party.

Doesn't the Summer Shandy use lemons in the brewing process?

It does, and I thought it would be terrible, but it is actually quite good on a hot day.

It's definitely a refreshing beer. I've liked all the Leinenkugel beers I've had.

Me too. Now I'm going to Mass for St. Monica's day. I will return, so don't be saddened by my lack of reply for about an hour or so.

yes, it does exist. the Yeti told me

I'm back, the Yeti can always be trusted. He and Bigfoot meet once a year in the Bahamas.

My wife loves Summer Shandy...I steal hers when she's not looking.

Well, since the Yeti and Bigfoot have entered this conversation, do we know what their beer preferences are? The LAST thing we want to do is piss off those two. 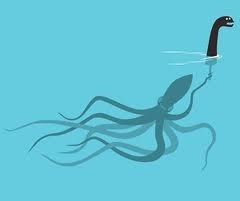 And I would guess that Bigfoot would drink this:
[image error]

But would Yeti? See, this is a complex matter.

RandomAnthony wrote: "I would think they would have found it already, eh?" 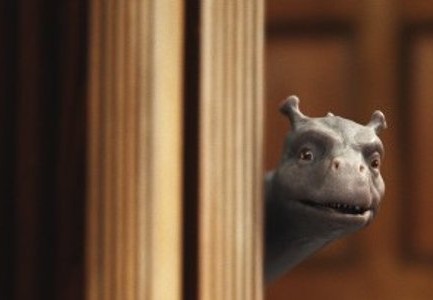 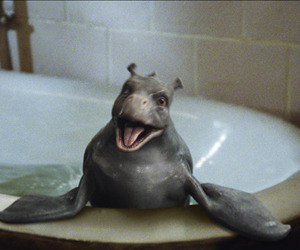 I thought Nessie was more of a Guinness gal.

I would think the same. So Guinness for Nessie, Bigfoot Ale for Bigfoot...Chhaang? Someone needs to teach me how to include lovely photos in my post.

You can nest the pics inside brackets, like this (open bracket, img src, =, nest web address in quotes like "", closed bracket):

Hey I have some authority here!!

According to Tibetan superstition, the Yeti drinks chang. In fact, he comes down from the mountains specificially to raid villages for chang.

I am too lazy to copy/paste what I wrote, so there's the link.

Chang is delicious, by the way, but Tibetans won't drink it if it's not Losar. It's considered very, very, VERY bad.

Also: chang is rice beer. Literally fermented rice. The Lhasa Beer is made of barley and is more like beer, whereas the chang I've had was whiteish and kinda reminded me of kongee, a kind of rice soup. I guess you could say it kinda looks like a milkshake?

There is HUGE controversy over Lhasa Beer being sold in the United States. It is ridiculous and I have somehow managed to embroil myself in the debate, pissing off Tibetan bloggers left and right. 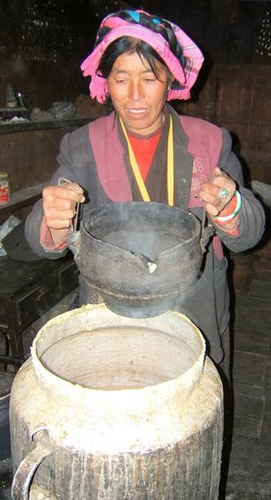 Nessie would NOT drink Guinness, as that is Irish beer, and Nessie is Scottish. All Scots are required to disdain all things Irish. It's the law.

Nessie would drink single malt Scotch, of course. Or, a nice cuppa. ;)

I have never heard of chang. Now I want some.

I wanna try chang too. And Jackie, whom has the ability to fly, Nessie might drink Guinness, but you are right, she is most likely to drink Lagavulin, which is my favorite single malt.

Angabel? is that last picture one of the Tibetan bloggers who is mad at you? If so, are they conducting magic against you?

Angabel - so Chang is a brand AND a type of beer? When my sister came back from Asia she brought me Chang and Beer Lao t-shirts.

I thought chang was what the astronauts drank.

NO, no, Larry. That's Tang. In other parts of the world they have Poon. Never! Ever! Let the two come together.

I used to LOVE tang. I lived on tang and pizza in high school.

I don't even see tang in stores anymore.

Now I want chang and tang.

ChangTang, that sounds like a brand name!!!!! We are in business.

Stephen: hahaha. This particular blogger can't do anything against me other than post about how I'm a traitor to the Tibetan cause and I keep using straw-man arguments. (That's funny; the blogger says that the American label of Lhasa Beer is yellow with red font because those are the dominant colors in the Chinese flag... but it's green in China, and I went straight to the company to get them to explain their thought process in designing the label and was blown-away by their response and how careful they were not to use any religious symbols on the label, as it's bad to throw those away with other trash and beer bottles end up being thrown away.)

Sarah Pi: I don't know if Chang is a brand. It wouldn't surprise me as many, many companies tend to use the Tibetan cause for their own purposes and it probably translates into something else in other Asian languages. But it is a beer, and a delicious one at that.

You can make chang yourself, although I don't know if they sell the fermentation stuff in the United States. Perhaps around Losar in Indian/Chinese stores, but I'd have to ask. You literally take rice, mix it with this stuff, leave it for a few days, and then drink up! They also use it to make a sort of oatmeal-like food with fruits and nuts that is not alcoholic, and again, very delicious.

How would ChangTang be pronounced? The first time I saw Tang in the States I pronounced it like the Tibetan word for chang... which has a long "a" and "Tang" has a short "a". ChangTang? or Chaaang Taaang? Or Chaaang Tang?

Oh my, I think Chaaaang Tang.

I always said "Tang" with more of a long "a" sound. Like it rhymes with "rang" or "bang". Which, now that I think about it, probably doesn't help you understand much how I'm saying "Tang".

RA: I pronounce Tang like "rang." Chang is pronounced with a longer "a" sound so it rhymes with... "bong." Erm.

If long "a" sounds like the name of the letter "a", as is the case with long vowels (e.g. the long vowel says its name) then I'm lost as to how "bong" could have a long "a" sound. I'm lost here. But not in a bad way:)

Well in the Tibetan language, it is transliterated as an "a". It's an "ahhh" sound. It's more gutteral. All of the Tibetan letters end in the short "a", thus: "ka, kha, kha, nga, ja, cha, chaa, nya..." so the short "a" doesn't really exist. Maybe it's not something in the English language. I don't know; now I'm confused, RA! At least we are not having this discussion about "e" because it, apparently, can be pronounced in 22 different ways in the English language.

We need a linguist to our rescue!