Mod
Hysterical that he was "turned in" by neighbors. AND that some neighbors prefer the misspelled version.

Mod
You spelled neighbours wrongly.....I am going to report you as an English language vandal.

I'm going to this article when I teach "Signos de Punctuación" in my Spanish class.

They should put his face on American dollars'.

Good luck with it, Gail!

Mod
Nothing new under the sun. Way back in the Prehistoric, Van Nuys Junior High School, 1949, it was considered clever to write "Bored of Education" across one's notebook.

I coulda been a contender.

Haha. Maybe our new favorite vandal should take a look at the sign for Men's Clothes I saw on my vacation.

I thought the correct expression was, "Piss off, wanker!"

Åsa wrote: "Haha. Maybe our new favorite vandal should take a look at the sign for Men's Clothes I saw on my vacation."

Mod
I think it should read Mens' Clothes (plural possessive).

Mod
Men is already plural, so I vote for "men's clothes."

Or should it just be mens clothes as it is used more as an adjective rather than a possesive thingee....?

I agree with Newengland.

Debbie, a "possessive thingee" is more traditionally known to us dinosaurs of grammar as "an adjective of possession". It's not a choice, it's a subgroup (one of several).

At least, it was that way in 1970 when I was a British student of English Language.

Anyone wanna buy the laundry concession at a nudist colony? The pay is lousy, but it's light work. 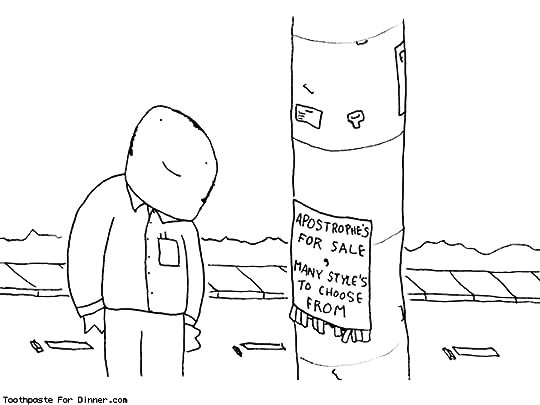 I wouldn't normally argue with a dinosaur of grammar - especially about adjectives of possession - but in this instance I would like to record my two bobs worth - it's Jesus' clothes... not Jesus's clothes; Dr. Seuss' sense of humour;

Of course I can find someone to agree with me - you always can on the web:

"It is customary, however, to omit the 's when the last syllable of the name is pronounced /-IZ/, as in Bridges', Moses'. Jesus' is an acceptable liturgical archaism."

"B. The bare apostrophe is preferred:
- for words ending in -nce (stance');
- for many classical names (Aristophanes', Jesus', Moses');
- where the juxtaposition of two or more [s:] sounds would
cause an awkwardness in pronunciation (thesis')."
http://alt-usage-english.org/excerpts...


"It is as simple as that. However, we do have one area of particular difficulty – the matter of singular nouns ending in s. Here, the usual rule is to add apostrophe + s ('s) to the s-ending singular as long as pronouncing the extra syllable (which sounds like "iz" or "ziz") is not awkward. Thus, we have: James's house, Tess's car, and the boss's office. Some s-ending singular nouns, however, become awkward to say if we add "iz" or "ziz" to them. Try sounding out "Jesus(iz) teachings," "Moses(iz) laws," or "Sophocles(iz) plays." It's tough. Thus, in these instances, we use only the apostrophe: Jesus' teachings, Moses' laws, or Sophocles' plays. In such instances, though, we should try to avoid using the possessive case altogether and write: the teachings of Jesus, the laws of Moses, the plays of Sophocles."

Mod
Yeah, I've seen that hair split before, too (on the 's or just ' thing). Only thing is, I can never remember the rule (or the sound, or the exception, or most anything anymore).

Thanks for the reminder, Robyn.

NE, do you prefer your hare jugged?

Mod
I use wineskins, not jugs. What do you take me for... Snuffy Smith?

As you say, enunciating Jesusiz and Mosesiz is clunky. I included Jesus in full expectation of discussion. I wonder whether that explains why He is also called Jesu in some works?

However, I've never seen Moses referred to as Mose!

Punctuation is intended as a courtesy to the reader, in order to make the writer's meaning more clear than it would otherwise be.

I wonder how helpful the rules about Euripedes and Xerxes et alia would be if we didn't all know who these great men were?

Actually, in Hebrew, "Moses" is "Moshé."

Mod
More and more modern writers are giving up the use of quotation marks for dialogue. Can you say, "Annoying!"?

Mod
I like the clean look it gives to the text. I tend to leave them out in poems unless it's not understandable without them.

That said, in novels I prefer having them.

Mod
Yes. I speak of novels. Hopefully it's a passing fad.

Mod
No, never in movies, though I have a few TV shows to my credit.

It reminds me of when I first learned sign language and learned New Zealand sign, where we had to sign the apostrophes and commas etc! Tedious. Then I learned Makaton which is more or less shorthand sign - the absolute opposite.

Imagine if all the characters in movies had to sign in the speech marks!