Mod
This workshop is the sole territory of Yukirin/Yukino/Yuki, and only she may post here unless you have her express permission.

Freelancer (Pirate). She's kind of a pirate, but it's more like she just follows her brother around. She's also a thief. 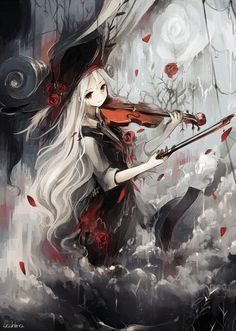 A dark shade of red

She always has this pirate hat on, but her brother claims that he did not give it to her and that he has no idea where she got it. While she claims she didn't steal it and that she's had it as long as she remember, despite her brother not being able to remember it at any point in the girl's childhood.

She has a small scar on her forehead, hardly noticeable. Her brother claims he remembers vividly that she had tripped and gotten that scar when she busted her head open, while she claims that she was pushed by a friend because they were playing pirates.

~When Chiyo was 6, their mother died and she and her brother were left alone, orphaned. Her brother had only been 12 at the time and had to take care to the young albino child. He would steal and do whatever he could to make it by. He refused to teach Chiyo how to do the things he did, so she taught herself. She learned to steal, fight, and had even killed somebody at some point. None of this mattered though. She had always seemed a bit... out of it. She recalled things no one remembered, her memories a whole jumble. She would say something that never happened, but she would sound so sure of it. Even when her mother was alive, she would mention this friend she had. Their name was Red Rose, which, conveniently, was a pirate that had died over 100 years ago. She seemed so convinced, but no one could vouch for what she said, so she was deemed mental.
She stole a violin, and she would always be talking to herself. Whenever this old lady nearby asked if she needed help learning how to play the violin, she apparently responded with "No thank you, Ma'am. Red Rose is helping me."
Strange enough, she learned how to play the violin by herself. Everyone thought she must have gotten help from the old woman, since she was only 9 when she was able to play her first melody properly. Though the old woman kept insisting she did not help. When she was 10, she met this boy whom she'd always talk to. Everyone seemed to think Chiyo her crazy was infectious, seeing as the boy she hang out with started talking about this "Red Rose" as well. All the kids would always make fun of them, call them freaks and insane. Soon enough, the boy died and Chiyo had her first kill. It wasn't her fault. He was truly going insane. He was starting to scare her because he was muttering something under his breath, his knife in hand. He attacked her, so it was self defense. Everyone thought she had just convinced him of this tall tale known as Red Rose and then killed him when he trusted her.
As she grew, she only became more and more distant from everyone, including her dear brother. Her smile? Fake, non geniune, plastic even. Every little word that was said, everything she did, was carefully thought over, before and after. She always finds something to chastise herself over, something to worry and fret over. Confident outwards, a scared little girl who over-analyzes inwards. "Crazy? Unique more like it." Unique? Ha! More like Different, weird, doesn't belong. "Your a killer!" Yes, exactly. I killed someone, but wouldn't anyone? Humans are selfish, weak. If it were do or die, wouldn't the majority pick do? What makes me any different?
Her thoughts overrides her actions, her words. She grew more and more insecure, and ended up joining the Revanant to get away from it all. To get away from her brother, his expectations he unconciously placed on her. "You're better than that, Chi." Ha! Who are you kidding? You barely know me!

~Chiyo hates having to be serious and is always this huge ball of energy. She's full of sarcasm and is always trying to do something fun. Looking for Robin? Just find this bean, she's most likely going to be right by his side, following him around like a lost puppy. Unless of course, he's with his crew. She kind of looks up to her brother in a sense, and despite the rumors, he never really minded her company. She's always cheerful and pays no mind to others. She doesn't really talk about Red Rose anymore, but if you read through her journal, you'll likely find plenty. Robin, despite everyone thinking Chiyo is crazy, just thinks its an imaginary friend that kind of just stuck around. She's always smiling, even during depressing situation or bad situations that turn south. Rumor has it, she smiled through her own mother's funeral. Only furthers the whole creepy/crazy thing. Just because she's always smiling, doesn't mean she's crazy, she just has trouble expressing emotions. She seems extremely dense, but she's not as stupid and innocent as she lets on. She has this entire inferiority complex no one really knows about.

*Note: If there's a quote, it's something she's said or something that was said to her. If it's striked through, it's her inner thoughts toward said subject.

She has an Older brother by the name of Robin.

{Reason For Joining This Crew?}:

Surprisingly, she didn't join the same crew as her brother. In fact, she joined The Revanant. Why? Why does she do anything at all? Red Rose, Obviously. But that's not a legitimate answer, seeing as Red Rose supposedly doesn't exist. She has this little inferiority complex no one knows about. Insecure about every little thing she does and having to meet up to her brother, who is basically perfect in her eyes, scares her. She joined The Revanant for the sole purpose of not being in the same crew as him and not having to be compared to him by the civilians or possible crew mates. Joining a different crew was an escape route.

Guns (Too loud), People who think she's crazy, rumors, Perceptive people, anyone who gets too close.

Despite always being next to her brother, she's always very distant. She'll tell him everything is perfectly fine, but it's likely her covering something up.

~Yuki's Template, Please don't use without Permission! If you wish to use this template, don't be afraid to PM me for Permission. I'm not all that mean, so I won't bite you or anything.~ 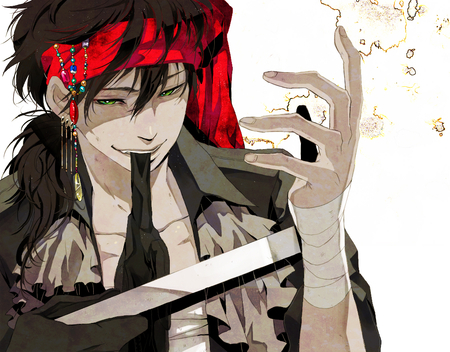 His Earrings and hair pieces (in the picture)

Has a large scar going across his back from a previous injury.


{Reason for Joining this Crew?}:

~Yuki's Template, Please don't use without Permission! If you wish to use this template, don't be afraid to PM me for Permission. I'm not all that mean, so I won't bite you or anything.~ (hide spoiler)]