Mod
In April we will be reading Pale Fire by Vladimir Nabokov in our Comedy category - who's in?

Me. Let me move it up the TBR pile.

I'm in. I started a digital version but because of the style I have ordered a paperback so I may be late to the party this month.

I plan on reading, but I won't be able to start it until the last half of the month.

I'm really enjoying this. It takes the concept of unreliable narrator to an extreme.

I've decided to read the poem one canto at a time and to read the notes attached to that canto, then move on to the next. But having done that for two cantos (canti?), I think it would work just as well if you just read the whole thing in the order in which it's printed.

I was musing about that just now. The foreword says to read the poem with the notes and I was wondering whether to or not.....

But the foreword is written by Kinbote - you'll see quickly why you shouldn't believe a word he says :)

Yeah I got that ;-) I read the poem first. I am really enjoying this

I like it too, so far. Just got to the part where the Zemblan is finding all his landlord's notes.. Mon. Wed. Fri. Liver, Tues. Thu. Fish.

I'm about half-way through, or at least I've read up to Canto Three and all the notes so far. I guess I'm the wet blanket (or Candide's Venetian Doge, depending on how you look at it). Kinbote's style is starting to wear on me, although I think there are a ton of cross-references that a close-reader could zoom in on and exploit. For instance, the words shade and pale show up, both in the poem and in Kinbote's notes, too often for it to be just a coincidence. Lots of puns, lots of cleverness. (For instance, someone who at one time was Zemblen, who then separated from there might be dis-zemblen, or dissembling--don't know if that's reading too close or not.)

Anyway, lots of verbal tricks but Kinbote just gets on my nerves.

Totally off-topic--I never noticed before that the NYSE abbreviation for the Disney company is DIS, the same as the infernal city of Hell that we read about in Dante's Divine Comedy. That's kind of funny ha-ha.

Mod
just started this - read the intro - now need to combine the poem and notes
I've got it as a PDF so I can just have 2 copies open and display them side-by-side of my laptop screen - it looks really good and think it will work well...

I've read further, but keep setting it aside.

I've gotten as far as the young king's short marriage, which, as I said somewhere, was like a scene from von Sternberg's Scarlet Empress.

I don't see the point of trying to read the poem with the notes.
I think the whole joke is how worlds apart the poet and the editor are.

I finished a while ago. I think skipping back and reading the poem with the notes enhances the experience as it highlights the disparity between the author and his subject and it’s where a lot of the humour comes from. It does make it a bit laborious though. It was a short book but I ended up investing quite a lot of time and effort into it. It was definitely worth it though as it is multi layered and faceted and lyrically quite beautiful. I’ve noticed that a lot of His work is quite poetic and I wondered if the fact that he was writing in his second language meant that he was “braver” in his word choices than some English speaking authors. He uses little used words that are correct but that an English speaking author would have replaced with a more prosaic word, maybe out of habit or laziness. What does do guys think?

I'm looking forward to reading it as my next book, and I'll benefit from your comments when I do!

Nabokov has his themes. A self-deluding sociopathic pervert takes advantage of others and explains at great length how he is put upon. At least it’s not a teenager being abused here. The book is formally brilliant, but it’s a trial to read it.

That's really not a term I'd have used for this book. He's obviously homosexual, but beyond that there's nothing that's not explained by having to be circumspect due to the prejudices of the times. You have a point for Lolita, where Humbert Humbert is a pervert (although that book is a work of genius about how people manipulate their own world view in a way that exonerates their own behaviour, rather than being a book about paedophilia) but not Pale Fire.

I’m not sure that I agree that the point the protagonist is a pervert in this book stands but I think the point that the characters in his work generally have a sexual “perversion” is valid. At the time of writing homosexuality would have been classed as a perversion. I have come across incest between siblings and cousins as well as peadophilia in other works as well. His characters do seem to be egotistic and self absorbed as well but he creates a magnificent beauty in his language to describe the depraved and antisocial behaviour of his worlds. It’s a nice symbiosis.

I’m not going to argue the point at length, but let me make this clear: I don’t think gay men are perverts, but I believe Nabokov does (and laughable, to boot). It’s one of the things that’s putting me off about this book.

Even though this novel glittered with wordplay and allusion and puzzled the reader with layers of deception, it was a slog. The unreliable narrator is an unlikable person as well. I marvel that the poet whose work he is supposedly commenting on could stand his company. I give credit to Mrs. Shade for seeing through him, at least until the end. He bears a family resemblance to Humbert Humbert of Lolita except that he is not as truly wounded by the lack of sympathy of an unfeeling world as the pedophile seemed to be. No, I think Charles Kinbote, whoever he may be, knows very well why people consider him a fraud. It's not clear to me why he keeps it up, and blaming mental illness is a convenient alibi.

I'm glad I read this book, and I shall never read it again.

I just got to Aunt Maude's clippings, and OF COURSE they are actual ads.

Thought I'd post this here rather than in my notes: 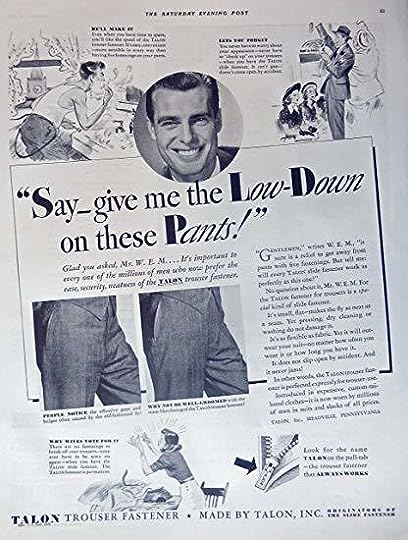 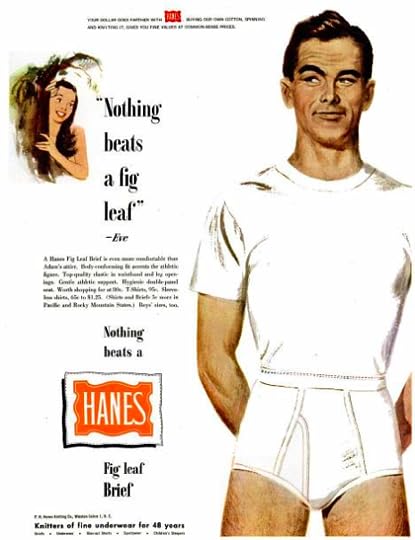 Christopher wrote: "I just got to Aunt Maude's clippings, and OF COURSE they are actual ads.

Thought I'd post this here rather than in my notes:

Mod
dnf-ed this
just terrible
I'm sure Nabokov was very clever
but either he was too clever for me, or this is a case of emperor's new clothes

although I suspect it may have inspired this:
https://www.youtube.com/watch?v=2YRfJ...
in which case it's not a total loss

"Corny as a cook out chef's apron."

I couldn't find an example online of the really corny men's aprons- a 50s trend which never died out completely: 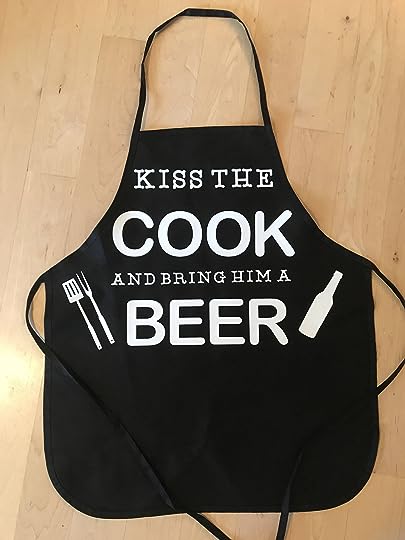 PS- finally found this, which has stuck in my mind- thirty years, not sixty- 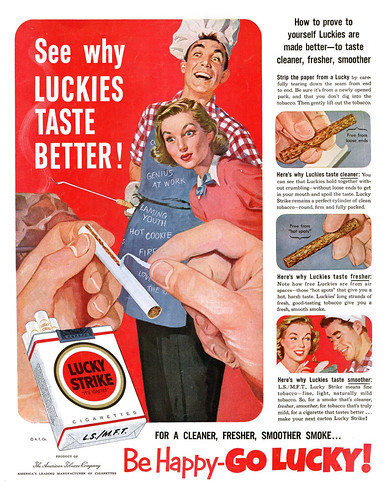 See the comments on the apron: "genius at work" "flaming youth" "hot cookie."