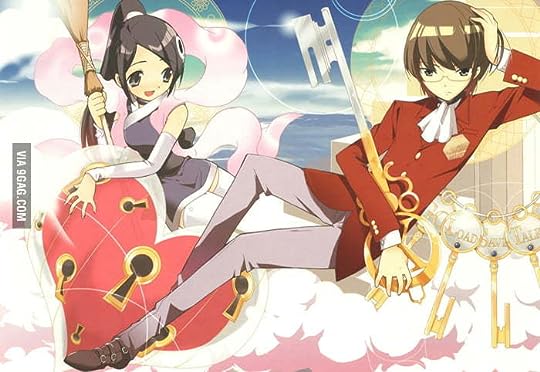 Is there an anime adaptation?
Yes

Keima Katsuragi, known online as the legendary "God of Conquest," can conquer any girl's heart—in dating sim games, at least. In reality, he opts for the two-dimensional world of gaming over real life because he is an unhealthily obsessed otaku of galge games (a type of Japanese video game centered on interactions with attractive girls).

When he arrogantly accepts an anonymous offer to prove his supremacy at dating sim games, Keima is misled into aiding a naïve and impish demon from hell named Elucia "Elsie" de Lute Ima with her mission: retrieving runaway evil spirits who have escaped from hell and scattered themselves throughout the human world. Keima discovers that the only way to capture these spirits is to conquer what he hates the most: the unpredictable hearts of three-dimensional girls! Shackled to Elsie via a deadly collar, Keima now has his title of "God of Conquest" put to the ultimate test as he is forced to navigate through the hearts of a multitude of real-life girls.

I was really looking forward to enjoying The World Only God Knows. I did not. Don't take me wrong, the plot is original but it just gets so overused during the first volumes that I just got bored. Yes, each girls was different, but to me, they were cliché girls. And Keima even though interesting bored me at some points with his view of the perfect girl and that it was easier to date an game avatar or how he perceived certain situations reality vs game (ex: the popstar evolution in game vs reality... ). I wish I could have enjoyed more towards the end as many people have but I disconnected from the story and was just glad to finish it.

I would recommend it to many people but to me, it was a long26 volumes.

Do I recommend it: