My projects for this session of Camp.

Possible entries for the "Tales from a Modern Bard: Original Fairytale Challenge."
http://talesfromamodernbard.blogspot....

The Spider and the Fairy
A short tale, in which a spider and a fairy bargain for what they want.

The House and Its Occupants
A tale about a haunted house, a girl, her brother, and his dragon.

The Corruption
A legend from the world of Bookland, telling of the first Darkness and the corruption of the elves.

Project/s: The Spider and the Fairy, The Corruption

Snippet:
The House and Its Occupant

“So why does the House want you so badly?”
Mara gave him a look: “If I had figured that out by now, I would have fixed it.” Evidently, he interpreted it as “You’re as dumb as a sock if you haven’t figured it out by now”, because he rolled his eyes.
“You gave me that look when I tried to test spaghetti by throwing it on the ceiling.”

“Darkness? Why would I fear darkness, when I always have the light of the stars with me?” He crooked his fingers. An orb of light, as cold as the stars themselves, appeared in his hand. “Even with your power, you cannot perform feats such as this.”
“My power is not my own.” Janis trembled, whether from fear or anger was known only to her. “It is not for me to command, but to guide.”
“And so you allow others to suffer.” Roebuck’s voice cracked in sorrow. “I couldn’t just watch them die.”
Janis eyed him. “And yet, that is all you watch. Death. ”

WELL That snippet is good. :P Also can I just say that I love third-person POVs?

Merie wrote: "WELL That snippet is good. :P Also can I just say that I love third-person POVs?"

Ah, thanks. :D
Yeah, close third POV is what I prefer, and usually write in. This Narration Challenge is very trying...

Snippet:
With the unraveling of the secrets of the stars came the unraveling of the light. Dawn took longer and longer in coming. Both moons and the sun waned in their power.
Janis intreated the Voices: “Allow me to attack my brother. Give me the power to crush this madness.” (For the Voices are the source of power for the Woodlanders.)
Their answer: “No.”

Merenwen wrote: "Merie wrote: "WELL That snippet is good. :P Also can I just say that I love third-person POVs?"

Ah, thanks. :D
Yeah, close third POV is what I prefer, and usually write in. This Narration Challeng..."

:D I write in either third-person omniscient or first-person.

Project/s: The House and Its Occupants, drafting a reply to Kyle Robert Shultz’s newsletter (evidently I had 20 drafts in my email?? Idk how that happened, but I had to clean it up.)

Snippet:
Weston scratched his head. “That’s it. I’m visiting every weekend, and taking you out.”
“Yes, yes, fine.”
“Now I know you’ve lost it.”
“What?” Mara’s ecstatic smile flinched briefly into a frown.
Weston leaned against the back of the chair. “You just said yes to me and my offer to take you out into society.”
After a shrug, she said, “Oh.” She leaned towards the dragon, hand extended.
“Don’t start ‘dragon whispering’ to my dragon.”
Of course, she didn’t listen.

Well that one is great :D

Merie wrote: "Well that one is great :D"

Project/s: The Spider and the Fairy, editing

No, the best part of fantasy. ;P

Elizabeth wrote: "No, the best part of fantasy. ;P"

Hey, I've been meaning to ask: what kind of magic systems do you prefer/like? I have a couple of books I'd like to recommend, but I don't want to recommend something that you probably wouldn't like/even bother to pick up. :P

Ha, ha . . . I don't actually appreciate a lot of "magic" books .. . :P But the dark magic is an absolute no, no. :) You can recommend me things and I'll look through them, but I don't have a definite, clear answer for you.

How so? Like, any mention of dark magic/anything that might entail that (eg, mentions of witches/sorcerers/enchanters/etc.), or just going into unnecessary detail about the darkness of it all?

A note: Mara’s brother will go through several names during this project, due to a curse he’s under (it basically forces him to choose a new name for himself every so often, or risk being drained of life). Before, he was Weston. Now, he’s Jozo.

Snippet:
“What in the world is this thing?!”
“I told you,” came the muffled reply. “It’s a weird…” A prolonged silence. “Death. Trap. Thing.”
“My eloquent, myth-inundated sister is at a loss for words to describe the otherworldly creature in her basement.” Teeth gritted determinedly, Jozo slowly lifted one foot and set it down in front of the other. The thing seemed to be less grippy if he went slowly.
“It has a little bit of everything in it, alright?! It’s plant-based, but it isn’t a sylph or anything like that. It seems to be fueled by or is a product of strong residual emotion, but it’s nothing like a banshee or poltergeist. There’s also—”
“SAVE YOUR THEORIES FOR LATER, IT’S RUDDY TRYING TO EAT ME!”

Hannah-- I agree, magic is a tricky thing in fantasy. But as a lover of fantasy, I've always appreciated well-done magic systems... I mean come on. Narnia. Fawkes. Stuff like that xD

That's where I'm leaning Merie, but to answer Merewen's question . . . . I don't do a lot of dark fantasy, mainly because it's more demonic than anything else. Now you may not agree with me on this subject, however, the term "magic" always referred to sorcery and witchcraft. Now not as much and I'm still hesitant to read "light magic" books, because of the real meaning. If you understand my point. :P

Btw that snippet is beautiful, especially the last line. =)

Elizabeth wrote: "That's where I'm leaning Merie, but to answer Merewen's question . . . . I don't do a lot of dark fantasy, mainly because it's more demonic than anything else. Now you may not agree with me on this..."

Ah, gotcha. :)
You probably wouldn't enjoy the books I have in mind then...
Most of them are magic-heavy, more along the lines of Diana Wynn Jones than Tolkien or Lewis. Not dark (I can't stand much dark stuff either), but definitely not light (as in weight/detail, not the element).

I really enjoy magic systems in general. So long as the rituals/whatever aren't described/have a ton of detail, like describing measurements in a witch's brew, or detailing use of a ouiji (sp?) board/other demonic item you can easily acquire IRL, I'm okay with it.

Merenwen wrote: "Elizabeth wrote: "That's where I'm leaning Merie, but to answer Merewen's question . . . . I don't do a lot of dark fantasy, mainly because it's more demonic than anything else. Now you may not agr..."

Magic doesn't usually bother me. I don't like it being treated as witchcraft or sorcery either (being a learned subject, that kind of thing), but if it counts as a natural element of life, then it really can't go under the same meaning as wizardry. :P

You're doing great! Keep it up!

Merie wrote: "Merenwen wrote: "Elizabeth wrote: "That's where I'm leaning Merie, but to answer Merewen's question . . . . I don't do a lot of dark fantasy, mainly because it's more demonic than anything else. No..."

Elizabeth wrote: "Glad to have helped. ;)

(Started at the beginning again, cuz the way I was writing it wasn’t working out.)

Snippet:
Long ago, when the dragons danced in the sky and churned the fires of the deep, the elven people were one. No division of darkness separated them; all were called by one name, none of this ‘Woodlander’ and ‘Starlighter’ business.
There were no kings, no queens, save in distant warring human groups. Perhaps this distance is what brought about the Darkness. The Great Sorrow, as some call it. This Sorrow trapped the dragons in the mountains, stole their fire, and drove many to death. It drowned the world in darkness.

(Started at the beginning again, cuz the ..."

Edit:
For whatever reason, the gif is coming up as an image error, so here’s the link by itself.
https://images.app.goo.gl/iGnpVmsbWpB...

Oh? Did you enjoy my telling that much? You want me to continue? Well. Who am I to disappoint eager learners?

Janis’ neglect of her brother hurt him a great deal. He tried to find a way of helping the humans further on his own. Evidently, he’d never listened to the tale of Michi the Matchmaker, or he would know that beginning such a task alone was sure to lead to ruin.

So...uh...since when does that mean the characters do what I tell them? XD

Writing varies between this: 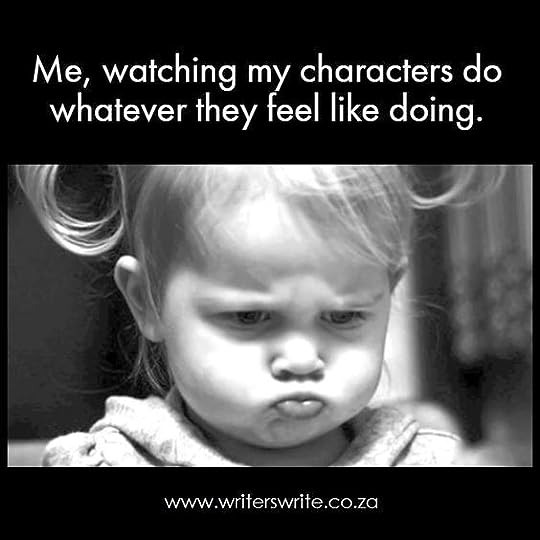 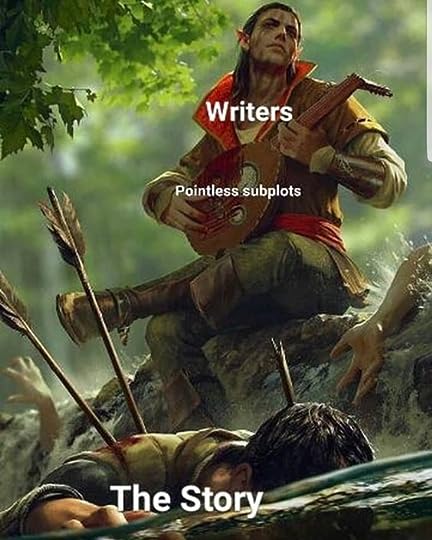 I’m surprised I have anything legible today. I’m tired. I’m waffling between wanting and not wanting to write (anything whatsoever, not just these projects). And I’m tired. I said that already, yeah? z_0

Snippet:
Hector frowned. “Why? I thought she loves dragons.”
“Yes, she does. And if she knows there’s a dragon nearby, she won’t stop until she’s done her weird…animal-whisperer thing.”
“Like Dr. Doolittle?”
“Doctor who?”
“No, Doolittle.”

Project: Q&A for charries from Hazel West’s new book, Flower of the Underworld!

Project: an email to a newsletter (I'm going to earn the Consistent Writer badge, I don't care what kind of writing I have to count as a project)

Project/s: Another small bit of the aforementioned Q&A (I went a tad overboard on the amount of questions...)

Snippet:
The Shadow leeched out from the forest as ooze from a sore. Only, much faster, and deadlier. It entered the man, snuffing out the light and killing him before he’d hit the ground.
Writhing, and eyes aglow with a dead light from the source it had eaten, it went for Janis. She used her power, then. Her voice. She sang. (Tarron! Stop chuckling, and don’t worry, I’m not going to sing.)

Project/s: An exercise from Chapter One of Fiction Writer's Workshop

Snippet (first line):
Their out-of-synch footsteps thudded against the concrete. The evening air was tense with unspoken words. Ariana didn’t know how much longer she could stand it.