The first book we will be reading is called Unwanted: Dead or Alive by Gene Shelton 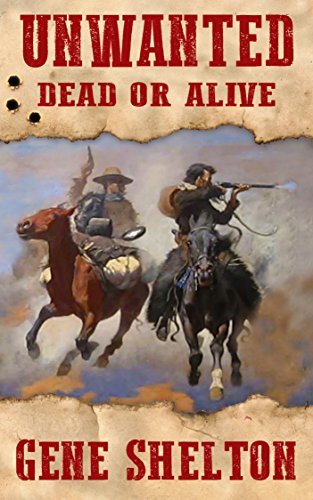 It can be downloaded [or purchased in various forms] here: https://www.amazon.com/Unwanted-Dead-...

We picked this book because it appears to be very different compared to other books typically read in clubs. We are a somewhat unconventional club, so why not pick an unconventional book to read?

Feel free to discuss the book as you read it but make sure to warn everyone if you post spoilers!

Mod
I'm so excited to start this book.

Interesting first book. I just downloaded it and I am starting it now.

Mod
I started it and I am enjoying it so far. I never read a western before.

Mod
I started it as well and I am also enjoying it. The writer is extremely descriptive. I feel like I am there with them

Hey guys, I've finished the book. Will do my post soon. I may not answer all the questions. I will probably just discuss what I liked and disliked :D

Hey guys, I've finished the book. Will do my post soon. I may not answer all the questions. I will probably just discuss what I liked and disliked :D

Mod
I finished the book a few days back, but haven't had a chance to come online.

So, how would you all like our first official meeting to be? We could do one or more of the following:

1.) We come online when we have a chance and do our write up

2.) We all come online at the same time and do a discussion, which can be either:
- answering the questions one at a time together and discussing them individually
- just being online at the same time and doing our own posts and responding to them, sort of giving the feel that each person is giving their thoughts on the book while the other listen

If you have any other suggestions, let us know!

I find your first book to be quite unique in choice. Westerns are actually a very underrated genre and are not enjoyed by everyone. Even though the month is up, I will definitely be reading this book!

I like the idea of trying to manage a time for everyone to be online at once and discussing. That makes it feel like an in person type of club. However, with everyone's different time zones and schedules, that may not be possible.

I just finished the book. I liked it but I think at times it was very slow. But I really liked the humor in it.

Mod
I finished the book as well. I liked it but I thought it was a bit slow at times. I will probably add a longer review later :)

Mod
I enjoyed the book a lot. This was my first time reading a western, so I didn't really know what to expect.

Did anyone else notice that this book was originally published in 1996? That surprised me.

I will answer some of the questions I had posted in the other topic:

1. What did you like best about this book?
The author is extremely descriptive. I loved the way he wrote. In the beginning when he is describing how frigidly cold it is as the guys ride, I felt like I was there with them. I also loved the witty banter between Hawkins and Dobie. I found myself LOLing quite a few times.

2. What did you like least about this book?
My only complaint about the book was that it dragged in places. Sometimes I felt it was too slow and nothing was happening. I think it could have been a tad shorter to have been a really good read.

4. Which characters in the book did you like best?
Hawkins. I just found his fear to be really relatable for some reason. I would be REALLY scared to be on the owl hoot trail too!

5. Which characters did you like least?
The bankers who took Milhouse's house

6. If you were making a movie of this book, who would you cast?
Hmm, I could see Brad Pitt or George Clooney as Dobie and Matt Damon as Hawkins for some reason. I could see Johnny Depp in both roles.

8. What other books by this author have you read? How did they compare to this book?
I have not read any of his other work but he has written a lot of books.

9. Would you read another book by this author? Why or why not?
I would read some more of his books if they were free :P

10. What feelings did this book evoke for you?
I didn't really feel any strong emotions in this book, but I was upset at how the corrupt bankers took Milhouse's house and then they framed the guys.

13. If you got the chance to ask the author of this book one question, what would it be?
Were you a cowboy or do you have any experiences with cow boys?

14. Which character in the book would you most like to meet?
I'd like to meet Hawkins and Dobie

16. What do you think of the book’s title? How does it relate to the book’s contents? What other title might you choose?
I liked the title. It was what caught my attention along with the cover. I think it does suit the book as they were wanted men, both dead and undead. If I had to make another title for this book, I might call it "The misadventures of Hawkins and Dobie"

17. What do you think of the book’s cover? How well does it convey what the book is about? If the book has been published with different covers, which one do you like best?
I liked the cover a lot. Along with the title, it caught my attention. The cover can be a tad misleading because it looks like it's some big thrilling adventure and to some extent it is, especially considering this book is over 20 years old.

19. How original and unique was this book?
I think it was original but the premise of the story is something that we have seen before in both books and movies, with or without there being cowboys.

22. Did this book seem realistic?
I think so. It was obvious both guys knew nothing about being baddies, so the mishaps that occur are definitely believable.

23. How well do you think the author built the world in the book?
I think he did a really good job, especially with the way he wrote their dialogue. The spelling of certain words really made me laugh because the way you would say them definitely sounded like something cowboys would say.

24. Did the characters seem believable to you? Did they remind you of anyone?
They definitely were believable to me. We all know that one person who thinks they know everything and don't [Dobie] and we all know a Hawkins who is always walking on eggshells and scared of doing wrong.

25. Did the book’s pace seem too fast/too slow/just right?
Too slow in some places and just right most of the time

Luana wrote: "I enjoyed the book a lot. This was my first time reading a western, so I didn't really know what to expect.

Did anyone else notice that this book was originally published in 1996? That surprised m..."

Hello Luana! I really liked reading the answers to the questions. I agree with so much of it. I thought the dialogue was very well written and often really humorous. I also loved how the author included the cowboy dialect in the book. I like the banter too. I also really liked the descriptiveness in the book. The author was great at describing the weather conditions too. I think I liked Hawkins the best out of all the characters.

I thought this book was strictly okay. I enjoyed parts of it, but it was a bit too slow for my liking. I liked both Dobie and Buck. Marylou was annoying and I didn't like her too much most of the time. I think the story could have been really great if they shortened it and made the mishaps between the guys more exciting. But keeping in mind when it was written, and I didn't know it was from the 90s until now, it makes sense on why it was so mellow. I do agree with everyone's comments about the great descriptive writing - that was definitely one of the reasons I kept reading and finished the book.

I am glad this book was free and am so happy I found this book club! I get to read different books for free and not be upset if I don't like them because I didn't spend a penny on it lol

I started this book and it's quite interesting so far. Buck and Dobie are definitely down on their luck good guys. Rooting for these two boys!