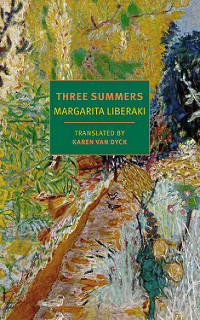 Three Summers is the story of three sisters growing up in the countryside near Athens in the years before the Second World War. Living in a big old house surrounded by a beautiful garden are Maria, the oldest sister, as sexually bold as she is eager to settle down and have a family of her own; the beautiful but ever-distant Infanta; and Katerina, dreamy but also keenly inquiring, through whose eyes this story of three summers over which the girls’ lives take the shape of adulthood is mostly observed. The girls share and keep secrets, fall in and out of love, try to figure out their parents, take note of the doings of friends and neighbors, wonder at others and themselves. And Katerina, we sense, though she may have lost her childhood to time, will find herself in the future as a writer.

When Three Summers came out in French, Albert Camus was moved to write a letter to Margarita Liberaki: “The sun has disappeared from books these days. That’s why they hinder our attempts to live, instead of helping us. But the secret is still kept in your country, passed on from one initiate to another. You are one of those who pass it on. I feel a sense of complicity with this book.” Karen Van Dyck’s luminous translation brings a beloved classic of modern Greek literature to life in English.

Mod
Publication date has been pushed back from May 7 to July 9.