This topic is about A King Alone
59 views
Book Discussions (general) > A King Alone, by Jean Giono 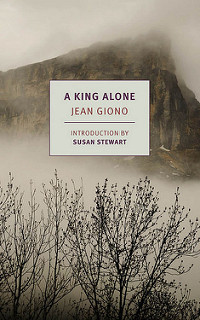 “The book started off entirely by chance, without even a character. The character was the Tree, the Beech, and the starting point—that was the discovery of a crime: a dead body turns up in the branches of this tree. There was the Tree; there was the victim; an inanimate thing, a corpse. Well, the corpse requires a murderer, that’s clear, and the murder requires investigation. What I wrote was a novel about the investigator. That’s what I wanted to write, but it had to start with a tree that had nothing to do with the story at all.”

Such was Jean Giono’s account of how A King Alone came to be. The title alludes to Pascal’s saying “A king without distraction is a man full of wretchedness,” and the book is set in a remote Alpine village in the mid-nineteenth century. At its center is the enigmatic officer Langlois. In deepest winter, the inhabitants of a remote Alpine village mysteriously begin to disappear. Langlois comes from afar to protect the village and investigate the crime. Giono’s novel about a tiny community at the dangerous edge of things and a man of law who is ever more a man alone could be described as a metaphysical Western. It unfolds with the uncanny inevitability and disturbing intensity of a dream.

Mod
The publication date has changed from April 30 to May 28.

Mod
This is changed again to June 25.

I was hoping someone could enlighten me about what this book has to offer. But I have yet to learn.

Renate wrote: "I was hoping someone could enlighten me about what this book has to offer. But I have yet to learn."

I finished reading this yesterday and really enjoyed it. The author utilizes the contrast between darkness and light to create strong imagery throughout. The prose is impressive as well. As far as the story goes, the manhunt and the wolf hunt that make up the first two thirds of the novel are great. The final third of the novel seems to be where most people get tripped up. It's a quick read though, so it is worth the effort to check it out.