This topic is about My Friends
40 views
Book Discussions (general) > My Friends, by Emmanuel Bove 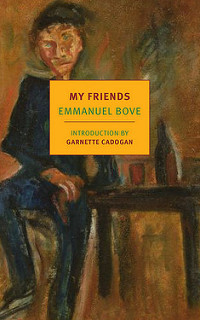 Publication Date: May 7, 2019
Pages: 168
Introduction by Garnette Cadogan
Translated from the French by Janet Louth
Originally published in 1924.

Emmanuel Bove was discovered by Colette in the 1923, and other admirers of his work include Samuel Beckett, Wim Wenders, and John Ashbery. My Friends is Bove’s first and most famous book, and it begins simply, although unusually, enough: “When I wake up, my mouth is open. My teeth are furry: it would be better to brush them in the evening, but I am never brave enough.” Victor Baton is speak- ing, and he is a classic little man, of no talent or distinction or importance and with no illusions that he has any of those things, either; in fact, if he is exceptional, it is that life’s most basic transactions seem to confound him more than they do the rest of us. All Victor wants is to be loved, all he wants is a friend, and as he strays through the streets of Paris in search of them we laugh both at Victor’s meekness and his odd pride, but we feel with him, too. Victor is after all a kind of everyman, the indomitable knight of human fragility. And, in spite of everything, he, or at least his creator, is some kind of genius, investing the backstreets and rented rooms of the city and the unsorted moments of daily life with a weird and unforgettable clarity.

Mod
The publication date has changed from March 26 to April 16.

Trevor, are these the books we receive for our subscriptions or do they publish more than one book a month?

Mod
They publish more than one per month. If you go to the Forthcoming folder, I have a thread there of the entire forthcoming calendar by date. It is usually two or three or four per month!

Do we know which titles we will receive each month?

Mod
I’m not sure if there is a master list, but I see that January is The Kindness of Strangers from that book’s page. February is Nothing But the Night. March is Max Havelaar. I thought this book was April, but I don’t see that that’s the case now.

Those are the only ones I can see at this point. Other than the books’ individual pages I don’t know where this information is available.

Mod
Publication date has changed again to May 7.

Mod
WndyJW wrote: "Do we know which titles we will receive each month?"

I would like it to be a surprise but the first three books, if you go look at their individual pages, are listed as being selected for a particular month. As Trevor stated only Jan, Feb and Mar are noted though.

Mod
I do try to post the selections, when I know them, on this thread:

I think I’d like it to be a surprise too, but thank you for keeping up the thread.