Mod
The Kindness of Strangers 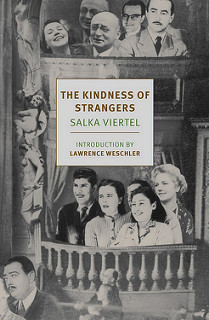 Salka Viertel’s autobiography tells of a brilliant, creative, and well-connected woman’s pilgrimage through the darkest years of the twentieth century, a journey that would take her from a remote province of the Austro-Hungarian Empire to Hollywood. The Kindness of Strangers is, to quote the New Yorker writer S. N. Behrman, “a very rich book. It provides a panorama of the dissolving civilizations of the twentieth century. In all of them the author lived at the apex of their culture and artistic aristocracies. Her childhood...is an entrancing idyll. In Berlin, in Prague, in Vienna, there appears Karl Kraus, Kafka, Rilke, Robert Musil, Schoenberg, Einstein, Alban Berg. There is the suffering and disruption of the First World War and the suffering and agony after it, which is described with such intimacy and vividness that you endure these terrible years with the author. Then comes the migration to Hollywood, where Salka’s house on Maybery Road becomes a kind of Pantheon for the gathered artists, musicians, and writers. It seems to me that no one has ever described Hollywood and the life of writers there with such verve.”

Mod
This book was released recently. I am moving it to the general discussion folder. I don't have a copy of it yet, but it looks interesting. Has anyone else tried it out?

It was my first book for 2019 subscription. I’m always interested in 20th century Europe (which made my disinterest in Berlin Alexanderplatz disappointing) so I’m excited about this book.

I’ve started Katalin Street, which I am loving, and will probably read The Kindness of Strangers next.

I just acquired a copy of this and am looking forward to slipping it into a strategic reading spot (what with challenges and all). One can never know too much history.