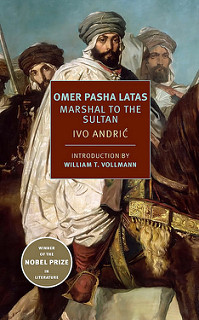 Omer Pasha Latas is set in nineteenth-century Sarajevo, where Muslims and Christians live in uneasy proximity while entertaining a common resentment of faraway Ottoman rule. Omer is the seraskier, commander in chief of the Sultan’s armies, and as the book begins he arrives from Istanbul, dispatched to bring Sarajevo’s landowners to heel, a task that he accomplishes with his usual ferocity and efficiency. And yet the seraskier’s expedition to Bosnia is a time of reckoning for him as well: he was born in the Balkans, a Serb and a subject of the Austro-Hungarian Empire, a bright boy who escaped his father’s financial disgrace by running away and converting to Islam. Now, at the height of his power, he heads an army of misfits, adventurers, and outcasts from across Europe and Asia, and yet wherever he goes he remains a stranger.

Ivo Andrić, who won the Nobel Prize in 1961, is a spellbinding storyteller and a magnificent stylist, and here, in his final novel, he surrounds his enigmatic central figure with many vivid and fascinating minor characters, lost souls and hopeless dreamers all, in a world that is slowly sliding towards disaster. Omer Pasha Latas combines the leisurely melancholy of Joseph Roth’s The Radetzky March with the stark fatalism of an old ballad.

Don't know how I missed this thread.

Read this several months ago. Loved it. Especially nice was the picture towards the front of the book. I've read Andric before, of course his Bridge on the Drina, so I wasn't quite sure what to expect with this one. Again, history-turned-fiction. This was a great read. I'd read history of the Balkans for many years, and the Janissaries are a particular interest of mine. This book did not disappoint. Loved it.

I wish I hadn’t read The Bridge on the Drina! The description of that poor guy on a spike haunts me to this day! Other than that it was a good book and this one interests me as well.

Me too! Nothing that descriptive in this book. ;)

Iron Mike wrote: "Me too! Nothing that descriptive in this book. ;)"

I’ve had my eye on this book so that’s good to know!

The Bridge on the Drina (other topics)