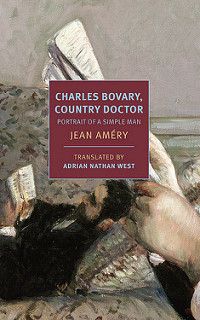 Charles Bovary, Country Doctor is one of the most unusual projects in twentieth-century literature: a novel-essay devoted to salvaging poor bungler Charles Bovary, the pathetic, laughable, cuckolded husband of Madame Bovary and the heartless creation of Gustave Flaubert. As a once-promising novelist who was tortured by the Nazis and survived a year in Auschwitz, author Jean Améry had a particular sympathy for the lived experience of vulnerability, affliction, and suffering, and in this book—available in English for the first time—he asserts the moral claims of Dr. Bovary. What results is a moving paean to the humanity of Charles Bovary and to the supreme value of love.

Mod
Will anyone be joining in on this discussion in August?

I will. I'll also just take the opportunity to say hello...I've been following without participating for a few months, but have finally managed to get a book in time to read it. I'm looking forward to joining discussions semi-regularly.

Mod
Welcome Emily! I am so glad that you will be joining us.

I will be joining in.

I finished the book in time to participate in the discussion this month!.

Mod
That is great Mirko and Sarah!

Mod
Today we start discussion on Charles Bovary, Country Doctor: Portrait of a Simple Man. I have to admit that I tried reading it, got about halfway through and simply could not go on. I can certainly understand its genius but essay type books simply do not appeal to me, and essay fiction is just odd, lol. But don't take my word for it. Those more knowledgeable than me have better things to say about it.

How lucky we are that this essay-novel of Jean Améry’s, circling around Flaubert’s tragically uxorious country doctor, poor dim Charles with his beating heart and ugly hat, is available to English readers now in a nimble translation by Adrian Nathan West. In his half-fictional monologue, half-philosophical tract, Améry interrogates literature and realism through his obsession with this side character in not just a novel but the novel. A meditation on failure and the loser to rival Thomas Bernhard’s.
—Kate Zambreno

Améry’s book, nimbly translated from the German by Adrian Nathan West, is a defense of both Charles Bovary and of the qualities that Flaubert is so keen to ridicule: moderation, decency, responsibility…there’s a satisfying feeling of delayed justice in this brief, thought-provoking book. All of us, fools that we are, should have such eloquent advocates.
—Sam Sacks, The Wall Street Journal

This strange but compelling book is at once a passionate critique and courageous reimagining of Gustave Flaubert’s masterpiece of psychological realism, Madame Bovary...Améry’s efforts to imaginatively inhabit Flaubert’s sensibility, and the resulting critique of his mean-spirited representation of Charles, make for fascinating reading...Améry’s daringly imaginative and moving book is a provocation to rethink much of what we thought we knew about one of the most important and widely discussed works of European literature.
—Doug Battersby, Financial Times

This is the first English translation of the work, which follows in the tradition of Jean Rhys’ Wide Sargasso Sea and John Gardner’s Grendel, stand-alone novels—not prequels or sequels—approaching a prior tale from a point of view more sympathetic to a major character than that taken in the original...readers will appreciate Améry’s valiant efforts to rehabilitate Charles Bovary and his conventional cohort in a work which is difficult to categorize and even harder to forget.
—Kirkus Reviews

Mod
About the author Jean Améry:

Jean Améry (1912–1978) was born Hans Meier in Vienna, Austria. He was a philosophy and literature student in Vienna and participated in the resistance against the Nazi occupation of Belgium. He was detained and imprisoned for several years in concentration camps, surviving Auschwitz and Buchenwald and finally Bergen-Belsen, until he was liberated in 1945. He settled in Belgium after the war and wrote several renowned works, including At the Mind’s Limits: Contemplations by a Survivor on Auschwitz and Its Realities (1966), On Aging (1968), and On Suicide: A Discourse on Voluntary Death (1976).

I made it through, but was distinctly underwhelmed. I'm also not a huge fan of essay, though for me what I liked best about the book was the novel/essay mashup style.

What I didn't like was the novel sections, which seemed quite a bland rehash of Madame Bovary itself, or the arguments, which were definitely made passionately, but not for me very convincingly.

I'm a bit at a loss as to why this is so well-regarded.

I’m sorry, but I won’t be joining in August. I can’t remember what September’s book is.

WndyJW wrote: "I’m sorry, but I won’t be joining in August. I can’t remember what September’s book is."

Just finished reading Charles Bovary, Country Doctor, and although it took me a bit to get into the book, I ended up liking it more than I thought I would. There were parts of the book (in particular the latter parts) that brought memories back from At Swim-Two-Birds written by Flann O'Brian, in which characters turn against their creator. Albeit in a difference vein, Charles Bovary had a bone to pick with Gustave Flaubert about the way the author portrayed him in Madame Bovary. Not having read Madame Bovary, it took me a while to connect the threads running throughout the essays. I wonder if I would have read Madame Bovary prior to reading this novel, whether I would have enjoyed or perhaps appreciated it more. Jean Amery seems to take for granted that the reader has an understanding of Madame Bovary's relationship to her husband and the events that took place.

I did read Madame Bovary in preparation for reading this, figuring it was long overdue anyway.

If anything it actually decreased my enjoyment of Améry's book, probably because I had the original so fresh, and because I loved the translation I read so much (by Adam Thorpe, which included some of his notes) that I felt more inclined to nitpick the arguments in this book.

For example, I felt that Flaubert was fairly sympathetic to Charles. Not precisely admiring, no, but sympathetic.

It's interesting that you came away with a different picture of how Flaubert treated Charles Bovary, than Jean Amery's portrayal of it. Amery's experience during the Second World War, does seem to have made an impact on how much Amery identified with Charles's story - re-reading the summary, it seems that perhaps Amery focused inadvertently too much on the vulnerability and loss that the character experienced.

Thinking about Amery's aims, it seems that they have been a bit lost as he switches between novel and literary criticism - Amery does bring the strands together but I wonder if a longer discussion on Charles Bovary himself, his view of the world after Madame Bovary passes, would have provided a stronger base on which to build his criticism of Flaubert's portrayal of Bovary.

I ended up really liking this book. I liked the fact that it alternated between Charles’ complaining about how he comes off as one of literature’s biggest losers for all time and totally resenting it and literary criticism of Flaubert and his work. It took me a while to get in the groove but I was laughing out loud by the last chapter. I think the premise is very clever to have a character chew out his creator. Telling him for being one of the titans of realism he really didn’t “get him” at all. So how was that realism.

I do think it is definitely is richer if you are familiar with Madame Bovary. But it has been a very long time since I read that book and my understanding of it has changed over a lifetime. Time for a reread for sure.

I have also read a couple of biographies of Flaubert which certainly added to my understanding of what Amery was trying to do.

I do remember feeling sorry for Charles Bovary in Madame Bovary but Amery’s Charles is a bit creepier but has quite the spine.

The alternating chapters are also something that was working for me. It kept me engaged. About the time Charles got repetitive or or too weird with his necrophilia fantasies Amery would switch to talking about Flaubert, his writing and influences from his life.

For me anyway it was a very satisfying and unique short read.

Thanks, Mirko. I won’t be reading along in September also. I will check in though!

II’m pretty sure I was in college when I read Madame Bovary and remember finding Emma annoying and shallow and not realizing until MUCH later that I was supposed to. That was the point. But since that time I have read a couple of biographies of Flaubert and so Amery’s book pulled together a lot of those threads for me. The fact that Amery’s Charles is a fresh perspective and he has hitherto unrealized depths is pretty cool. This reminds me of the old truism “ History is written by the winners”. And also whenever my husband hears someone beating up on a book he always mutters “write your own damn book” if you can do so much better. And while he sure didn’t rewrite Madame Bovary I think he did an admirable job of fleshing out the character he thought got short shrift.

After reading the comments, I will mosey my way to the bookstore and get me a copy of Madame Bovary tomorrow. I'm thinking that I need to read it sooner rather than later as I want Amery's work to be still fresh in my mind. :)

That Awful Mess on the Via Merulana (other topics)