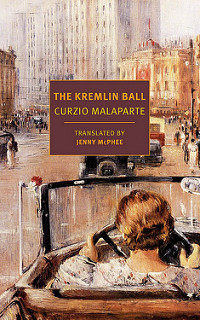 Publication Date: April 10, 2018
Pages: 240
Translated from the Italian and with a foreword by Jenny McPhee

Perhaps only the impeccably perverse imagination of Curzio Malaparte could have conceived of The Kremlin Ball, which might be described as Proust in the corridors of Soviet power. The book is set at the end of the 1920s, when the Great Terror may have been nothing more than a twinkle in Stalin’s eye, but when the revolution was accompanied by a growing sense of doom. In Malaparte’s vision it is from his nightly opera box, rather than the Kremlin, that Stalin surveys Soviet high society, its scandals and amours and intrigues among beauties and bureaucrats, including the legendary ballerina Marina Semyonova and Olga Kameneva, a sister of the exiled Trotsky, who though a powerful politician is so consumed by dread that everywhere she goes she gives off the smell of rotting meat. This extraordinary court chronicle of Communist life (for which Malaparte also contemplated the title God Is a Killer) was published posthumously and appears now in English for the first time.

Adding this to my list. I've seen the painting that is the cover art in Moscow, IIRC in the Tretyakov. Absolutely beautiful.