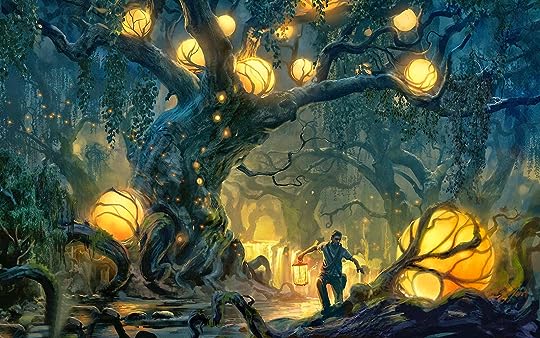 ⠀⠀A small, girlish figure walked through the Lantern Forest. She was careful to watch her stepping, as the place was littered with roots from the surrounding trees that stuck out from the ground. The trees were kind of creepy looking, and really old. On top of which, the whole place was lit up with giant lights that represented lanterns. Hence the name, Lantern Forest. There was no visible path, it was kind of a hit or miss situation. Therefore, the assassin was careful with where she went and made sure to make note of any surrounding landmarks. They would have to get back out somehow, right? Kikyo wasn't alone on this journey, in fact, a comrade was beside her - Nisha Azar. The two royal assassin had been asked to perform a mission that involved this mysterious forest.

As an assassin, Kikyo was confused when she was first asked of this task. To her dismay, it didn't involve anything to do with killing off anybody. In fact, all it was, was to find some kind of "special" item for the kingdom that can only be obtained here. She still wondered why they couldn't just go and send off some other group to get this thing. Again, it's not like she had anything better to do. So, the pink-haired girl continued to walk, her familiar black cloak was wrapped around her shoulders and fastened at the chest. Underneath, she wore her outfit of combat in case anything went south here. If anything, she would be glad to get some kind of battle in, it had been awhile since she last split some blood.

The journey the two shared was pretty quiet, as neither of them were really talkers. Not that Kikyo was complaining, she actually quite enjoyed it. Glancing over at the other girl, "See anything?" she asked, her voice gentle as she spoke. She was careful not to raise her voice, as anything could be prowling the area.

Nisha had always wanted to go to the Lantern forest, so when she heard where the mission was, after being dissapointed that it wasn't more exciting, she dwelled in the fact that they were going to the Lantern forest. She'd heard stories of the forest....the bright lights illuminating the dark twisting trees, and the creatures that dwelled inside the forest, unlike any other. She was enjoying this more than she thought she would have for she was used to missions sneaking around in the dark of a noble's mansion or tracking a troublesome merchant through the an open-air market.

When Nisha and Kikyo had been called to hear of the task, they were only given enough information to have a brief idea of what the item looked like and where and who would have it. Very few people lived in the Lantern forest, but apparently someone who lived quite close to the middle of the forest had been safe-guarding the object for the royal family. It had been locked away in a small box, and there was only one key, likely held by the false king. It was strangely quiet, yet you could feel something moving around them. The whole forest was haunting and although Nisha was enjoying it, it also sent a shiver of fear down her spine, for no one really knew what was out there.

Nisha didn't know Kikyo that well, but she respected her and treated her as an equal, as she should. She glanced around, the feeling of some other presence growing, but she shrugged it off for a moment, though it kept nagging her. "No. But that doesn't mean there isn't something" she replied in a hushed tone. "However, I think we're getting close as we've been walking in the right direction for a good while" she pondered out loud, their voices the only sound as their footsteps and the forest were soundless.