TUESDAY – A STITCH IN TIME, Part 2

Quilting is a theme, a metaphor, and an actual object in THE RIVER BY STARLIGHT. The night Annie agrees to marry Adam, the starlit sky inspires her to recall the journal writings of Henry David Thoreau on such a night, and inspires her to capture it in a quilt as a wedding gift. I’m often asked, was the quilt real? The answer lies at the intersection of research, writing, and imagination. This is excerpted from an interview for Nancy Bekofske’s wonderful blog, The Literate Quilter:

LT: The quilt Annie makes Adam is a symbol of their connection and shared life. Please talk about how the quilt came into the story.

EN: This question goes right to the intersection between writing fiction and drawing from true story. You have lots of facts and lots of gaps to fill. I don’t know how the quilt came into the story; it just did. I researched extensively about the places and times in which Annie and Adam lived. Piecing insights, information, intuition, and imagination together—like a quilt—I constructed their world. The quilt grew out of that, becoming a symbol of their intimacy (Annie won’t let anyone other than Adam see the quilt), a stark representation of gender disparity (the quilt exerts a different kind of power over each of them), and ultimately, the quilt becomes a standard bearer for resilience and hope.

Annie’s quilt isn’t the only one in the book. We learn that as a young girl, Annie was dismayed by the traditional wedding quilt made for her sister by friends—the neutral colors and strict symmetry of the tree pattern defied what Annie already knew to be true of life’s uneven trajectory. Her own vibrant quilt would be her counterpoint to that. Later in the book she encounters a very old quilt which also carries a message she needs to hear but almost misses. We also learn that she made her brother a quilt, “no-nonsense patchwork of duck cloth, corduroy, and denim” heavy enough to “keep her in her place” when she uses it after he leaves it behind.

LT: There are detailed descriptions of the fabrics Annie chooses which are correct to their time. Did you research quilting in the early 1900s?

EN: Yes. The fabrics and colors described are authentic to the day, as are the descriptions of the traditional patterns Annie rejected. Annie’s River by Starlight quilt, is free-form, which didn’t become popular until perhaps the 1970s. In fiction, the writer can explore beyond the confines of what is actual, to what is plausible. It felt plausible to me that Annie would have come up with her own design, depicting a moment that would define the rest of her life, and that the quilt she conceived for a wholly unexpected turn of events would be somewhat daring.

Mod
My mother quilted, and I have very fond memories of watching TV with her (like The Carol Burnett Show) while she half watched and half quilted. (I was probably on my stomach in front of the television glued to the program.) My mother-in-law also quilts; beautiful quilts that she designs herself (she has an amazing talent for color), pins, and then sends out for the actual stitching.

In my novel The Underground River, my character May Bedloe is a seamstress, though she doesn't quilt. I had to get sewing lessons in order to write about her. I sat in my living room with a wonderful woman who showed me how to make a costume ruff.

Did you do any quilting yourself, as part of your research or otherwise?

I did enough research on late 19th-early 20th century quilting that a number of high-level quilters have told me that the quilt patterns and fabrics described in the book come off as period authentic. I don't quilt myself, but I do sew, and I was indeed envious of May's skills in TUR. I did do all the knitting in the The River by Starlight, including Annie's stunning Shetland Stonington shawl and her bridal shawl, photos of which appear in today's AHN Facebook post. (If there's a way to post photos here, I haven't figured it out yet.)

Mod
I have this idea, seeing my mother-in-law at work, that the design itself is the most important part, perhaps because she doesn't do the actual stitching. I'm so impressed that you knit Annie's shawls! The most I knit was a couple of doll shawls when I was ten. My mother cast on and cast off for me. :)

Mod
This is a test for inserting images into a Goodreads post: 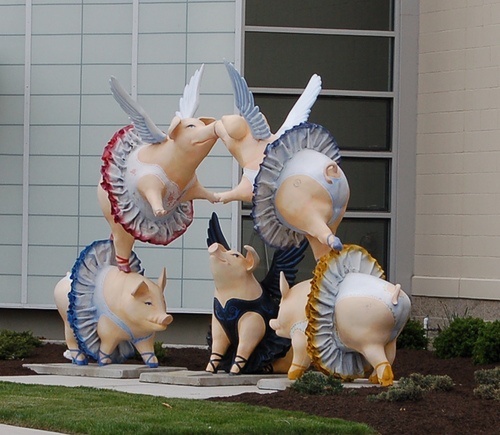 Mod
My grandmother quilted-- so gorgeous! I am very impressed with your picture, Ellen!

Mod
I can't believe you got sewing lessons to write about it! dedication!
>

Martha wrote: "This is a test for inserting images into a Goodreads post:

It worked! So tell us how.

Martha wrote: "I have this idea, seeing my mother-in-law at work, that the design itself is the most important part, perhaps because she doesn't do the actual stitching. I'm so impressed that you knit Annie's sha..."

I know quilters who have professionals do the quilting, and other who do it themselves. Machine quilt or hand quilt--that is the question! I can easily see how different parts of the process appeal to different types of artist. My grandmother and mother were knitters, albeit many levels of skill above me. I can say I've been knitting for more than 50 years, but it's more like 10 years of experience five times.