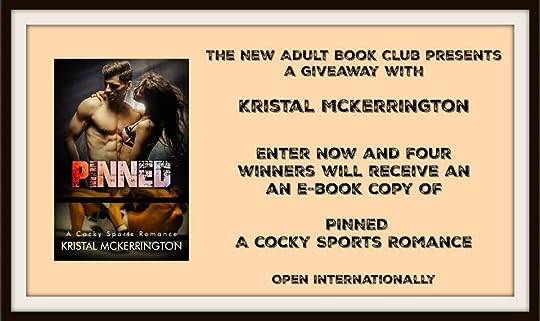 This week we have the very talented and very lovely Kristal McKerrington is with us all week. Kristal is giving away 4 E-Copies of Pinned! This Giveaway is OPEN INTERNATIONALLY! 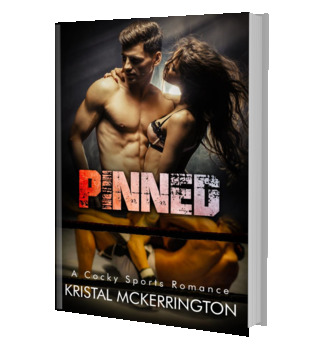 When Scottish Athlete, Alexander “Freakshow” McDade travels to the States for the first time in his career, he meets Carrie, a shy, do-gooder with a perfect figure and an annoying way of always being right.

Oh, and did I forget to mention that she was now assigned to him from the World Wide Wrestling Federation as his new agent?

They butt heads more than once over his career, and they verbal box better than anyone in the business.

And Alex won’t stop with the flirting.

He won’t stop talking about sex, orgasms, or the thrills that he wants to give her late at night. And he won’t stop speaking in that oh-so-sexy Scottish brogue.

She just has to remind herself that she wasn’t interested in the brand of loving that he had to offer.

In her experience, they’re arrogant, chauvinistic and childlike. And this particular one seemed to get under her skin more than any before.

Oh, but he was so sexy, and he had abs that she wanted to lick for days. How could anyone that cocky be that damned perfect?

Carrie’s never been much of a fighter, but with Alex, she enjoys the verbal sparring… She couldn’t help but wonder how he’d compare in the bedroom.

How could wrestling in the sheets be a bad thing?

I would love to have Alex as my own heh, but thank you for the chance of reading a book with sports not always explored and a comedy which would be remembered for a long time.

Am delighted to have all you reading Pinned. Do you have any questions for me?

Not entering because I read it, you guys are going to love Alex! I had a love/hate thing going on with him but he redeemed himself

I'd love to read this

Would love to read it 😍

THIS GIVEAWAY IS NOW CLOSED! THE LUCKY WINNERS ARE:

ALL THE WINNERS HAVE BEEN EMAILED AND NOW HAVE 48 HOURS TO REPLY DIRECTLY TO THEIR EMAIL AND CLAIM THEIR PRIZE OR A NEW WINNER WILL BE SELECTED AT RANDOM!

Thank you so much for the chance. I feel so lucky to have won. Thank you again ms Mckerrington.