This topic is about Ka
96 views
Ka:Dar Oakley in the Ruin of Ymr > Ka: Animal POVs and bird knowledge

Ok, I reached halfway point and just want to quickly address these:

1. Animal POV. I love the voice of Dar Oakley.

It is also my first CROWley book so I don't know whether his other novels have similar poetic quality in the prose or something.

Last time I read a good animal POV was Children of Time but this one tops that.

2. I learned a lot about birds from this book. It made me googled stuff like the differences between crows, ravens and rooks as well as terns and skuas.

If you love animals I think you'll love this book.

When I first moved to New Hampshire I quickly encountered the Northern Raven, which I had never heard of before, despite having a couple bird fanciers in my family.

A Northern Raven is basically a giant crow. They are the size of large hawks and smarter than the already-intelligent crows. They were able to figure out how to get into the trash cans, and strong enough to pull it off. They always have a contingent of crows following them around, like a king and his retinue of knights, and at first I mistakenly thought I was seeing a mother with her babies. Not only that but they are clearly working in concert with the local coyotes, acting as spotters. I wouldn’t have believed it if I hadn’t seen their coordinated efforts with my own eyes.

These are the ravens Odin speaks of, it turns out, and after seeing how these genius mastermind badasses operate in real life, I can see where all this mythology comes from.

Also:
- no crows in South America
- the genus Latin name is Corvus
- Bran means raven
- Crows are among the most intelligent animals with relative brain ratio equal to that of many non-human primates
- In Indonesia there are at least six crow species, including one in blueish violet plumage

As for myths, there are lots to talk about those! Maybe in another thread.

Also:
- no crows in South America
- the genus Latin name is Corvus
- Bran means raven
- Crows are among the most intelligent animals with relative brain ratio equal to..."

As an additional aside Bertram means shining raven... :-)

Mod
Silvana wrote: "Crows are among the most intelligent animals."

except the ones from Adelaide ;-)

Silvana wrote: "Crows are among the most intelligent animals with relative brain ratio equal to that of many non-human primates"

Someone, possibly paleoartist C.M. Kosemen (I can’t find the reference right now), has speculated that if dinosaurs had developed human-level intelligence they wouldn’t have looked like lizardmen but rather more like birdmen. So less like Sleestak and more like Skeksis.

Edit: it was paleontologist Darren Naish whomproposed that, the art done by Kosemen. Article here, with drawing of the avian-style intelligent dino at the bottom: http://darrennaish.blogspot.com/2006/...

Trike wrote: "When I first moved to New Hampshire I quickly encountered the Northern Raven, which I had never heard of before, despite having a couple bird fanciers in my family. ..."

Mind of the Raven: Investigations and Adventures with Wolf-Birds is a fascinating book on ravens and raven society. It's one of my all time favorite reads.

Here at least ravens and crows don't mix. The ravens are paired up and tend to stick to their home territory. We have a pair that comes by daily. The crows in this area (a smaller variant known as the Northwestern Crow) usually travel in rowdy groups and harass larger birds. That includes ravens, owls, and eagles. That latter is a particularly bad idea. We sometimes find pieces of crow around the eagle nest here. Sometimes even smart birds do dumb things.

Trike wrote: " Not only that but they are clearly working in concert with the local coyotes, acting as spotters...."
Over here in the UK, ravens are rare - sadly! We have them in the Tower of London, and in some really wild areas particularly in the north, but otherwise rather few - so I can only talk about crows.
Now this is where Trike's comment interested me. Relationships between corvids and canids are complex, and usually not so amicable - but are interesting. Charles de Lint has commented on this in some of is books!

A few years ago my wife and I had a GSD and a Bernese Mountain Dog - 50+Kg of spectacular bouncy stupidity. While out walking, the crows would often tease him. On some occasions this would go on for considerable lengths of time! The crow (or crows, but generally only one or two at a time) would settle on the ground some distance ahead of the dogs and 'caw' until they took notice. Dogs chase half-heartedly, crow(s) fly up, fly around, come back behind the dogs and buzz them - flying along the dog's back at about three inches height, touch as they pass between the ears. Dogs furious, chase crows, which settle on goal posts, in full view but out of reach. Dogs vent wrath, then give up. As soon as they are facing away, crows fly along dog's back, brush its head as they pass between the ears . . .
Repeat many times. In extreme cases, dogs come to heel for human protection!

This popped up on Facebook this morning. #synchronicity #dadjoke 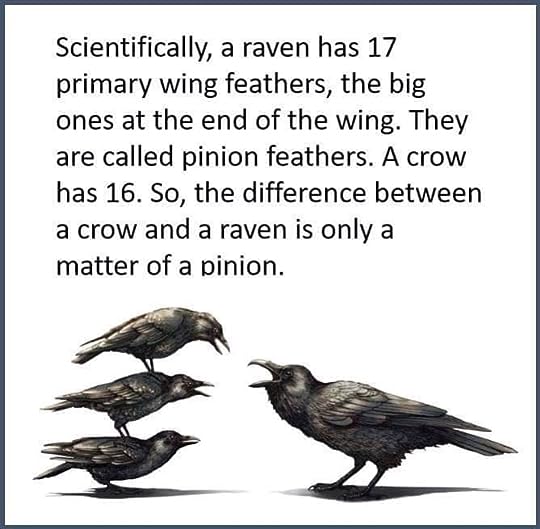 Alan, what a great story!

I want to hear more stories about crows :)

Books Crowley used for his research:
In the Company of Crows and Ravens
Ravens in Winter
Mind of the Raven: Investigations and Adventures with Wolf-Birds (already mentioned above)

One of my favorite crow videos from a few years ago shows a crow sledding down a snowy roof. Looks like a bottle lid or something. On his second try it even appears as if it’s trying to get as far as the first attempt by using its beak to push.

Crows just rolling on snowy cars, like ya do.

Another great (non-fiction) book about crows and other corvids is Crow Country by Mark Cocker. It has some of the evocative lyrical tone of Ka and is about one man's bid to understand the crow colonies of the UK. It starts with a beautiful description of a huge corvid roost in Norfolk (for those who don't know the UK at all, this is in the Easternmost part of England, an area of predominantly fields and wetlands noted for being very rural and picturesque. And maybe a bit behind-the-times).

Tumblr is the most wonderful hellsite.

Whoa crows are getting cooler every day. 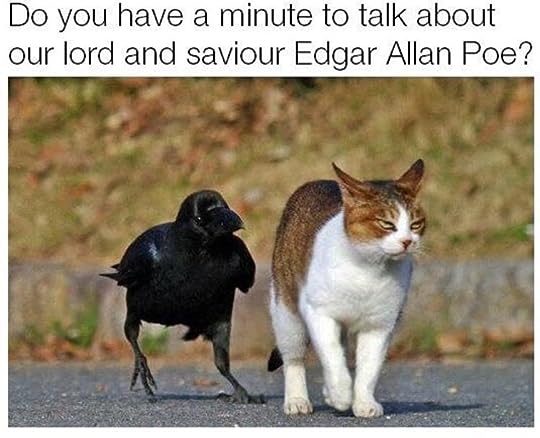 Hahaha! That is a perfect picture.