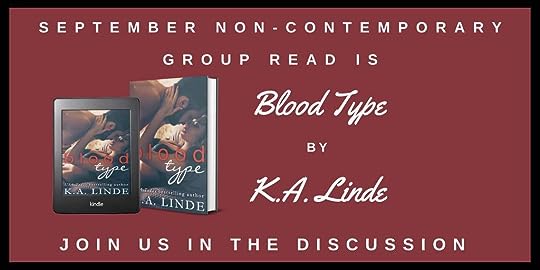 Synopsis
A startling new vision of paranormal romance: When a human ventures into the world of vampires—a decadent milieu of blood-bonds and betrayal—she discovers that not all is what it seems.

For Reyna Carpenter, giving up her body isn’t a choice. It’s survival.

In a civilization laid waste by poverty and desperation, Reyna accepts a high-paying position with the wealthy and hungry vampire elite. Her new job is as the live-in blood escort for the intimidating, demanding, and devilishly handsome Beckham Anderson. He’s everything she expected from a vampire, except for one thing—he won’t feed off her.

Reyna soon discovers that behind Beckham’s brooding, wicked façade lies a unique and complex man. And that, in a dark and divided world, she is more valuable than she ever would have believed.

For with each passing night, Reyna can’t shake the sensation that it’s Beckham who’s afraid of her.

I'm gonna start reading it tomorrow and I cannot wait!! Who's joining me?

This whole series is amazing. I got the first as an ARC on netgalley a month before its release and I just became so enamored with the whole series, but this one especially. It sucks you right in. I love the characters, the world, and the whole concept of the story.

Reading this as we speak!

Bianka wrote: "Reading this as we speak!"

I’m with you Bianka, starting it right now!

I've just finished reading Blood Type and I LOVED it!!
I don't usually read many PNR stories, but this one is really good and well written and entertaining!
I was enthralled from the beginning till the end and now I cannot wait to read the second book in the series.

At first I was enthralled with this book. The universe was such a unique and interesting concept. It still is. However, the relationship between Reyna and Beckham kind of ruined it for me. He verbally and emotionally abused her, and once Reyna finally stopped putting up with it and left the situation, he suddenly confesses that he's loved her the "whole time". I call bullshit. I understand that Reyna is in a dangerous world and that compared to the other vampires Beckham is a saint, but greater abuse does not excuse lesser abuse. I don't think I'll be reading the next book.