WHAT IS A CAMERA OBSCURA?

If you go into a dark room on a sunny day and make a tiny hole in a window, you’ll see a strange effect on the opposite wall – the world outside the window will be shown upside down.

This is because light travels in a straight line. When some of the rays reflected from a bright subject pass through a small hole in thin material, they reform as an upside down on a surface parallel to the hole

Chinese philosopher Mo-Ti is thought to be the first person to mention this phenomenon in the 5th century BC. In 13th-century England, Roger Bacon described the use of a camera obscure for the safe observation of solar eclipses. In 1490 Leonardo Da Vinci gave two clear descriptions of the camera obscura in his notebooks.

Natural optical phenomenon that occurs when an image of a scene at the other side of a screen (or for instance a wall) is projected through a small hole in that screen as a reversed and inverted image (left to right and upside down) on a surface opposite to the opening. The surroundings of the projected image have to be relatively dark for the image to be clear, so many historical camera obscura experiments were performed in dark rooms.

The term "camera obscura" also refers to constructions or devices that make use of the principle within a box, tent or room. Camerae obscurae with a lens in the opening have been used since the second half of the 16th century and became popular as an aid for drawing and painting. The camera obscura box was developed further into the photographic camera in the first half of the 19th century when camera obscura boxes were used to expose light-sensitive materials to the projected image.

The camera obscura was used as a means to study eclipses, without the risk of damaging the eyes by looking into the sun directly. As a drawing aid, the camera obscura allowed tracing the projected image to produce a highly accurate representation, especially appreciated as an easy way to achieve a proper graphical perpspective.

Before the term "camera obscura" was first used in 1604, many other expressions were used including "cubiculum obscurum", "cubiculum tenebricosum", "conclave obscurum" and "locus obscurus".

A camera obscura device without a lens but with a very small hole is sometimes referred to as a "pinhole camera", although this more often refers to simple (home-made) lens-less cameras in which photographic film or photographic paper is used.

How to Make a Camera Obscura

The camera obscura was the predecessor of the photographic camera, but without the light-sensitive film or plate. It is well established that in the 18th century some other famous painters employed the device, the best-known being Canaletto, whose own camera obscura survives in the Correr Museum in Venice. The English portrait painter Sir Joshua Reynolds owned a camera; and the device was widely used by landscape artists, both professional and amateur, up until the invention of chemical photography in the 1830s.

The term 'camera obscura' means 'dark chamber', because the instrument up until the 16th century typically took the form of a closed room, the windows shuttered, with a small hole in a blind or door. Light entering the room through the hole then cast an image onto a screen or onto the wall opposite the door. One problem is that the image in such a 'pinhole' camera, even of a sunlit summer landscape, is very dim. The one object that is clearly visible is the sun itself. Indeed this remained the only real application of the camera up until the 1550s: for astronomers to make solar observations without damaging their eyes. The first published illustration of a camera (of this or any type), is in a book from 1545, by the Dutch mathematician and astronomer Gemma Frisius. It shows an eclipse observed by Gemma Frisius at Louvain in the previous year.

The situation changed in the mid-16th century, when it occurred to a number of people, it seems simultaneously, to substitute glass lenses for simple pinholes. Typically these were convex lenses of the kind then in wide use for the correction of long sight. Two Venetian authors, for example, give clear descriptions of cameras with convex lenses - Daniele Barbaro in 1568 in a perspective manual for architects and painters, and GB Benedetti in a mathematical text of 1585. These authors describe how to draw from the camera image by tracing outlines onto the paper screen. Others even hint at the possibility of laying down colours over the projected image, although this idea is problematic. (How could you see the colours of your paints in the darkness of the closed room?)

An image of a cubicle-type camera, with a lens, was published in The Great Art of Light and Shadow by the Jesuit polymath Athanasius Kircher in 1646. It is a rather eccentric diagram, but the principle is sound enough. In this design the image is projected onto a translucent screen, made perhaps of oiled paper or ground glass, and the artist looks at it on the far side of the screen, away from the scene - an arrangement first suggested by Leonardo da Vinci. This has the advantage that the user does not get in the way of the light.

A few people have made incredible fotos recently using this principle, especially Abelardo Morell, a Cuban-American professor of photography at the Massachusetts College of Art. Abe has several books out on his photogaphy. As I find it impossible to mount any of his fotos on the html vehicle, I will leave it to another.

Never heard of him, but a quick look on Google gave me these results, are they what you meant?
These rooms must be pretty impressive if you can see them in reality... 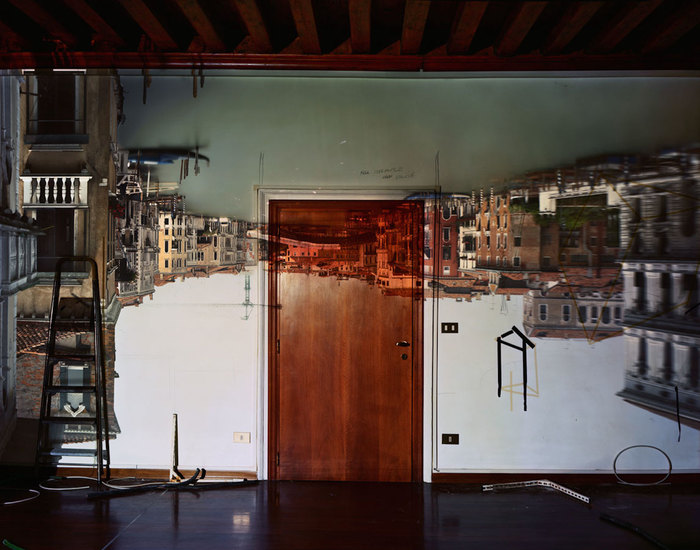 Yup, those are them and him. thanks.

All I can say is WOW! Thank you for introducing these, Geoffrey and for posting them, Dirk!