Mystery of Vermeer's masterpieces solved: Dutch master DID use mirrors and projections to create ultra-realistic paintings
By Victoria Woollaston

-Johannes Vermeer was renowned for his realistic 17th century paintings

Dutch artist Johannes Vermeer was revered for his strikingly realistic 17th century paintings because they were able to capture light and detail like never before.

Yet in 2006 fellow artist David Hockney stirred up controversy by claiming Vermeer was only able to paint this well because he used a lens and mirror contraption – similar to a camera obscura.

Since then art critics have come out in support of both Vermeer and Hockney, but one inventor now claims to have finally solved the mystery – and he is 95 per cent sure Hockney’s theories are correct. 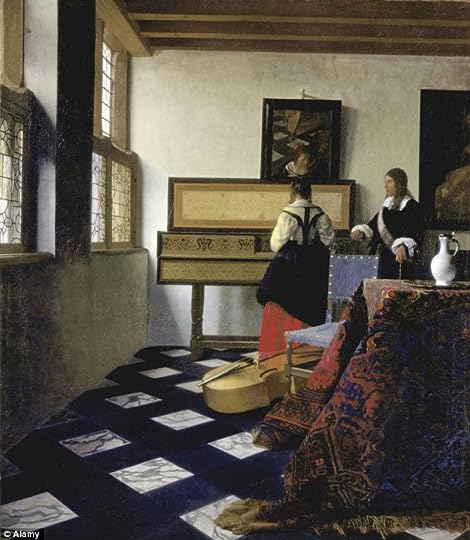 Inventor Tim Jenison, 58, was given Hockney’s book Secret Knowledge: Rediscovering the Lost Techniques of the Old Masters by his daughter in 2002, according to a report in Vanity Fair.

Jenison claimed he had a hunch that what Hockney was saying about Vermeer was true and then one day while in the bath, he realised that the images could be created by projecting the subject through a lens onto a mirror that would have been positioned in Vermeer’s line of sight.

The Texas-born production editor then traveled to Amsterdam to look at Vermeer’s work, studied the locations where Vermeer painted in his hometown of Delft, and learned to read Dutch.

'Looking at their Vermeers,' he said 'I had an epiphany.'

'The photographic tone is what jumped out at me. Why was Vermeer so realistic? Because he got the (colour) values right.'

Jenison also tested out various contraptions to discover which was the most likely. 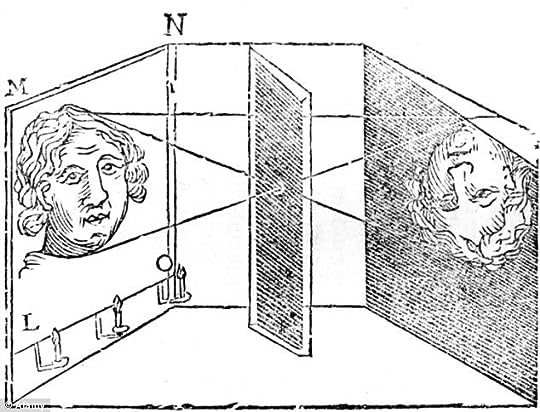 A camera obscura is based on the principle that when some of the rays reflected from a bright subject pass through a small hole in thin material, they reform as an upside down on a surface parallel to the hole. In 2006 artist David Hockney accused Vermeer of using a contraption similar to this

One of the strongest counterarguments against Hockney’s claims was that if Vermeer had used a camera obscura, the image would have been upside down, but Jenison discovered that using a second mirror solved this problem.

His final design, which Jenison claims he is 95 per cent sure would have been how Vermeer would had painted his masterpieces, involves two mirrors and a four-inch lens.

The image is projected through the lens onto a 7-inch concave mirror fixed to the wall opposite. This mirror bounces the image onto a smaller 2 x 4-inch mirror situated next to the canvas.

If Vermeer used this system, he would have been able to paint with little movement of his head and capture the light and detail more accurately. 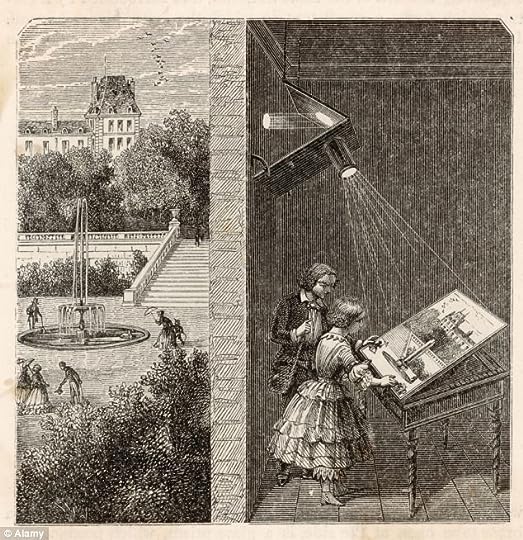 Early models of the camera obscura were large; comprising either a whole darkened room or a tent. By the 18th century, following developments by Robert Boyle and Robert Hooke, more easily portable models became available

To test his theory, Jenison has spent the past decade – a total of 220 hours - recreating the room Vermeer would have painted in and attempting to recreate his 1662 painting The Music Lesson.

He also made lenses that would have been made using 17th century techniques and only painted with pigments available in the late 1600s.

American illusionists Penn and Teller installed cameras in Jenison's studio to record everything.

Vermeer and the Camera Obscura
by Philip Steadman

Why have people imagined that Vermeer might have been a camera user? There is absolutely no documentary evidence to support this idea. The only source of information is the paintings themselves. The first person to make the suggestion, as long ago as 1891, was the American graphic artist Joseph Pennell, who pointed to what he called the 'photographic perspective' of Vermeer's Officer and Laughing Girl. The two figures sit very close across the corner of the table. But the image of the officer's head is about twice as wide as that of the smiling girl. The perspective is perfectly correct in a geometrical sense: the discrepancy arises because the viewpoint of the picture is close to the soldier. We are quite familiar today with foreground objects appearing very large in snapshots. But in 17th-century painting this is rather unusual, and Vermeer's contemporaries would have made human figures in a composition of this kind much more nearly equal in size. 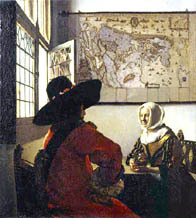 A second reason for suggesting that Vermeer used the camera obscura has to do with the maps that he shows hanging on the wall in a number of paintings. These are real maps, printed on sheets of paper that were pasted together onto canvas backings. The art historian James Welu has identified all of Vermeer's many maps and globes, and found surviving examples in museums and libraries. If you look at an actual copy of the map of Holland shown in Officer and Laughing Girl, it is immediately obvious that Vermeer has copied it extremely faithfully - but was this done through the use of a camera obscura? The instrument was used very widely in the 18th and 19th centuries - before photography - for copying prints and pictures, and for enlarging or reducing them - did Vermeer use one in the 17th century?

It should be acknowledged that Vermeer could have obtained his 'photographic perspective', and exact reproductions of the maps, by a number of methods other than tracing camera images. Scholars have however pointed to effects in Vermeer's canvases that seem to carry more distinctive marks of an optical way of working. For example, it is significant that there are several passages where Vermeer seems to paint in very soft focus, as in his little portrait of the Girl with a Red Hat.

Notice the sculpted lions' heads, which we know from other paintings are decorations on the backs of chairs. Vermeer has a very characteristic way of showing highlights on reflective surfaces like pottery, polished wood or - in this case - polished brass. In reality a highlight takes the shape of the light source that it reflects. Since Vermeer is painting indoors, the sources of light would be the windows; and so the resulting highlights would in reality be rectangular in shape, perhaps distorted into four-sided shapes with curved edges where they are formed on curved surfaces. Here, however, Vermeer has tended to paint the highlights on the lions' heads as true circles. It has been suggested that what he is doing is imitating accidental effects of slightly unfocussed optical images.

Girl with a Red Hat

What happens is that the lens spreads bright points of light into so-called circles of confusion. Such effects would not be seen by the naked eye. The art historian Charles Seymour and the photographer Henry Beville have tried to reproduce these effects, by photographing a similar decorative lion's head in a slightly unfocussed plate camera, with some convincing success. Several authors, including Seymour, have argued that Vermeer painted this and another tiny portrait, Girl with a Flute, using a box camera. The sizes of both pictures are of the order of size of a typical box camera's screen.

Girl with a Flute

The present author published new evidence of a different kind in Vermeer's Camera, in 2001. The book describes an analysis of the three-dimensional geometry of the rooms depicted in some of the Vermeer's paintings, made by - so to say - working the normal procedures of perspective drawing backwards. It turns out that ten of the artist's interiors show scenes set in what is, in architectural and geometrical terms, the same room. The scale can be determined with precision in every case from the real objects that Vermeer includes - not just the maps, but also the musical instruments, and two recognisable designs of chair (one of them the lion's head design), examples of which can be found today in Dutch museums. The position of the back wall of this room - behind us, the viewers, and behind Vermeer as he painted - can be fixed from its reflection in a mirror seen in The Music Lesson.

The precise position of Vermeer's viewpoint can be determined for each of the ten paintings. Everything that is visible in one painting must be contained within a 'visual pyramid' - a pyramid on its side - whose apex is at the painting's viewpoint. It is possible to determine the positions of the sloping lines that form the edges of this pyramid. Suppose that these lines are continued back, through the viewpoint, to meet the back wall of the room. They define a rectangular area on that wall. The book's key finding is that, in at least half a dozen cases, this rectangle is precisely the same size as the corresponding painting.

Plan of Vermeer's room, showing his viewpoints and angles of view

This very curious result can hardly be due to chance. The interpretation made in the book is that it is a consequence of Vermeer using a simple booth-type camera obscura, with which he projected optical images onto the back wall of his room. His canvases are the same size as these images, because he has traced them. These findings were made, as described, through a graphical analysis of the pictures' perspective geometry. They were also tested, in effect, via a second route, through the building of a reduced 1:6 scale model of the room, with which it was possible to make photographic simulations of several paintings, and investigate further questions of colour, light and shadow. The book has managed to win over many art historians, including some who were previously extremely sceptical about camera obscura theories. A small core of Vermeer specialists remains, however, to be convinced.

I just have a doubt, even if Vermeer used Camera Obscura..would he not have to actually paint it..?choose the colors and so?
If so,why is it made such an issue of?

As you see,I don't know much about art..

I couldn't agree with you more, seriously. What's the issue? Is this but a feeble attempt by some to lower the man's reputation?

Famous artist David Hockney partnered with a optical physicist to write a book about this very subject. Here’s an article about their thesis. https://en.m.wikipedia.org/wiki/Hockn...

I find it perfectly all right for an artist to use whatever tools he needs to get the effect he wants.

Was he just trying to come to a better understanding of thectools used to gain the level of Realism in the paintings then ?


I think, understand a bit more


In particular, it has spurred increased interest in the actual methods and techniques of artists among scientists and historians of science, as well as general historians and art historians. The latter have in general reacted unfavorably, interpreting the Hockney–Falco thesis as an accusation that the Old Masters "cheated" and intentionally obscured their methods.[3] Physicist David G. Stork and several co-authors have argued against the Hockney–Falco thesis from a technical standpoint.

So,he was just trying to determine the methods and techniques behind Realism...
It may or may not be accurate, but its a theory.Qn interesting one too.