Mod
Set in wartime, and published in 1943, this crime novel was said to be a favourite of Raymond Chandler.

Mr Bowling is getting away with murder. On each occasion he buys a newspaper to see whether anyone suspects him. But there is a war on, and the clues he leaves are going unnoticed. Which is a shame, because Mr Bowling is not a conventional serial killer: he wants to get caught so that his torment can end. How many more newspapers must he buy before the police finally catch up with him?

Donald Henderson was an actor and playwright who had also written novels as D. H. Landels, but with little success. While working for the BBC in London during the Second World War, his fortunes finally changed with Mr Bowling Buys a Newspaper, a darkly satirical portrayal of a murderer that was to be promoted enthusiastically by Raymond Chandler as his favourite detective novel. But even the author of The Big Sleep could not save it from oblivion: it has remained out of print for more than 60 years.

There is now a new edition by the Detective Club, which is introduced by award-winning novelist Martin Edwards, author of The Story of Classic Crime in 100 Books, who reveals new information about Henderson’s often troubled life and writing career. There is also a Black Heath Classic Crime edition available (at least in the UK).

Mod
Neither of our buddy reads this month is a traditional detective story - as you say, Susan, this one is much darker than a lot of GA, and indeed it comes after the real GA period, set in wartime, with mentions of the Blitz.

It certainly creates a dark atmosphere, with various things in short supply and rumours of more shortages to come. This is an inverted story where we follow the killer and wait to see if, and how, he will get caught. Because it is mainly seen through the eyes of Mr Bowling, this adds an extra layer of darkness and mocking commentary.

I tend to prefer slightly lighter mysteries but certainly found this one different and I think it should lead to an interesting discussion.

Who is reading this one, and what do you think?

Mod
I LOVED this book, although I will understand if others do not share my enthusiasm. I loved the whole, world weary atmosphere of the book. It reminded me a little of Patrick Hamilton, in tone.

I'm looking forward to this one, it certainly sounds unusual in its approach. I hope to start reading it next week.

Mod
Susan wrote: "I LOVED this book, although I will understand if others do not share my enthusiasm."

Mod
Just to add, I often do struggle a bit with inverted mysteries, as I prefer to see through the eyes of the detective rather than the killer - but the Nicholas Blake book A Penknife in My Heart was an exception to this for me, as I loved that one.

Mod
I am just so glad that so many authors/books are coming back into print. Mr Bowling was out of print for 60 years, apparently. It's great to have the chance to re-discover these lost gems.

Mod
Totally agree - it's great to be able to read these books from the past! And this one is certainly something different and unique.

I was so looking forward to this book, but was very disappointed . Bowling is a very depressed person, and as the story progressed I found I knew exactly where it was going. I didn't like the character and couldn't feel sorry for him

Mod
If anyone would like to read Martin Edwards' introduction to the book, it is included in the Google Books preview of the Detective Club edition:

It's interesting to learn more about Donald Henderson's life - he clearly had a very hard time, including being badly injured in the war and being homeless for a while, and then died young.

Mod
Yes, his lungs were damaged during the bombing and he died of lung cancer young, a few years later.

I was surprised that he had written so many books, although he never really found success until Mr Bowling. It was odd that most readers seemed to like the Campion, which I really didn't care for, but dislike this, which I loved! Still, I am pleased at least one of us loved this - I thought it was a brilliant depiction of wartime London, apart from anything else.

My copy finally arrived today! I hope to be joining the discussion soon.

Mod
Hurrah! I hope you like it, Suki. We've had quite mixed reactions, but I enjoyed it.

Apparently, despite the huge success of Mr Bowling, the publisher first released this as, "The Announcer - a Novel," which is not particularly inspiring, as well as using a pseudonym. Poor Mr Henderson was not well treated by his publishers, I don't think, as they should have capitalised upon his earlier success, as his US publishers did when it was released in the States.

I'm glad someone suggested this book in the group. I certainly had never heard of it, and doubt I would have stumbled across it.

I just finished it, and quite enjoyed it.

Mod
Hurrah! I just finished, "A Voice Like Velvet," but haven't written the review yet. However, I did enjoy it and I am so pleased that you liked his writing too, Valerie.

Susan wrote: "Hurrah! I just finished, "A Voice Like Velvet," but haven't written the review yet. However, I did enjoy it and I am so pleased that you liked his writing too, Valerie."

I thought that book looked interesting too.

Mod
Yes, I can see there is one more in print too Goodbye to Murder

I enjoyed reading your thoughts and comments - thanks so much

It's heady and compelling, and I recommend it

It's heady and compelling, and I recommend it 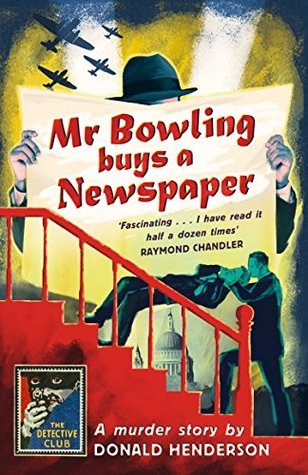 Mod
Good to see you over here, Nigeyb, and glad you enjoyed the book. Do you plan to read more by Donald Henderson?

Yes. When I bought Mr. Bowling Buys a Newspaper, I also bought a copy of Goodbye to Murder both were, and still are, a mere 99 pence on Kindle. I hope to read it quite soon.

Mod
Hi Nigeyb. Nice to have you visiting us :)