21 views
Talent of the Members > selfportrait

A couple of days ago Heather posted a photograph of Cindy Sherman in the thread Artist Self Portraits. Seeing this brought back some memories.

Long ago (Almost 40 yrs) when I was in my last year Graphic Arts I made a self-portrait in screen-print.

I didn’t particularly like screen-print, I always got a headache from the ink and & solvents.
So I spent most of the time doing Etchings and Lithography, which I preferred. Besides I had fallen in love at the beginning of the year with a pretty first-year student and spent much more time with her than was sensible. I think I only made a couple of watercolours those first months and maybe one or two etchings.
The last month of the year we had no more theoretical courses, so extra time to create a body of work that at the end of the period had to be presented to a jury. Needless to say, I got pretty busy working up to 15 hours a day to create enough art to pass. During these weeks I was confronted by our screen-print teacher, who told me that he had not seen me at any point during the year, which meant that I now had just a couple of weeks to make at least one screen-print to add my portfolio for the jury. If I did not do that, he would flunk me.
So I went home a bit troubled by this ultimatum.
But I came up with a pretty good idea, I had some photographic material in my home and a dark room, so I made an enlargement of a black and white photo of myself and exposed it through a rasterising filter I got from my father. But instead of putting the filter on the enlargement, I put it on the negative so I got these pretty big raster dots, a bit like when you look at a newspaper photo with a magnifying glass, but even bigger. I thought it looked really cool and took it to the screen print class the next day. The teacher liked the photo and helped me print it.
At that time there was a pretty famous graphic designer Lucien De Roeck at our school.

I was not one of his students, he taught commercial graphic arts and I was enrolled in free graphic arts. He strolled in the atelier when we were finishing my print and gave me the greatest compliment I received during all those years of school; he took one look at the print and sighed: “Now why can’t my students make something like this?”
It’s not surprising I was not flunked ;-) 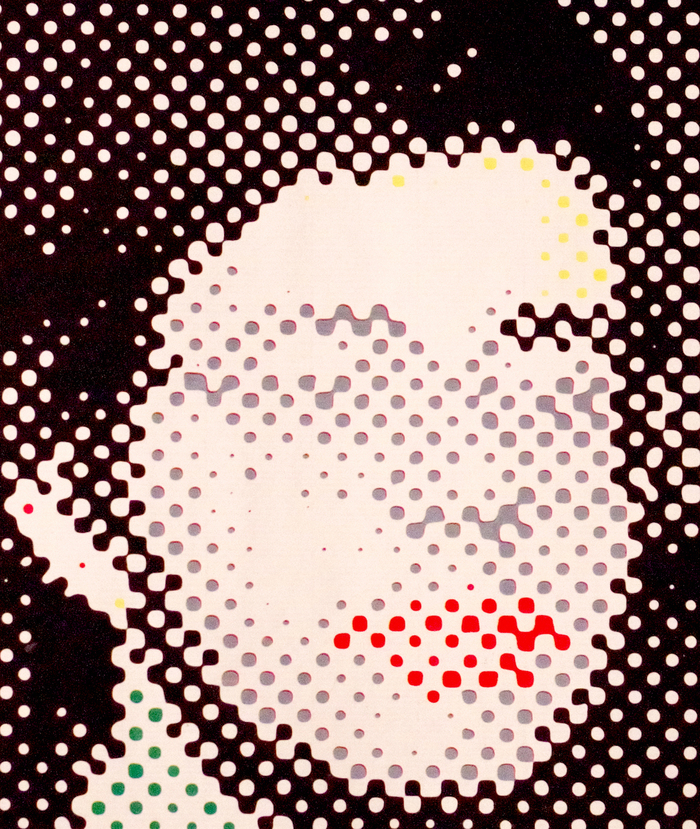 This is a detail of the print Which gives the impression of holding it in your hands.
From the moment we learned about modern printing processes I was fascinated by the visual illusion of the raster dots. It’s amazing how much detail your mind tricks you into seeing.

This is the whole work: approximately 40 by 30 cm. 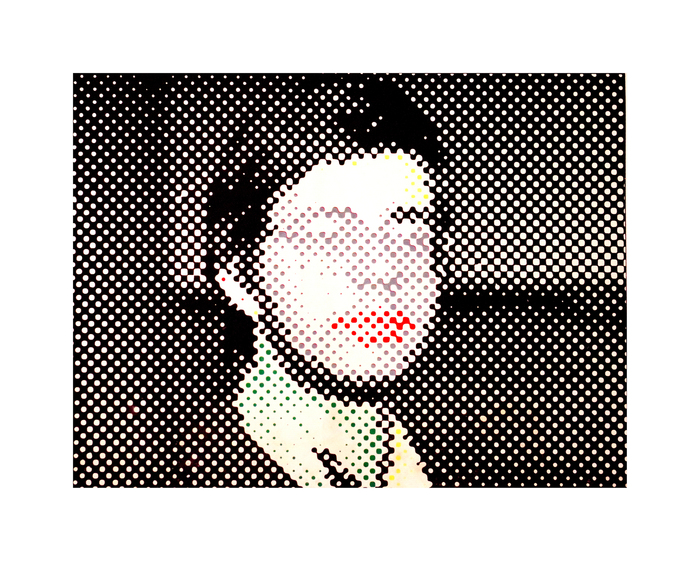 Dirk wrote: "A couple of days ago Heather posted a photograph of Cindy Sherman in the thread Artist Self Portraits. Seeing this brought back some memories.

That's awesome, Dirk! Wow, ingenuitive, genius! I love it! Thank you for sharing that, it's different, and it says something about you personally, too! (nothing bad!!!)

Thank you!
Well it is a selfportrait after all. Idon't look that much different now,
other glasses and mostly gray hair ;-)
I have a son now who's older than I was at the time of the pic.

At the time I was not so impressed with it myself, knowing I had the idea and made it in such a short time, even the printing was done in a couple of hours.
Still this print was the one from my portfolio to be chosen by the school board to feature in the permanent exhibition of works by graduated students for a whole year.
So that was something to be proud of I guess.
I must say I never made another sreenprint and I think it was also my last selfportrait.

That is definitely something to be proud of! Congratulations, Dirk!

Dirk wrote: "A couple of days ago Heather posted a photograph of Cindy Sherman in the thread Artist Self Portraits. Seeing this brought back some memories.

That is fabulous and thanks for sending me the link. I also did a little silk screen in college but have nothing of it now. I did a large Luna moth from one of my paintings. I am so glad you did not get flunked. There was a guy in my class and he did an amazing black and white painting of an old guy sitting in a rocker on the porch of an old country store and he got flunked. It was horrible. His work was better than anyone else but we had to do modern stuff. I took a couple of my paintings home and never showed them at critique after that horror.

I could tell so many more scary stories. I had to conform and conform some more!

I also got headaches and the worst thing was using oil paint with lots of terpentine in a sprayer and NO MASK! What were they thinking?

~☆~Autumn♥♥ wrote: "Dirk wrote: "A couple of days ago Heather posted a photograph of Cindy Sherman in the thread Artist Self Portraits. Seeing this brought back some memories.

I once took an unaccredited course at the university with their Experimental continuing program and had a similar experience. At the time I was fascinated with African art and did a small sculpture in that mode. The teacher kept correcting me and tried to push me into a modernist mode. I ended up leaving the class, never to return.