Mod
The roots of the Black Hand can be traced to the Kingdom of Naples as early as the 1750s. The English language term specifically refers to the organization established by Italian immigrants in the United States during the 1880s. A minority of the immigrants formed criminal syndicates, living alongside each other and largely victimizing fellow immigrants.

By 1900, Black Hand operations were firmly established in the Italian-American communities of major cities including New York, Philadelphia, Chicago, New Orleans, Scranton, San Francisco, Olean, NY, and Detroit. In 1907, a Black Hand headquarters was discovered in Hillsville, Pennsylvania, a village located a few miles west of New Castle, Pennsylvania. The Black Hand in Hillsville established a school designed to train members in the use of the stiletto. Although more successful immigrants were usually targeted, possibly as many as 90% of Italian immigrants and workmen in New York and other communities were threatened with extortion.

Typical Black Hand tactics involved sending a letter to a victim threatening bodily harm, kidnapping, arson, or murder. The letter demanded a specified amount of money to be delivered to a specific place. It was decorated with threatening symbols like a smoking gun, hangman's noose, skull, or knife dripping with blood or piercing a human heart, and was, in many instances, signed with a hand, "held up in the universal gesture of warning", imprinted or drawn in thick black ink.

Author/historian Mike Dash states "it was this last feature that inspired a journalist writing for The New York Herald to refer to the communications as "Black Hand" letters—a name that stuck, and indeed, soon became synonymous with crime in Little Italy." The term "Black Hand" (in Italian: Mano Nera, and in Sicilian: Manu Niura) was readily adopted by the American press and generalized to the idea of an organized criminal conspiracy, which came to be known as "The Black Hand Society.” 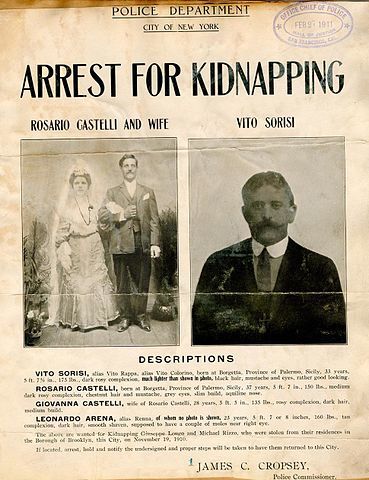 Mod
Leonardo DiCaprio will star in and produce an adaptation of Stephan Talty’s book “The Black Hand” for Paramount Pictures.

The true story about the origins of the mafia in America follows Joe Petrosino — nicknamed the “Italian Sherlock Holmes” — an NYPD cop who goes after the ruthless gang in the early 190os. The thugs (with the calling card black hand) migrated from Italy to America, and kidnapped people to extort money from their families. They were loathed by law-abiding Italian families who were frightened, but nevertheless helped Petrosino behind the scenes.

Very interesting! Thanks for posting this, Jonetta!