Few know it, but the famous playwright J.B. Priestley was also a master of weird fiction. His best strange tales are in The Other Place and Other Stories (1953), nine stories of the odd, offbeat, monstrous and horrific, but always with a slight dose of Priestley's trademark humor. The cover showcases one story, "Uncle Phil on TV", in which one of the first British families to buy a TV set in the 1950s finds it haunted by a vengeful relative. 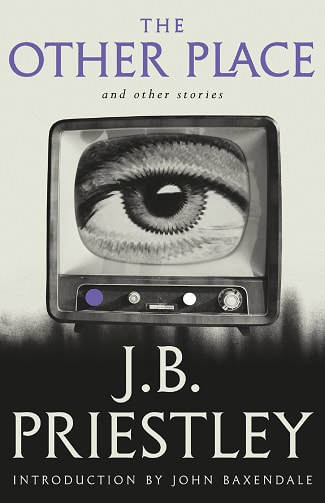 J. B. Priestley was a versatile and prolific novelist and playwright, but in The Other Place (1953) he shows an unexpected talent, proving himself a master of the weird tale. In "The Grey Ones," a man visits a psychiatrist after he becomes convinced that a group of demons masquerading as people are plotting the overthrow of the human race . . . but what if he's not insane? In "Guest of Honour," a banquet speech becomes a horrifying affair when the keynote speaker realizes his audience is made up of monstrous and menacing creatures. "The Leadington Incident" recounts the disturbing experience of a Cabinet minister who suddenly perceives that though the people around him move and talk as though alive, they are all actually just animated corpses or sleepwalking zombies. The nine tales in this collection are strange, fantastic, and often unsettling, and they represent Priestley at his best.

'Priestley is one of the finest and most popular storytellers of the last hundred years.' - Margaret Drabble

'J.B. Priestley is one of our literary icons of the 20th century. And it is time that we all became re-acquainted with his genius.' - Judi Dench

Will definitely be picking this one up!

The Other Place and Other Stories (other topics)