This topic is about Pepe Construit un Nid
28 views
Shout It Out! Self- Promotions > Audiobooks...

The producer, Greg Pond, also produced the Spanish audiobook, which is now undergoing review by ACX. Jim Selleck is producing the English audiobook for this story as well as the audiobooks for the other two books in my childrens storybook series.

Thanks. I also have to say, the Author Central people are terrific. I contacted them yesterday about merging the audiobook page with the page for the other two editions (Kindle and paperback), and it was accomplished by the time I woke up this morning. In addition, the increased number of LookInside pages I had requested be made available for my flash fiction series (requested yesterday morning) were already being displayed last night. Amazon's support--both by phone and e-mail--is simply unbelievable. And I've had the same good help from the people at Kindle and ACX (audiobooks), regardless of where they are in the world (RSA, USA, Costa Rica, Philippines).

Well…you learn something every day.

I just got off the telephone with Samantha at ACX.

Turns out that immediately after an audiobook is published by ACX, it AUTOMATICALLY becomes a candidate for Whispersync and is put through their automated validation process. The process determines how faithfully the voiced text matches the Kindle edition. All extraneous material—frontispieces, copyright pages, photographs, dedications (unless voiced), sound effects, whathaveyou—are ignored. Their system looks only at the text. This process can take up to 30 BUSINESS days or more, which means it could be early October, perhaps, before Whispersync is available for French Pepe. If by that time it’s NOT available, I am to give them a call and they will run their validation process again (although the agent was not sanguine the second run would yield a different result).

Basically, if you have a Kindle edition, there’s nothing you can do to stop the automatic test for Whispersync short of making changes to that edition such as to deliberately “fail” the ACX test.

Just signed audiobook contracts for the fifth book in my Det. Louis Martelli, NYPD, mystery/thriller series as well as for Books 2 and 3 in my Antarctic Murders Trilogy. Recording of Book 1 is just about finished, and it should be available in about two weeks.

Thanks, Carole...the producer also is looking at the YA novel by Alyssa Devine. No promises at this point, however.

Mod
I love the audiobooks. The money is great!

Carole wrote: "I love the audiobooks. The money is great!"

Boy howdy, you're not just whistling Dixie! I just got my first royalty check! Beats kindle and paperbacks any day of the week.

Just signed a contract for an audiobook to be created from my YA novel, The Hypnotist.

I have two audiobooks on Audible through ACX. Science Fiction Fantasies, Tales and Origins is a collection of short stories recorded in old time radio drama format with a complete cast of characters and still in production, Cadet Adam which is a traditional dramatic reading. Cadet Adam should be available sometime in October if we pass all the Quality Control protocols. Science Fiction Fantasies is available right now.

Carol, we still good for that slot on your show in Feb?

The audiobook for my first novel, Full Circle, just went "live" on Amazon's Audibles. This is my 11th audiobook on that platform.

Currently, one more novel is under review by ACX (Frozen in Time, the first book in The Antarctic Murders Trilogy), a Martelli and YA novel are in production, and two more novels in the Trilogy are under contract.

This be where the action is! 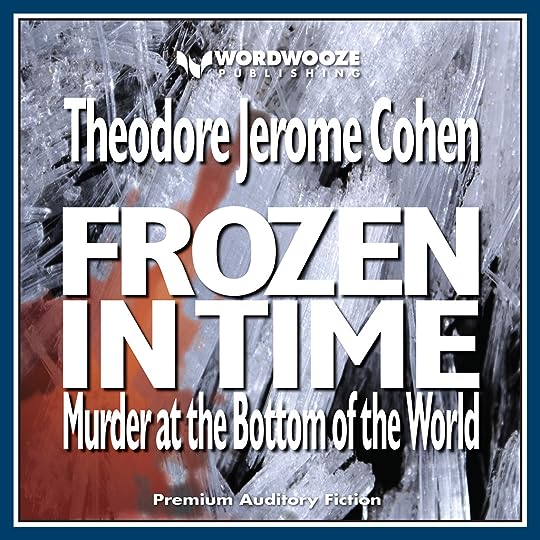 The audiobook for Frozen in Time, the first book in the Antarctic Murders Trilogy, now is available:

The trail from a major theft at the Banco Central de Chile in Talcahuano following the Great Chilean Earthquake of May 11, 1960 leads to Base Bernardo O’Higgins, a wind- and snow-swept Chilean Army outpost on the North Antarctic Peninsula. When Chilean Army 1SGT Leonardo Rodríguez fails to return from a seal hunt in the waters around the base, two Chilean Navy non-commissioned officers, CWO Raul Lucero and CPO Eduardo Bellolio, become LCDR Cristian Barbudo’s prime theft and murder suspects. Fearing he will die, Barbudo reveals the identity of his two suspects to visiting scientist Ted Stone, thereby placing Stone’s life in jeopardy. But who can Stone trust with this information, if it comes to that, to see justice done?

This story is a work of fiction based on real events that took place between 1958 and 1965. It is a tale of greed, betrayal, and murder—one in which the reader is given a window into the frozen world at the bottom of the Earth that few people ever will read about, much less experience. Among other things, it explores why, though seemingly unfair, bad things happen to good people; how the battle between good and evil can change forever even the most innocent person; and most of all, the role deception plays in Nature, Man, and Life. 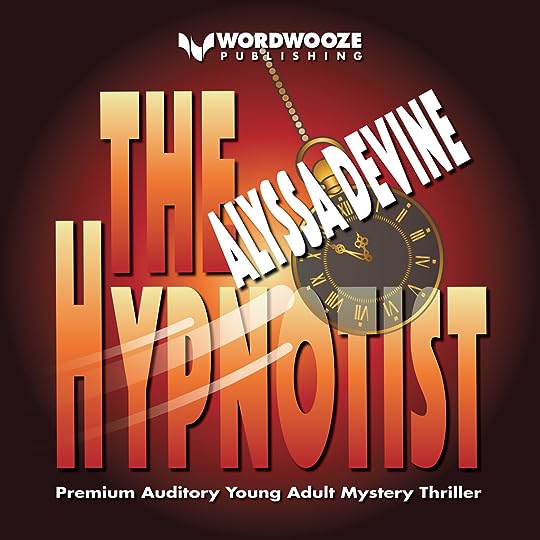 The audiobook for The Hypnotist, a Young Adult (YA) novel, now is available:

When, on an afternoon outing in Bayou Vermilion, Lafayette, LA, teenager Amanda Wilcox has her fortune read by Madam Zu-Zu, she and her classmate, Tom Lassiter, never thought it would lead to her having a nightmare in which she dreamed she was being choked to death. Under hypnosis, Amanda reveals to Tom that she once was a woman named Kyla Decker, who disappeared 25 years earlier after being stopped by a policeman while driving home early one morning after partying with her girlfriends. An Internet search reveals the name of another woman, Cindi Lathrop, who disappeared some years after Decker under similar circumstances. As their relationship blossoms, Amanda and Tom uncover evidence linking a former Lafayette, LA, policeman and a funeral home employee to the abductions, men who they suspect murdered the two women. But then, in what appears to be a real-life enactment of what the fortune teller told Amanda, Amanda and Tom find their lives threatened by one of the two men they think was responsible for the murders committed 25 years earlier. Can the teenagers survive, knowing the last of the five tarot cards read to Amanda by Madam Zu-Zu was Death? The only way to learn the answer to that question is to read The Hypnotist.

Thanks. The woman who did the narration did a terrific job.

Thanks, Carmel. Much appreciated. 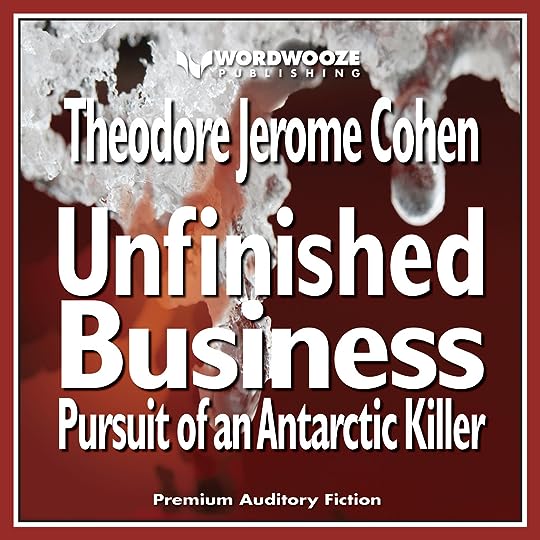 The audiobook for Unfinished Business, the second book in the Antarctic Murders Trilogy, now is available:

Unfinished Business: Pursuit of an Antarctic Killer is Book II of The Antarctic Murders Trilogy. It continues the story of Captain Roberto Muñoz of the Lientur and the hunt for the millions of dollars in U.S. and British cash, negotiable securities, gold coins, and jewelry that were stolen from the Banco Central de Chile following the Chilean Earthquake of May, 1960. The story of the theft and murders that followed is told in Book I: Frozen in Time: Murder at the Bottom of the World. Unfinished Business introduces Captain Mateo Valderas and Lieutenant-Commander Antonio Del Río of the Chilean Navy's Office of Internal Affairs. They have been sent to Arica, Chile, where the Lientur is undergoing repairs, to solve a murder that took place on the naval base. Their investigations uncover evidence that leads them to someone who is determined to settle old scores and wrap up 'unfinished business' on two continents-South America and Antarctica.

The best! Am awaiting approval of the Italian audiobook edition of my children's storybook on bullying.

How exciting for you, Ted! Congratulations!

Carmel wrote: "How exciting for you, Ted! Congratulations!"

The Italian audiobook edition of my illustrated children’s storybook on bullying and making the right decisions, Pepe Builds a Nest, now is available. 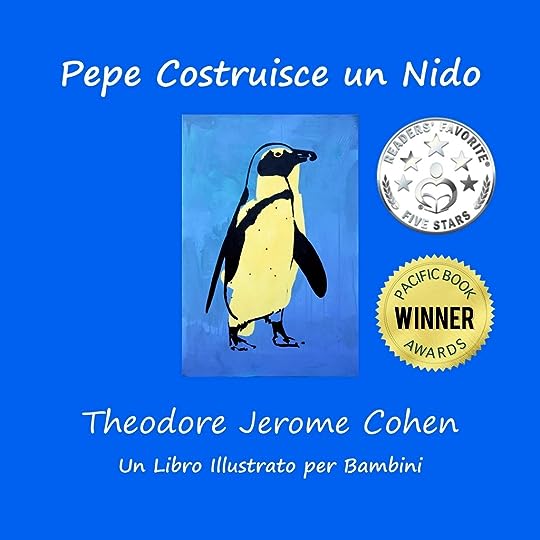 It joins the English, Spanish, and French Audible editions of this delightful book for children K-3 about Pepe, a penguin, who confronts a bully, Otto, who is stealing the stones Pepe is using to build his first nest.

All editions are available in Kindle, EPUB (e.g., for Nook, Kobo, etc.), and paperback editions. The illustrations are in color, and the text of the English edition is in verse.