Mod
Now up for preorder on our website.
Amazon links coming soon

Only two months until our annual October Horror Month celebration, and as we did in 2016 and 2017, we're kicking things off with a volume of horror stories by Valancourt authors. For the first time ever, the book will be available in variant cover editions, so you can choose your own nightmare! The standard edition, featuring the headless phantom, will be available everywhere, but the special alternate cover, featuring a Tiki theme inspired by a story in the book, will be available only direct via our website. Check out the designs by M. S. Corley: 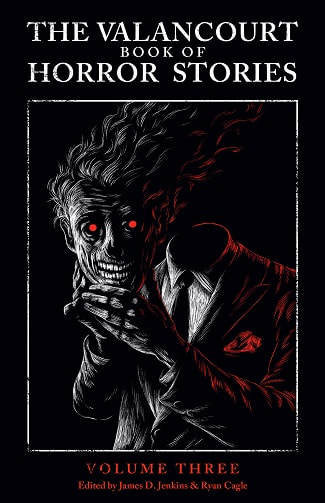 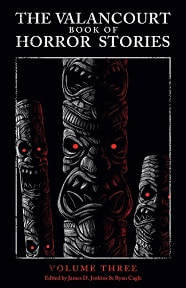 And without further ado, here is a complete rundown of the book's contents (no spoilers, don't worry!)

From his 1971 collection The Unbidden (published in the U.S. in 1975, and not reprinted since), this tale by "Britain's Prince of Chill" is the story of a young boy who unwisely chooses not to follow his grandfather's advice never, ever, to go up them stairs . . .

A young boy disobeys warnings not to enter an old house reputed to be haunted and undergoes a spooky experience. Though the original 1918 version has appeared in a couple anthologies over the decades, the 1941 version, entirely rewritten by Reid later in life, has to our knowledge not previously been reprinted.

This very rare tale by the author of the decadent spider-infested nightmare Tenebrae (1898) tells of two men who lose their way in the Canadian prairie and are forced to take refuge in a madman's shanty, where they pass a particularly terrifying night. Henham is the real name of the pseudonymous "John Trevena", whose tale "The Frozen Man" in our first volume of horror stories received a very positive reader response.

If John Bunyan were a 21st-century master of weird fiction like Steve Rasnic Tem, his The Pilgrim's Progress might have looked something like this brand-new story, written especially for this volume, in which an aging man pays a terrible price for the opportunity to revisit the ghosts of his past.

This now-forgotten Victorian author began her career writing popular romance novels, but later in life she developed an interest for the occult and supernatural, including this story, a traditional Victorian ghost story featuring all the trappings of the genre, including a haunted chamber and unsettling visions seen in a mirror. We believe this to be the first-ever reprinting of the tale.

This posthumous tale by the famous Twilight Zone screenwriter was first published in a now out-of-print limited edition a few years ago and has never been made available elsewhere. It's the story of a man who, after a lifetime of unpopularity, devises a macabre means of making new friends.

"The Poet Gives His Friend Wildflowers" (2018) by Hugh Fleetwood

Fleetwood, who contributed an original weird tale to volume 1 of our series, returns with another new contribution, this time a delectably macabre poem about a gift that is not exactly what it seems to be.

An elegant story set, as with the best traditional English ghost stories, in an old country manor house, where a party has gathered, including one man with an irrational terror of fire and another guest with knowledge of a centuries-old curse on the house.

Higgs, the author of the classic '80s horror novel The Happy Man, which reads something like an earlier and more enjoyable version of Bret Easton Ellis's American Psycho, disappeared from horror writing three decades ago, leaving fans to wonder what happened to him. Well, he's back at long last, with a brand-new tale, and it's so much fun that we devoted our variant cover to it. Because, I mean, Tiki horror!

This tale originally appeared in one of Lady Cynthia Asquith's legendary Ghost Book anthologies. It's the story of a young woman curious to know more about her great-grandmother, a woman who had a reputation as a cruel, controlling tyrant - and who may continue exerting her influence from beyond the grave. A slow-burn chiller that will linger with you.

An uncommon foray into horror for the prolific playwright and novelist Priestley, whose collection of strange tales The Other Place (1953) goes on sale Tuesday and shouldn't be missed by any fan of classic weird fiction. Have you ever had a particularly bad experience in the subway, a real trip from hell? Trust us, it's nothing compared to the journey the guy in this story is going to take.

Purdy, a literary outsider who has been acclaimed by Tennessee Williams, Gore Vidal, Jonathan Franzen and many others, but who has rarely enjoyed much popular success except as a cult gay novelist, contributes this piece of Gothic horror, the story of a covetous young antique dealer who gets more than he bargained for when he tries to get hold of a priceless piece of porcelain from an eccentric old lady.

This tale is from Keir Cross's anthology Best Black Magic Stories, and to our knowledge has not been previously reprinted. We won't say too much about it, but suffice it to say that it involves the Dark Arts, a strange white-haired boy with no soul, . . . and a snowman.

Another elegantly told classic, this one by an underappreciated author of supernatural fiction, possibly best known for Doctors Wear Scarlet (1960), an innovative vampire novel that Karl Edward Wagner ranked among the best supernatural horror novels ever written. We'll say nothing to spoil this one; let's just say that, like the fine wine of its title, it's something to be sipped and savored.

After cruelly jilting her lover, a young woman gets a horrifying comeuppance. A very rare tale, perhaps the lone venture into the horror genre by this popular crime writer, author of the novels that inspired the films The Spiral Staircase and The Lady Vanishes.

Closing out the volume is this gem, which manages the tough feat of being both chilling and hilarious. To our knowledge, this tale hasn't been reprinted since its initial experience; why it's not included in the various "best-of" collections of Westall's tales is beyond us. It's the story of a clerk in the Registry Office who finds herself in an odd predicament when she is called upon to register the birth of the spawn of Satan himself.

Both editions go on sale October 2, and preorder options will be up soon. The standard cover edition will be available in hardcover, paperback, and ebook; the Tiki edition will be paperback-only.

I'll be getting one of each.