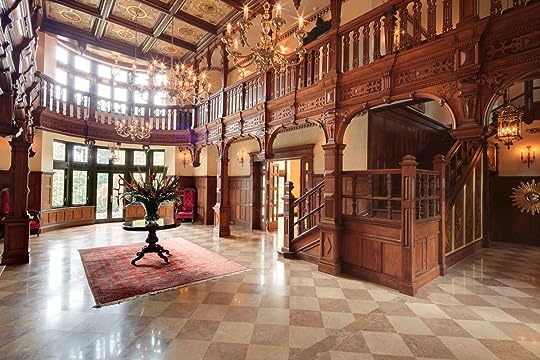 Mod
Indie Darwin waved goodbye to her parents as they drove away, tears pricked her eyes as she watched their car pull away. She wouldn't be seeing them again until winter break, if then. It would all depend on her academics, if she was going well then she would go home, if she wasn't, then she would force herself to stay at the academy, so that she could study more for the next semester. Indie pulled out her phone and took a quick selfie, she posted it to Instagram, hashtagging it #firstday #mylife #aldridgepleaseloveme. Satisfied with her social media post, Indie turned and sighed, she adjusted the bag on her shoulder and went into the grand entrance hall. She wondered where Zoe was, she'd texted her a few times, but her phone was acting up with the texts, so she wasn't sure if her bff was even getting any of her texts. Indie smiled as she took in the warmth of the entrance hall. This would be her year, hers and Zoe's. They would make something of themselves, and Indie was determined to get her friend a boyfriend this year, even if it killed her. Zoe was more of an introvert, while Indie was extremely extroverted. This balanced out the friendship, because Indie pushed Zoe in places she would usually shy away from, and Zoe had her way of making Indie stop to smell the flowers, in a way. Indie started heading down the hall, she would probably go to her dorm first, then head out to find Zoe.

Mod
Slim fingers flew over the screen and headphones were intertwined in curly hair as the girl bobbed her head to the beat of the song that was playing. The girl was adding music to a playlist for her dance team,maybe she could inspire them a little. After all, isn't that what a captain was supposed to do? EJ got a notification on her phone that read she needed to go to the dance studio and work on her routine before tryouts later in the week, because if she wasn't her best how could she demand that of her team? EJ sighed as she got up from the steps that she was sitting on, adjusted her jacket, and started to turn up her music as she began to walk out of the Grand Hall, nodding her head to the lyrics and surveying her surroundings. There was the usual hustle and bustle of some returning students but....oooohhh who was she? EJ set her eyes on a girl that looked a little lost but she was cute. EJ checked the time on her phone. She had a little time to kill, so why not try to chat up the cutie? EJ took off her headphones and she pulled her hair back as she started walking up to the girl with brown and blonde streaks. "You alright there? Need a hand?" EJ offered, throwing the girl one of her signature smiles and looking at her with soft eyes.

Mod
Indie stopped to talk to a teacher that was new, he was asking her directions to the admin building. Indie shrugged her shoulders, not knowing where it was, she suggested he download the campus map on the schools app. That was what her mom had told her to do, she had yet to do it yet, but it was good advice. Indie pulled out her phone and went to the app store to do just that, otherwise she wouldn't know how to get to her dorms. A girl approached her just then, with curly hair, and bright eyes, Indie glanced up from her phone and smiled in return. "Um yeah actually, I'm new this year. And uh I was wondering where the girls dorms are? I was gonna download the app, but if you could tell me, or show me? I'm Indie by the way," she put her phone in her back pocket, feeling good that she might not have to look like an idiot with her nose to her phone trying to figure out the large campus. Who ever this girl was, it was nice of her to offer help. Indie was ready for the new year, the year that would hopefully help her to forget her ex and the bad summer.

Mod
Indie....That's a nice name for a girl like her. I like that.... EJ shook herself from her thoughts and she focused back at the matter at hand."Nice to meet you Indie, I'm Eliza but you can call me EJ. Girl's dorms? It's a little ways from the studio but I can take you there," Eliza smiled over at the girl and openly checked her out, biting her lip. She was cute this little Indie girl, maybe she would try to get at her or maybe she already had a partner. Either way, this girl would be hers no matter what. Long term or short fling she really didn't care but that would be when the girl was not in distress trying to find her room. "So where are you from? How was your summer?" EJ asked as she started to guide Indie out of the Grand Hall. EJ's phone dinged with a notification as her tweet that she had sent out earlier was getting retweets and replies. EJ loved her fans. "You were going the wrong way, but let's go the right way together."

Mod
The other girl seemed nice, and cheerful. Indie could tell that they would get along, and might even click, in a friendly way, maybe more. It was too soon for that line of thinking though, wasn't it? Indie considered the thought, how long was long enough after a breakup? She wasn't sure, and really, should she be thinking of that right then? She smiled in response to EJ introducing herself, she offered to show her where the dormitories were. "Oh, thank you! That helps a ton," Indie adjusted the bag on her shoulder, she began walking the opposite way than she had originally been walking, "Oops." Indie took a minute to run her eyes over EJ, she was cute, and obviously athletic, Indie wondered if she was in any clubs or part of any teams. "I'm from the States, I had a pretty boring summer to be honest. I Netflix binged, ate junk food.... what about you? Where are you from? What'd you do over the summer? Anything fun?" Indie easily turned the attention to EJ, because her summer had been about her heart being broken, and she wasn't really ready to talk about that yet.

Mod
Her summer? Oh, there was definetly a lot that happened over the summer. EJ had slowed down on the photoshoots to focus more on her dancing and her role as the captain this summer because this team was important to her, but nonetheless her agent had booked her up, EJ wasn't complaining though, she got to meet some dope ass people and travel to some pretty cool places but she couldn't divulge all of the details to this girl. EJ's lips turned up in a smirk as she remembered the really wild parts,"Yeah, I did a couple of photoshoots over the summer. Went to Milan again, love it there and also did a lot of travelling and also had time to prepare for this year's dance team auditions. I'm usually a busy busy bee anyways. What part of the States are you from? What's your favorite show on Netflix right now?" EJ shifted her walk so that she started to walk backwards so that she could focus her attention on the girl that she was helping find her way. "I am personally hooked on Riverdale right now, like it just drew me in with the mystery and I looooove me a good mystery you know?" EJ threw the girl another smile and she turned a corner so that they could start approaching the dorm rooms.

Mod
It sounded like EJ travelled a lot, that sounded like fun. She wondered what it would be like to travel with a friend, or a girlfriend, all over the world. It would definitely be an adventure, and more. She liked the thought of going on adventures with a future partner, though she wasn't sure how far in the future that was.
So she was part of the dance team? Cool, she would love to watch her some time, would that be weird? Indie wondered to herself, if she should ask. EJ turned around, and walked backwards, so that she was facing her, as they went. She was skilled, because if Indie had tried that, she would have fallen flat on her face, or her back rather. She wanted to ask questions about her travels, but the tables were turned back on her, so she decided answer the questions she was asked. "I'm from New York, its an interesting city, a whole other world compared to here." Indie liked the small village that was just outside of Aldridge, but this place was definitely secluded compared to the city she was from, "I'm really into Riverdale too! I'm on the last season, episode 16 I think? It's such a good show! Who's your favorite? I'm totally a bughead fan, Jug is my favorite, I can't help it. Though I do like Sweet Pea too. I read fanfiction about him all the time..." Admitting that might have been embarrassing, but Indie didn't care, she loved fanfiction. "Oh, about your travels, what was your favorite part about Milan? I've never been, I think it would be fun to go though."