46 views
Previous Reads: Around the World > Brazil: The Hour of the Star, Clarice Lispector

Mod
This is the thread for our August 'Read Around the World' book. This month we will be visiting Brazil with The Hour of the Star by Clarice Lispector 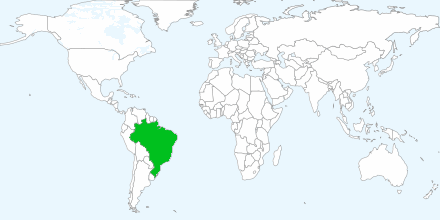 The Hour of the Star (Penguin 2014 blurb)
Living in the slums of Rio and eking out a living as a typist, Macabéa loves movies, Coca-Cola and her philandering rat of a boyfriend; she would like to be like Marilyn Monroe, but she is ugly and unloved. Yet telling her story is the narrator Rodrigo S.M., who tries to direct Macabéa's fate but comes to realize that, for all her outward misery, she is inwardly free. Slyly subverting ideas of poverty, identity, love and the art of writing itself, Clarice Lispector's audacious last novel is a haunting portrayal of innocence in a bad world.

Clarice Lispector
Clarice Lispector was a Brazilian writer acclaimed internationally for her innovative novels and short stories. Born to a Jewish family in Podolia in Western Ukraine, as an infant she moved to Brazil with her family, amidst the disasters engulfing her native land following the First World War.
While in law school in Rio, she began publishing her first journalistic work and short stories, catapulting to fame at the age of 23 with the publication of her first novel, Near to the Wild Heart (Perto do Coração Selvagem), written as an interior monologue.
She left Brazil in 1944, following her marriage to a Brazilian diplomat, and spent the next decade and a half in Europe and the United States. After returning to Rio de Janeiro in 1959, she began producing her most famous works, including the stories of Family Ties (Laços de Família), The Passion According to G.H. (A Paixão Segundo G.H.), and Água Viva. Injured in an accident in 1966, she spent the last decade of her life in frequent pain, steadily writing and publishing novels and stories until her premature death in 1977.
Lispector has been the subject of numerous books, and references to her and her work are common in Brazilian literature and music. Several of her works have been turned into films. Recently, her works have been the object of an extensive project of retranslation. She is the first Brazilian to be published in the Penguin Modern Classics line.

Sofia will be leading discussions

My copy should be here by Saturday. I’m so excited about this one. I’ve heard so much about Clarice Lispector but I’ve never actually read her short stories/novels.

Who else will be reading along? :) Are any of you familiar with Lispector’s work?

I have ordered the book and hopefully it will be here next week. I haven't read any other works by this author.

Has anyone else read this book yet?

I just received a copy in the mail, but probably cannot start until the weekend. Am looking forward to discussing it with you all!

I read this short novel recently and would like to join the discussion.

Sophie wrote: "Has anyone else read this book yet?"

Yes I read the book but have been away on holidays so hadn't got around to commenting yet.

It was an interesting novel about the process of writing. At times that can be a little frustrating as the narrator is constantly interrupting the flow of the story about Macabea to discuss himself and his process.

One of the comments that kind of stuck with me was his insistence that while this story could be told by another writer, it needed to be told by a male writer because a female author would be excessively sentimental. Yet his narration is full of pity and compassion for Macabea.

Did anyone else wonder about Lispector's reasons for choosing a male narrator to tell this story? I wondered if it was an attempt to counteract that male attitude to female authors.

The development of character is fairly sparse due to both the shortness of the work, and also the style of the narration (with the narrator's constant interruptions and the desire to talk about himself), yet I found Macabea to be a fascinating and tragic character. I don't think I have ever encountered a less self-aware person and she definitely provides a juxtaposition to the narrator who seems to be self-absorbed.

What did people think of the ending? From the way that the narrator kept speaking of his connection with Macabea, I kept expecting a revelation as to how he came into contact with her. This was never revealed during the story. It left me wondering whether (view spoiler)[ he was driving the Mercedes . (hide spoiler)]

Personally, I found the ending a little bit obvious and announced by the fortune teller, so no surprise here. However, I was disturbed by the absence of dialogues throughout the book, except for the last part, which made me quite unsettled. And I agree with you, Liesl, about the character development, Macabea is indeed a fascinating tragic character whose fate might be announced through her name.

Liesl wrote: It was an interesting novel about the process of writing. At times that can be a little frustrating as the narrator is constantly interrupting the flow of the story about Macabea to discuss himself and his process. .."\
I think the story was more about the writer than Macabea. She was his unlovable, unsympathetic and ugly character. She leads a difficult life, but seems to be oblivious to this fact. And he tells us in the end he can do whatever he wants with her.
My personal feelings about this book was annoyance and (almost) anger. Can a person go through life being so mistreated without feeling they could do something to better their situation? Is that where the author was going with this before he decided to heck with it?

It is an excellent book to read.

Sophie wrote: "Liesl wrote: It was an interesting novel about the process of writing. At times that can be a little frustrating as the narrator is constantly interrupting the flow of the story about Macabea to di..."

It is heartbreaking to read about someone like Macabea and think that there might really be people like that in the world. However, I do think it is possible that a person who was orphaned at a young age and raised by a cruel, unloving relative could be ignorant of the fact that they might deserve, or at least have the right, to be treated better. Who in her life has nurtured any belief that life could be better? Plus, being poor, unattractive and unhygienic does not create a circumstance in which other people would care enough about her to help her or make her aware of how she could improve her life.

Given all of that, it does seem hard to believe that this narrator, a wealthy man, would take notice of someone like Macabea. It seems that it is (view spoiler)[ her death that teaches him something and leads him to write this story.

Also, has anyone else wondered about the title, "The Hour of the Star"? (hide spoiler)]

Mod
I'm late to the discussion but I finished this last night. Wow. It definitely is a book that stayed with me after I finished. I think, unfortunately, that like the author says, there are thousands of Macabeas in the world. hundreds of thousands. Millions! There could be a billion or more women in this world who are barely eking out an existence working with no education, no goals except the next pay day's trip to the movies.

Liesl wrote: "Given all of that, it does seem hard to believe that this narrator, a wealthy man, would take notice of someone like Macabea. It seems that it is (view spoiler)..."
LIESL, I find your theory about the narrator very likely! I was tossing the idea around all night wondering who he might be and your comment was like a bolt of lightning. I want to read the ending with the Fortune teller again, I think there are more clues there in her fortune. I also got the feeling right off the bat that the narrator was so haughty and arrogant and explain-y that he must be coming from some place of guilt? He's ranting and raving and nonsensical. It makes no sense for an unknown narrator to ping pong through such fierce emotions over Macabea.

Liesl wrote: "Also, has anyone else wondered about the title, "The Hour of the Star"?.."
Again, I may have to re-read the ending, but I wonder if this is a reference to the time Macabea left the fortune teller? I seem to remember her mentioning the stars in the sky.

The Hour of the Star (other topics)