Congratulations as the new dawn of hope shines upon our new Pakistan.

I pray that Almighty ALLAH bless us all and bless our leader, Imran Khan to live upto our dreams and expectations. Ameen .


Aren’t they against the rules

Yes, sir it is not in rules but rules are meant to be reviewed from time to time

Ms Qazi, Naya Pakistan dream is now becoming a reality and this discussion topic is just an expression of joy.

Don't worry, we all will go back to our books.

The 'boys' really did it this time. If only Jibran Nasir had assented to the boys...

Well, let's see what IK is worth.

Genio wrote: "The 'boys' really did it this time. If only Jibran Nasir had assented to the boys...

Well, let's see what IK is worth."

Bilal wrote: "Genio wrote: "The 'boys' really did it this time. If only Jibran Nasir had assented to the boys...

Well, let's see what IK is worth."

Mod
I think this is quite a controversial topic and true is does goes against our policy.
Everyone has the freedom of expression but ik is a touchy subject for most people. I would suggest u guys dont make him a topic of discussion here. 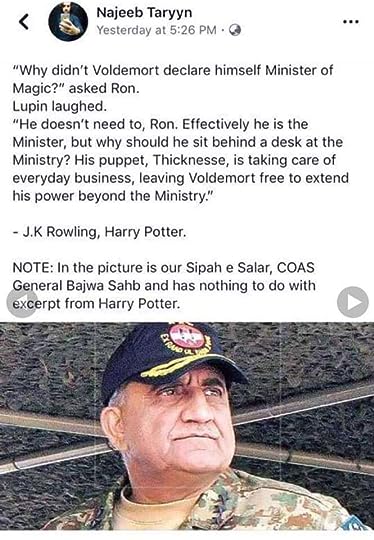 Mod
Asad wrote: "This is not my personal opinion. It's a meme I came across that made me laugh out loud.

haha nice. But its not him. Its the bureaucrats & intellectuals who decide everything..

reply | flag *
message 12: by [deleted user] (new)
Jul 30, 2018 01:04AM
What exactly does 'intellectual' mean? I used to hear that word a lot in the past when people wanted to talk about some vague and powerful group of people working behind the scenes.
Can't anyone, from any group of people, be an intellectual? Can't army people be intellectual? I met a taxi driver who was really intellectual, but he didn't decide anything of importance.

Aakash wrote: "Asad wrote: "This is not my personal opinion. It's a meme I came across that made me laugh out loud.

haha nice. But its not him. Its the bureaucrats & intellectuals who decide everything.."

What intellectuals? Oreo Maqbool Jab, or Khadim Rizvi? As far as I know, even those towering intellects don't decide a thing.

Asad wrote: "This is not my personal opinion. It's a meme I came across that made me laugh out loud.


HAAHAHAH omg, this might be the first time I've gotten something useful out of Harry Potter.

I agree with asad. What intellectuals are we talking about. The only thing that comes to mind is ISI but why would they want to choose a leader. Koi faida hee nahi hai on ko. It’s the army they are getting more than half of the money. 65% when I last heard. Ofc they would choose someone who gets them some moula. But anyways I think this topic should be closed cuz it’s too controversial. Even I a chill guy who has gotten in trouble too many time shared my opinion which most people will prob not agree with.... lets just hope my English gets better and that imran khan improves the state of the country. Ameen.

Mod
Asad wrote: "What exactly does 'intellectual' mean? I used to hear that word a lot in the past when people wanted to talk about some vague and powerful group of people working behind the scenes.
Can't anyone, f..."

I think he meant by 'intellectuals' the people who occupy positions in halls of power. As you mentioned being intellectual alone doesn't mean much if you don't have a medium/source to influence others. The best an intellectual taxi driver can do is influence his rides or his acquaintances unless he acquires another medium.

Mod
intellectual means the thinker... who actually runs the country... country is not ran by these Fsc passed or fake degree holders... the solidarity of the country is governed by people with power who really are capable of doing it. Faheem explained very well.

Aakash wrote: "intellectual means the thinker... who actually runs the country... country is not ran by these Fsc passed or fake degree holders... the solidarity of the country is governed by people with power wh..."

GENIO I CAN LEGIT HUG YOU RIGHT NOW! True the boys did it :"D
For everyone wondering, we never had a true form of democracy in our country. NEVER. Our governments are always established with the help from military establishments. People celebrating the start of a new era: sad to tell you this but all this ain't really new.

We may think that our political leaders are powerful and intellectual but they're not. Look what they did to Nawaz Sharif once he started speaking against them. Blindly supporting the military is not patriotism.
Also, look around you. PTI won in areas where they could not have won. They won with differences of a few hundred votes. And for its worth the recounting is also very much rigged. Also, search for HRCP's press conference on military interference in media. You will see that HRCP has talked to various different journalists and those journalists have admitted that they have received press advice, threats and bribes from military establishment. After this press conference, a judge of Punjab did a press conference where he said that military personnel often came to the courts and changed the benches that presided over a certain case. (The bench presiding over Sharif's case was also very much pro-Army).
TBH i think anybody who still thinks that we live in a free country, where media, judiciary and parliaments are free from the influence of a higher power then that person is EXTREMELY naive :) good day.

Mod
Genio wrote: "Aakash wrote: "intellectual means the thinker... who actually runs the country... country is not ran by these Fsc passed or fake degree holders... the solidarity of the country is governed by peopl..."


lets hope the level of corruption is lowered... thats all i can hope of right now...

hehehe, when the front man of your new leader aka Jahangir Tareen is actively participating in governmental affairs despite of the fact that he is na ehl from the SC, then corruption ain't going anywhere.

reply | flag *
message 23: by [deleted user] (last edited Aug 02, 2018 09:10AM) (new)
Aug 02, 2018 09:08AM
Yeah Faheem, it's obvious that people who decide important things would be in the halls of power. My point was about the misuse of the word 'intellectual'. From what I've seen, most of our bureaucracy, politicians, armed forces etc are hardly intellectuals. They're typically people with a greed for power, and that's what enabled them to reach their positions of power. Intellectualism has nothing to do with it.

PS. Be careful guys. This is a public forum, so don't disrespect the army. The TV has been showing news that anyone who insults the army can be arrested for treason. Lol

Mod
I made that obvious point for less obvious reason ;) lets put that aside. it wasn't related to subject at hand. :)

Anyways. I am afraid, I disagree with your assessment "most of" bureaucracy, armed forces command (I am assuming you meant higher ups rather than hundred thousands of foot soldiers/staff)
being hardly intellectuals, leaving aside politicians for now. On the contrary majority of people belonging to these groups are indeed people of high aptitude and intellect, that is made sure through the multilayer selection criteria. Now having good capabilities doesn't mean they would be righteous or driven by goodwill. Greed alone doesn't lead to the power, you ought to be much smarter than herd you intent to control.

Even if the people in power have good intentions they can still be on and devasting path in their pursuit of these well intended plans that would bring destruction instead of salvation. Ironically the stronger one belief in one’s conviction of good the more adamant one becomes, rejecting all the contrary information. It can be easily observed in ideologues, religious/non religious. Now, the bureaucracy and army high command higher ups, thinking very highly of themselves and having access to so much information (unknown to most of the people) very often come to conclusion that are indeed the best people to decide what is good for the country. Lo, they decide.

Having said that, it must also be said that they aren’t as powerful or as much in control as they like you to believe. Their power n control and their willingness to wield it varied from time to time. It never stayed constant. Crown of power needs a head to rest upon, if political brass can’t provide one something else will.

Pakistan never had freely elected civil government with full control but it also never had a real dictatorship. The ruling class; both establishment & politicians have their fair share taking Pakistan where it stands now (ignoring role of other forces for simplicity). Yet, all is not lost. There is progress though at snail’s pace. In the last decade politicians acquired more power than they ever had before, establishment’s role receded a bit, from controlling things to managing them.

Power demands responsibility, something our politicians were not very keen on taking, it is changing too, lot of politicians have realized it and those who didn’t were washed away, some narrowly escaped (compare the effort the politicians had to put in their campaigns this year and years gone by). It might be tempting present everything as orchestrated, the reality is much more messy and chaotic. We live in an imperfect country existing in unfair and cruel world. If it could’ve have been much better, just remember it could also been much worse. Democracy, even if scathed, is the correct way forward.

Mod
Asad wrote: "Yeah Faheem, it's obvious that people who decide important things would be in the halls of power. My point was about the misuse of the word 'intellectual'. From what I've seen, most of our bureaucr..."

the word intellectual is not used wrong rather we have people on those positions who do not deserve to be there.. so problem is with us not the word.