Mod
Comments on this board should be written with the assumption that not all readers have finished the book. Please avoid revealing any spoilers.

FYI: Those looking for copies of this book may be able to find both print and audio copies on Hoopla if your library subscribes.

Mod
I’m on board with this one. Listened to the author read a month back. Contemplating the audio.

I listened to the audio via Hoopla and thought it was great!

Mod
This will be my next read when I finish the 3 I'm working on right now. Hoping to start next week.

I just started Southernmost last night, and am enjoying it so far.

I think it's great -- mine is the traditional HC read.
Laura, is there really audio available too?

Mod
Yes sir, hoopla is carrying digital and audio copy both. This may be the "big read" this year. House is doing a ton of readings with fans promoting the new release. I have the HC too but it is now signed and hubby is touchy about signed books, like in "do not touch, borrow a copy." HA! Ha!

Mod
I am with Diane, probably next week when I start.

I have seen House's touring schedule. Elaborate! Especially in the South.

I’m right there with your hubby, Laura. I have at least 30 signed copies of favorite books, all in a special place, and not one has been opened. Kindle or library for those :-)

Mod
Started this today. The constant rain and flooding hits a nerve, since it has rained, (downpoured) every day for a couple of weeks now. There is no place else for the water to go since the ground is saturated. And I don't live in the mountains on a ridge, but in the lowcountry of SC, so climbing higher to escape is not an option. So you might say I am fully invested in this story from the get-go.

Chicago may be corrupt as hell, and the district we live in (just west of Lake Michigan) may not even be possible if settled today because of environmental regs. (it's essentially a drained flood plain) but I must say I am proud of our paved and lit back alleys, our storm sewers, underground utilities and railroads that overpass vehicular roads. A bad rain helps replenish Lake Michigan. Newer areas such as the trenches sculpted to hold some Interstate Highways, and suburbia -- those are the places that flood so badly up here.

Right now we could use a little rain. Ironic, isn't it? By the way, ten years ago my partner and I spent Christmas week in Savannah and had a lovely time -- I hope we can return to the region some day, visit Charleston, and take in the low country and "Coastal Empire" in between. Chuck has already developed a happy ability to cook shrimp and grits, which I take as a good sign! - a.s.

Oh but my God, flooding in the mountains. My late Aunt Mabel lived in Lynchburg, VA, in 1969, when "she was no lady" Camille passed by just north of town and disgorged. Several dozen people living near the Tye River, a tributary of the James, are still unaccounted for and the Southern Railway lost its mainline bridge over the Tye.

Lynchburg sat comparatively 'pretty' as it is located mostly on bluffs above the James on "Seven Hills -- like Rome" as dear Aunt Mabel used to say. Gosh, I miss her. She died of natural causes in 2008.
Flooding -- it's hard to say whether flooding or tornadoes create the worse sense of utter helplessness. But the devastation of flooding can be much more widespread.
(Which means, I thought Silas House started off SOUTHERNMOST wonderfully -- he had me hooked from the git-go.)

Mod
I just remembered something Silas house mentioned at his reading. I may have mentioned earlier but every billboard he writes about in his book is an actual sign he saw when traveling in the south. He said this was a reflection of the south.

Oh, I remember when "SEE ROCK CITY" on Lookout Mountain near Chattanooga, Tennesse, had its message on barns, billboards, signs and even birdhouses (for purple martins). They amounted to total saturation advertising in the mid- and Deep South. Supposedly when the Interstate highways were built it was going to put an end to all that commercial pollution, but Lady Bird Johnson notwithstanding, the advertisements followed. 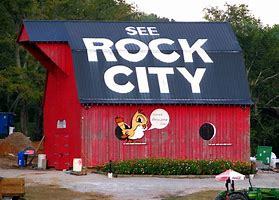 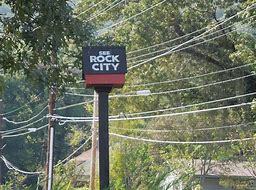 I've been to Rock City, and I'd rather have a birdhouse.

Mod
He said some were absolutely cruel, I just started book but I’ll pay attention. This fictional town where the book starts out is somewhere around Tracey City, TN outside of Nashville if I remember this correctly.

Mod
I'm glad you mentioned that Laura, because I was thinking the author went overboard on some of those signs, because they couldn't possibly be allowed on the roads. That they were real?....OMG!

Mod
In his opinion, he said the South represents all the good and the bad we see in our country. I don’t want to debate that statement but I think that was what he’s trying to show with the signs he points out in book. I’m Not to any bill boards yet.

You should check out the Wikipedia article for Tracy City, TN.
Funny little burg!
https://en.wikipedia.org/wiki/Tracy_C...

Mod
I got wrong place it was Ashland City...different county. Sorry! Thanks for jogging my memory.

Mod
Maybe that's why he named the main character Asher.

Mod
Josh (hubby) says he just liked that name but he did say there are a lot in his area of KY. That was a question asked, why that name.

"Asher" also has biblical connotations. It is pretty much the all-purpose relative pronoun in Ancient Hebrew. When Moses asks God (YHWH) who he is, the Hebrew scriptures say God replied "Eyer asher Eyer" which, due to the flexibility of the pronoun, can be translated "I am what I am" or "I am who I am" or even "I am that I am." Before you say that an upriver Pentecostalist minister would not know such a thing, he might indeed -- and Silas House may have, too.

I do admit at this point it's just a theory on my part.
Also, isn't "Asher" one of the twelve tribes of Israel?

Mod
They way he talked I didn’t think he mentioned Ashland City or cheatham county in the book, but he does.

Clever author! This verbal symbolism must be deliberate, at least most of the time.

BTW I checked, and Yes, one of the Twelve Tribes of Israel is indeed Asher:
https://en.wikipedia.org/wiki/Twelve_...

Silas House is one hardworking author!!

Silas lives in my town, so I get to hear him often. The Key Wesrm link was great for me, as I am quite familiar with the reference he made and thought it was a great choice for contrast.This was my favorite of all his books thus far.