The Many-Coloured Land by Julian May
This is the Science Fantasy novel that gave Mark Lawrence his taste for mixing fantasy and science-fiction! The concept intrigued me (time-travel, mammoths and psychic aliens?) and it won the Locus Award in 1982.

The Summer Dragon by Todd Lockwood
Because dragons.

City of Lies by Sam Hawke
My new release choice of the batch! Praised by one of my favorite author, Robin Hobb, this debut novel blends fantasy and murder mystery. The focus on poison and the art of proofing can make for a refreshing read for those tired of assassins.

Sea of Rust by C. Robert Cargill
Told through the perspective of a robot, the novel (according to the reviews) explores what it means to be human.

The Golden Key by Melanie Rawn, Jennifer Roberson & Kate Elliott
This door-stopper of a book is written by three authors. I was drawn to the magic system (via painting) and the court intrigues & political schemings that seem to be heavily featured in this book.

May the best book win!!

Thanks for your awesome nominations, Virginie. :D

I am torn between The Summer Dragon and The Golden Key.

For now I will go with The Golden Key, but my vote might change later on. ;)

Mod
I've read The Summer Dragon. It's good but I'd put it at a middle school level.

I haven't read the others so I have to do a bit of research.

City of Lies looks interesting too. :)

That was my vote.

Great choices. I'm intending to read Sea of Rust in August but I've also had my eye on City of Lies so I think I'll vote for that!!

That was my vote."

I am trying to stick to standalone books until the end of the year to clear my series a bit more. When I get under 5 I will be able to splurge again. ;)

Mod
Scott wrote: "I've read The Summer Dragon. It's good but I'd put it at a middle school level.

I haven't read the others so I have to do a bit of research."

oh, yeesh. Middle school?? That was one of my picks, but considering how much trouble I had with Starless being for a younger audience, you've frightened me.

I didn't think this through when I signed up for the nominations... I don't know where to place my vote! I want to read 'em all!

They all look so interesting, it's hard to choose!

Ohhh, I loveee dragon books, but I also love time travelling. It is so hard to choose lol

Mod
Niki Hawkes wrote: "Scott wrote: "I've read The Summer Dragon. It's good but I'd put it at a middle school level.

I haven't read the others so I have to do a bit of research."

Those fleeing for their lives. :P 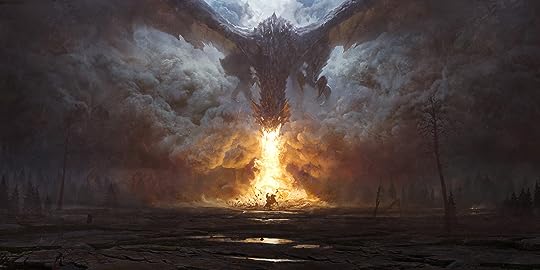 That art is amazing!

Mod
lol you all crack me up.