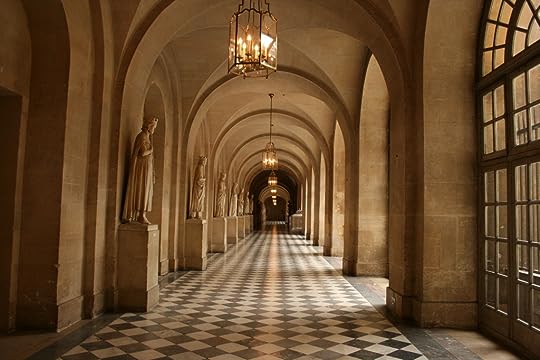 reply | flag *
message 2: by [deleted user] (new)
Jul 22, 2018 06:37PM
Wolfe stepped out into the echoing halls, eyeing the statues of people with a wary eye-even offering a full fledged snarl to some. It made Wolfgang think of statues he'd seen throughout his life, many praising murderers-of course, he had done (and would still do) his fair share of killing. But... But some of the heroes, like in ancient Greek times? They would mercilessly chop the heads of poor snake haired maidens and that just didn't sit right with Wolfe. Medusa never did anything wrong, but then Wolfgang had to remember-it was a story, one far from the now.

It didn't make him any less disgusted. He grew to hate statues that put certain people above others-no one was above their peers. He began to hate statues, period.

Snap out of it, the warlock reprimanded himself silently, realizing he'd come to a full halt beside a stone column.

Mod
"It seems the tremor's effected just about everyone. Curious isn't it, that a single flick of a man's wrist can set an entire population on edge" Oliver's voice echoed off of the walls as he leaned against the column just behind Wolfe. He hadn't been there moments before. But he was now.

His arms were folded neatly over his chest, eyes narrowed just slightly at the man as he tilted his head and watched, expectant for a response.

reply | flag *
message 4: by [deleted user] (new)
Jul 22, 2018 08:05PM
"Not so curious when that man really isn't completely mundane," Wolfgang responded immediately, recognizing the speaker seconds after he spoke. The warlock's red eyes-which always seemed to glow, beckoning you, but the black of his eyes ((where white should've been)) warned most people away from Wolfe. Wolfe with his dangerously sharp canines-making his nickname fit quite well, Wolfe who was so apathetic but so sharp tongued that getting in trouble had become second nature.

Wolfe, who was now facing Oliver-a person equally as unique. "So, here I thought you went after that guardian angel," Wolfgang smirked, a blind child would've sensed the bubbling tension between Oliver and Jason-but Wolfe hadn't commented too much on it until now.

Mod
"Perhaps later. There's always... time." he deadpanned, his own eyes almost unblinking. And when he did blink, it was quite slow. He stared as if fixated, as if studying Wolfe closely. His voice sounded whispy, like echoes of the wind itself. "So is it your plan then? To defect?" he questioned. His tone more curious than anything.

reply | flag *
message 6: by [deleted user] (new)
Jul 22, 2018 08:22PM
Eyes still locked with Oliver's, Wolfgang felt the left corner of his lip lift up, making his smile a crooked one-the one people saw, and which made them check their wallets. Or themselves, to make sure they hadn't secretly been cursed. "I don't make plans," the warlock said simply, "And you've probably heard all about how easily swayed and how untrustworthy I am," Wolfe added, making a mock expression of seriousness.

Mod
"No" Oliver interjected, "If you think I'd bend under the pressure of petty gossip, you've got the wrong idea. While unfavorable of a choice it may be - defacto sure is beneficial to you, as it stands. In the short term. And people typically tend to grasp at what benefits them as soon as it possibly can. I was... curious." he explained.

reply | flag *
message 8: by [deleted user] (new)
Jul 22, 2018 08:30PM
Face falling back into it's usual grey area between contemplative and devoid of all thought and feeling. Left brow raised, Wolfe's lips flattened into a straight line, "I do what benefits me-that's it. Because in the end-it won't matter. Long term or short term, these things die out. And if they don't, and I die-that doesn't really matter, either."

Mod
"Ah so you're... a chaotic nihilist. Careful there, that might tumble unpleasantly into anarchy." he pointed out before shaking his head slowly, "But yes, it does matter. Perhaps not to you, nor to anyone around us. But it far matters more than you realize."

reply | flag *
message 10: by [deleted user] (new)
Jul 24, 2018 02:48PM
Wolfgang's lips tipped upward into a humour-less smile, "Perhaps. I value some things in life, but all in all, we die and that's just how things are." How things should be. He didn't say that. "Life will go on even with my death, your death, or anybody's death. It may take years, but in the end the plants still grow, winter still comes by and eats away at Summer's beauty before Spring comes back. It's a continuing cycle until the end of everything."