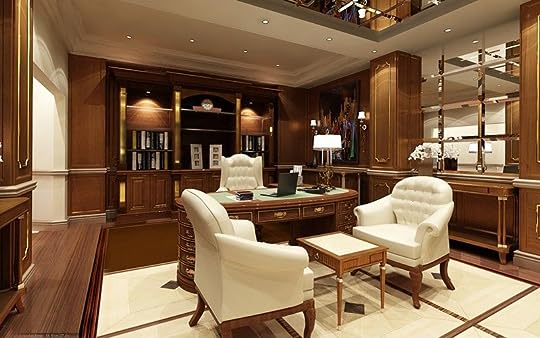 two stories, two offices in one, both respectively for hyunwoo and cara

Hyunwoo was struggling. The migraine still hadn't gotten much better, but he had forced himself to work – he couldn't expect Cara to do all the work. He'd stood up for less than a minute to get a folder from the bookshelves and had to sit down for the next five minutes before trying again. This was Hyunwoo's least favourite part about all the other primordials, honestly. The lack of consideration for his health, the way that their imbalance affected him, frustrated him to no end. Why was it too much to ask for him to be able to stand up straight?

When he felt it, he was standing, about to head up the stairs to Cara's office. The pain was quite literally blinding, and Hyunwoo felt his legs fold underneath him. Another one's been released, he realised, struggling back to his feet. It was messy, uncomfortable – even worse than before, because at least there had been a pattern then. He began to make his way towards the stairs once more, but another wave of pain forced him back to the floor, one hand pressed to his forehead as though it would stop the pain.

Mod
Things had been running so smoothly in Portermount because there was only neutrality and lawful goodness. Those were the only two striving forces within the vast regions of the dimension - and now things were tilted and wrong and awful and she was beginning to lose it. When she felt the release she nearly kicked her desk over the side of the railing, throwing everything to the floor and growling loudly, panting in anger. "Are you fucking kidding me?!" she shouted.

And she would have continued, if she hadn't heard Hyunwoo fall. She blinked, approaching him and turning the corner, "Shit- are you okay?" she asked, kneeling beside him and setting a hand on his shoulder, trying to alleviate some pain with warming energies.

Hyunwoo felt the hand on his shoulder, and vaguely felt the pain ease. "Give me a minute." It was worse than it had been in the past — worse even than when Cara had locked them all away. It made no sense for it to get so much worse, though, even if it was throwing everything off-kilter more. One more and it'd be relatively balanced — although he doubted that whoever was releasing the primordials would choose Lawful Neutral. He'd settle for Lawful Evil, that would balance everything out a little better, but he wasn't sure how badly another release might affect him.

After a few seconds, he moved to a more comfortable seated position, leaning his head against the wall. "At least it wasn't another extreme, though." Hyunwoo was fairly sure that if they'd released another extreme, he'd be nowhere near functional right now. As it was, he couldn't think straight and his head was pounding and his breathing was unsteady, but he was awake and all the lights were still working. He had a bad habit of accidentally unleashing waves of energy that killed the electronics around him when his mind or body was under way too much stress — it was probably his magic's attempt at alleviating his migraines by removing any light or noise. "If Chaotic Good's next, I'm going to actually find whoever's doing this and murder them." An imbalance that severe would be terrible for his health, and he wanted to actually get to see what the art club had been doing recently.

Mod
Cara sat down beside him and pulled her knees to her chest as her hair draped down on either side. Her eyes narrowed towards the ground as she gritted her teeth, completely and utterly distraught, but she was maintaining her composure relatively well. "They'll keep doing it. They'll keep letting them out - they're going to turn us into warmongering barbarians. We had peace and now everything's sliding down the fucking drain because they can't get it through their thick fucking skulls that this is for the greater good" she bickered, glaring away.

Hyunwoo sighed. "I feel like there's more to it. There's got to be someone else behind all this, someone who freed him." He closed his eyes, the blurriness of his surroundings only worsening his headache. His glasses had fallen off when he'd fallen the first time, but the pain had been great enough that he hadn't noticed. They were probably broken, and he wouldn't be able to find them anyway – not with his eyesight. He thought about what Cara was saying. It was somewhat true – but there had been relative peace before, even with the others around, and peace got boring after a while. It was the nature of beings to want excitement and interest, and depriving them of chaos was going to backfire sooner or later. But he kept quiet. She was already angry, he didn't need to provoke her more.

Mod
Cara considered his words carefully and seemed vaguely concerned. Not for him really, but she feigned as much. She took his glasses, gently wiping the glass with the cotton of her shirt. "... There had to have been someone to release Tobias to begin with" she muttered quietly, furrowing her brows, "And if that's the case it had to have been someone who has access... or at least some indirect form of access, to my artifacts... someone close" she glanced at Hyunwoo, but that thought left as soon as it came. He wouldn't sabotage himself for something that silly.

"So there's a traitor within Addermire," Hyunwoo murmured. "Old enough to know about primordials – old enough to care – and either powerful enough or skilful enough to steal something and remain undetected." His breathing grew unsteady as the headache increased in intensity once more, and he slumped against the wall, eyes screwed shut. "If they release all of them, by the end of this I'm going to be immune to pain. I think breaking a leg is less painful than this." Hyunwoo had always had a high pain tolerance, which probably stemmed from the numerous times he'd severely injured himself as a child, but this was getting ridiculous.

Mod
Increasingly perturbed, Cara narrowed her eyes, "You're right" she whispered, furrowing her brows and clenching her hands into fists so tight that her knuckles whitened and she could feel her nails digging into her palms. "Some treacherous cow got ahold of one of my artifacts" she grumbled.

Hyunwoo opened his eyes, slowly and carefully. Everything was blurry, and he felt dizzy, but he persisted. Closing them again would only make it worse later. "Now I know how drunk people feel when they wake up with a hangover." He leaned over, resting his head on Cara's shoulder and pulling her into a hug. "We'll find them, stop fussing. You need a clear head to deal with this. Now, do you know where my glasses are?"

Mod
Cara glanced at him and rolled her eyes, holding the glasses out to him, "I have a perfectly clear head - clear enough to deal with this, you're the one with the splintering headache" she grumbled, taking a deep breath to calm herself. They were ruining all of her progress.

Hyunwoo took the glasses, and breathed a sigh of relief as his vision came into focus. Blurry vision was so annoying. "You're angry and stressed, that's hardly clear-headed," he pointed out quietly, careful not to say the wrong thing and frustrate her even more. "We'll find them. Together."